I know that I may have seemed especially negative as of late (sorry, it's been a bad few weeks personally), but don't blame the messenger for what I am about to show you, blame the math. At this rate, Booster Gold Volume 2, #50 is looking like a double-sized final issue. 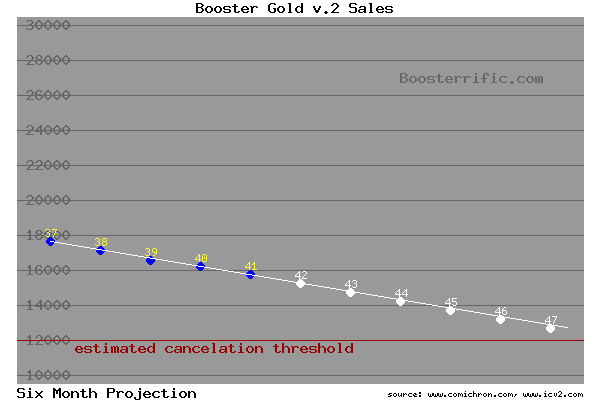 Disclaimer: I'm not T.O. Morrow. I can't say that I looked into the future and saw the actual sales figures for issues 42-47. (Sales data for issue 42 won't be available until next month, and of course there's no telling what can happen during Flashpoint.) I can only say that the slope of that white projected sales line is pretty well defined by recent sales trends.

It might be time to start buying two copies of each issue if you want to keep Booster Gold alive.

harry posted on Mar. 17, 2011 at 8:42 PM
It does look bleak. Be nice if the curve flattened more. Our hope is for a sustained Flashpoint bounce... and perhaps a JLI ongoing?

Jesse posted on Mar. 19, 2011 at 11:33 AM
I would hope the return of Jurgens should bring back some of the people who couldn't handle DeMatteis.