DC has certainly produced some fantastic titles in the war genre, resulting in an endearing legacy of memorable characters, including Sgt. Rock, the Unknown Soldier, and G.I. Robot. But since this is a website devoted to Booster Gold, one DC war hero springs to mind before any other: Enemy Ace. 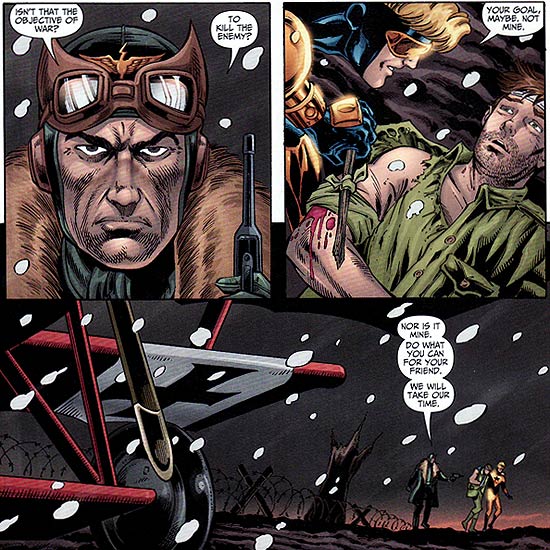 While Enemy Ace may seem an unlikely character to champion on American Veterans Day, Hans von Hammer deserves our attention and respect. Known as the "Hammer of Hell" because of his iron will and ruthless diligence to duty, Enemy Ace served unquestionably in the German Air Force of World War I. Though thoroughly a warrior, von Hammer followed an unyielding code of honor that made him an ideal example of a fighting man, no matter which country's flag you salute.

Enemy Ace made his first appearance in Our Army at War -- the same series that also gave us Sgt. Rock -- in 1965. His stories by the legendary team of Robert Kanigher and Joe Kubert are dark morality tales emphasizing the horrors of war and the courage of the men who fight them. War in the Enemy Ace stories isn't something to be glorified, but something to be survived. Unlike war, the stories themselves are something to be experienced.

Let us give thanks for the war comics that our veterans have inspired. And let us never forget those brave men and women who have committed themselves to serving their country.

(Thanks to Luke of Being Carter Hall for suggesting this idea.)

Luke posted on Nov. 13, 2012 at 5:50 PM
While the idea of pairing up the very serious Hans Van Hammer with the always amusing Booster Gold might seem like an odd couple, the dialogue here is great. I really like Hammer's "Nor is it mine." He was never a bloodthirsty "Kaiser" like a lot of Germans were portrayed in War fiction.

Great spotlight! Thank you for posting it!