Friday afternoon, The Hollywood Reporter broke the news that DC finally plans to release their comprehensive Rebirth continuity in 2020. That's a mere 9 years after they threw out decades of character development in a bid to boost sales.

"We're starting to figure out how continuity works," [DC Comics co-publisher Dan] DiDio said about the process, noting that reboots and complicated retcons are what happens when "things stop making sense."

I'm glad that DiDio, who has overseen DC Comics' output since 2004, has finally realized the value of continuity to the types of stories that his company sells. Better late than never, I guess.

Anyway, I'm sure that what you want to know, as a visitor to a Booster Gold fan site, is "how will this affect Booster Gold?" The answer looks to be: Pretty significantly.

DiDio made the announcement at the "DC Nation" panel of this past weekend's New York Comic Convention accompanied with an illustrated graphic. Bleeding Cool spent most of the weekend pouring over the visible bits of that timeline. I can't make out anything, but Rich Johnston seems to think it restores most of the post-Crisis on Infinite Earths continuity as the third generation of DC heroes.

If that is to be believed, it looks like Booster Gold's history once again includes his joining the original "Bwah-ha-ha" Justice League International alongside Blue Beetle. Also restored: Infinite Crisis and Justice League: Generation Lost. Is there time for 52 to have happened in there somewhere? One can only hope.

Will any of this ever make it to print? Will the short-lived New 52 continuity be abandoned? How can Convergence be shoehorned into this new chronology? Who knows. Maybe we'll find out after Doomsday Clock finally ticks down in December.

Cort posted on Oct. 7, 2019 at 3:41 PM
It was pretty exciting to see how much recognition Booster Gold had on the timeline, especially around G4. With him being noted as recalling the past continuity being canon still too. Heres hoping to a future series with him!

Boosterrific [Official Comment] posted on Oct. 7, 2019 at 5:12 PM
Not having a timeline at the launch of the New 52 was a colossal blunder, and I'm glad DC is finally correcting that mistake. 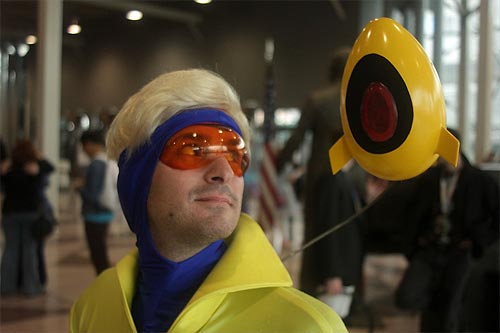 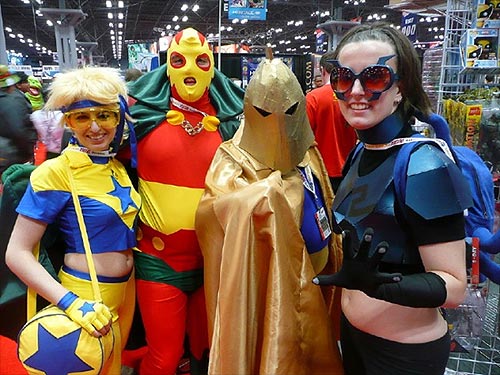 Nothing to See Here

No, DC Comics isn't publishing anything including Booster Gold today. Based on solicitations for October released earlier this week, we won't be seeing Booster Gold at all in October, either. Solicitations tease that there will be "many other heroes and villains from the DC Universe" in Animal Man #13, but that's none to encouraging for those of us already in Booster Gold withdrawal. 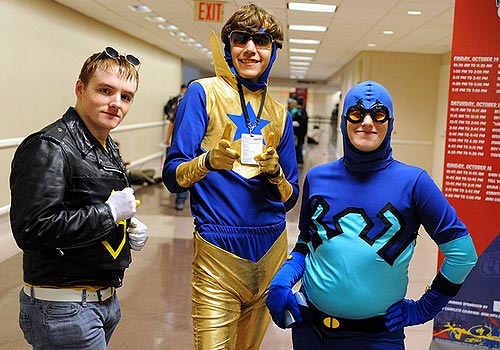 In the meantime, we'll take what we can get. The above photo of Guy Gardner, Booster Gold, and Blue Beetle cosplayers, taken at the 2011 New York Comic Con by Kendall Whitehouse, proves that so long as Booster Gold has fans, we'll be seeing him somewhere. Perhaps even at this week's Comic-Con International 2012, hmm?

However, Vaneta Rogers also covered the panel for Newsarama, and her article implies a starkly different conclusion:

Jurgens said Booster's experiences from Flashpoint seem to be relatively intact, but he said the fact that he has those memories in his head somewhere doesn't necessarily mean he can remember them consciously.

Johns said, "If Booster remembers anything, he's not going to tell anyone."

Jurgens: "No, Skeets does not."

Jurgens: "That's a story still waiting to be told."

(Is it just me, or does Johns' response to Jurgens' announcement that Booster remembers sound like something a super villain would say to a hero who has just discovered his world-ending plot?)

[DC Senior Vice President Bob] Wayne then asked Jurgens on behalf of the online fans about Booster Gold's continuity and whether Booster remembers the timeline from before Flashpoint. "Booster's experiences are still relatively intact," said Jurgens before continuing, "But it's one thing to have those memories, it's another thing entirely to recall those memories."

"Is Rip Hunter coming back?" Johns asked him.

"There are still stories to be told," said Jurgens, before dashing Johns hopes that Skeets would reappear anytime soon.

Funny that three reporters covering the same event would hear three different stories, isn't it? In any event, it seems likely that Booster does remember Flashpoint, even if his lips are currently sealed. This isn't the first time that history has been changed around Skeets (or Booster, for that matter). It is interesting to speculate how Rip Hunter, DC's resident Time Master since the Silver Age, is dealing with the changes to history. Certainly, that's a story I'm looking forward to reading.

Eyz posted on Oct. 17, 2011 at 7:14 PM
It's just more proof how vague this new DC Universe is..
Nothing is decided or canon...until someone explicitly shows it in a book. Say, Ted Kord existance could be completely erased or kept...that is depending who's the first to get to confirm or deny his existence in the pages of a story. Small contradictions are already starting to appear here and there... (Barry Allen mentioning his long time absence due to a "Crisis" while it seems no Crisis ever occured in this DCnU...)