Now DC Is Just Trolling Me

Last week, ComicBook.com got a first look at a couple of variant covers to upcoming Action Comics that tease the outcome of the "The Oz Effect" storyline. 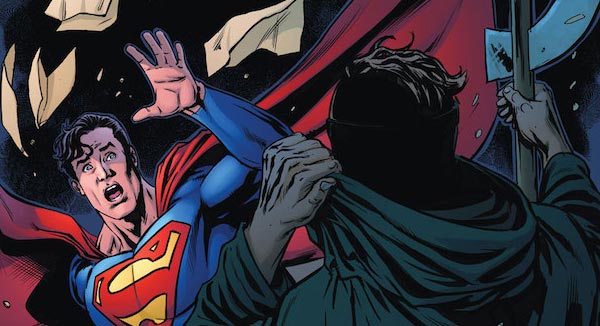 Hmm. The back of that head looks kind of familiar.

Article author Russ Burlingame noted the similarities between Mr. Oz and one of his favorite heroes.

The reader cannot see Oz's face, although from behind he appears to have a headband and exposed hair -- a descriptor that could apply to Ozymandias, Jor-El (in most continuities, including the current version), or numerous other characters, including Booster Gold.

You can read the whole article, including Burlingame's guess at who the hooded man might turn out to be, at ComicBook.com.

Brady Kj posted on Aug. 13, 2017 at 9:28 PM
I think there's too much hair missing on the left side for it to be any kind of headband. I think the person has hair missing, or a Mohawk. It could be Two-Face or Metallo, or a new take on Nuklon.

Whew! Most of you agree that Booster won't be Mr. Oz. What a relief.

The real question here might be if Booster Gold was a prisoner of Mr. Oz, will we be seeing more of him after "The Oz Effect"? At least we can't see him any less.

We'll find out what role — if any — our hero will be playing in Mr. Oz's schemes when "The Oz Effect" goes on sale in Action Comics this September.

DC has released solicitations for books shipping in October. None of them give any hint that we'll be seeing DC's brightest star anytime soon.

But all hope is not lost! This weekend is Comic Con International in San Diego. DC has to be holding something back to tease their fans, right? I'm not saying that Booster Gold will be front and center, but maybe DC will demonstrate that he's not entirely forgotten, either.

Speaking of "front and center," I started the week with a plea that Superman antagonist Mr. Oz not be revealed as Booster Gold in the upcoming "The Oz Effect" story in Action Comics. Many of you had something to say about that. Let's run a quick poll and see what the group consensus is.

This week's poll question: Will Booster Gold play any role in the unveiling of Mr. Oz? Please visit the Boosterrific Polls page to view results for this week's poll.

CDN posted on Jul. 21, 2017 at 5:42 PM
I would want him to be a part of this story, ANY story, so I hold out hope that he's important enough to be a prisoner. But he wont be. DC doesn't give two foofoos about Booster :C

bob posted on Jul. 21, 2017 at 11:20 PM
in the picture in batman dark days: the forge i thought that booster gold might be standing there. because none of the characters except plastic man have been confirmed yet, it was one of the people standing on the boat that is booster. mom says that its not booster what do you think?

Pay No Attention to the Man Behind the Curtain

Pop culture website 13thdimension.com posted an "exclusive first look" at upcoming issues of Action Comics this weekend. Running throughout the title in September and October will be a five-part story by Dan Jurgens called "The Oz Effect," in which we will finally discover the true identity of Mr. Oz.

Reading the advance solicitations included in the article, all I could think was "please don't let Mr. Oz be Booster Gold."

The popular theory is that the mysterious Mr. Oz, introduced three years ago (!) in Superman #32, is Ozymandias from Watchmen. Personally, I think that seems a little too "on the nose" to make a very satisfying reveal after all this time. And even if the fans were right and it was supposed to be Ozymandias, I would expect DC to change Mr. Oz's secret identity mid-story to maintain the surprise. (Anyone out there still remember the last minute Captain Atom/Hawk swap in Armageddon 2001?)

Many of the things Mr. Oz has done and said over the past three years indicates a fixation on Superman. Therefore, I assume that Mr. Oz is someone aware of Superman's past in Smallville, Kansas. (I think Mr. Oz takes his name from the original manipulative "man behind the curtain," the Wizard of Oz, who also has ties to Kansas.) While those clues might point to familiar Superman foes like Conduit or Ruin, I begin to worry that it might be a time traveler with historical ties to the Man of Steel.

Which is fine, just so long as it's not Booster Gold.

I mean, if Mr. Oz is revealed to be a nearly omnipotent time traveler seeking to unify a fractured universe (post-"Crisis", "Flashpoint", "New 52", "Rebirth", "Watchmen," etc.), it would certainly explain why fan-favorite Booster Gold has been M.I.A. since Convergence. And we can't deny that Booster has beef with Superman that goes way back. And Dan Jurgens does like to recycle his favorite characters . . . .

As I said, I don't want this to be the case. I don't want Booster to be a "villain." (And I certainly don't want to have to add all 30+ appearances of Mr. Oz to the Boosterrific database after the fact.) But it could be worse. After three years of waiting to find out who Mr. Oz really is, it might turn out that he's the Black Beetle.

mina posted on Jul. 17, 2017 at 12:42 PM
I've been calling Mr. Oz as O(z)sterman/Dr Manhattan and as Booster Gold since the beginning of all this Rebirth nonsense. Because his final appearance as "Waverider" reminded me so much of Dr Manhattan, that when all the Watchman "hints" were dropped, I jumped to that conclusion almost immediately, and "Dr Oz" as Ozymadias is way too easy.

(though, can I just say, I stopped reading Rebirth... ages ago. So i don't even know what they've revealed of Oz so far.)

Pyynk posted on Jul. 17, 2017 at 4:38 PM
Having already lost Max, I'd really hate to lose Booster as well. I'm fairly sure Jurgens is to fond of Booster to throw him away and make him into a villain, but who knows?

Jenn posted on Jul. 18, 2017 at 9:49 AM
I don't think Oz is Booster. That would completely go against what Rebirth is all about. DC is trying to celebrate its rich history and heroes. I believe turning a beloved character into a supervillain is the total opposite of this. Oz has to be a villain or an anti-hero at best. Personally, I still think it's Superboy Prime, and Booster is more likely to be one of Oz's prisoners than Oz himself.