Reconsidering a Crisis in Progress

We're less than a week away from Heroes in Crisis #6 of 9, which means we're pretty close to learning the truth behind who killed everyone at Sanctuary. It seems like a good time to talk about Booster Gold's mental health.

Clearly, Booster has been mentally struggling with fallout from his incredibly stupid actions in Batman #45. I had complained at the time that Booster's reaction to Green Lantern's graphic on-panel suicide was inappropriate — and it was — but I'm willing to concede that Tom King was trying to make a point in his own way about how the human brain reacts unpredictably to such trauma.

And how is Booster Gold reacting to that trauma? His symptoms as exhibited in Heroes in Crisis look like an aggravated case of Post Traumatic Stress Disorder, which is exactly what press reports advertised King wanted to address in this series. PTSD is triggered by extreme trauma with common symptom including avoidance of repeat stimuli, willful memory loss, and hallucinations. Booster has spent most of the series hiding from just about everyone, so check one. And he claimed he couldn't remember exactly what happened, so check two. But hallucinations? Maybe those too.

As Frankie Hagan pointed out in blog comments last month, so far in Heroes in Crisis, no one seems to have noticed Blue Beetle other than Booster Gold, which certainly suggests that the Blue and Gold reunion may be all in Booster's head. I don't know what that says about Booster Gold, but if it turns out to be true, it may be even more disappointing for Booster Gold fans than if our hero turns out to be a mass murderer. 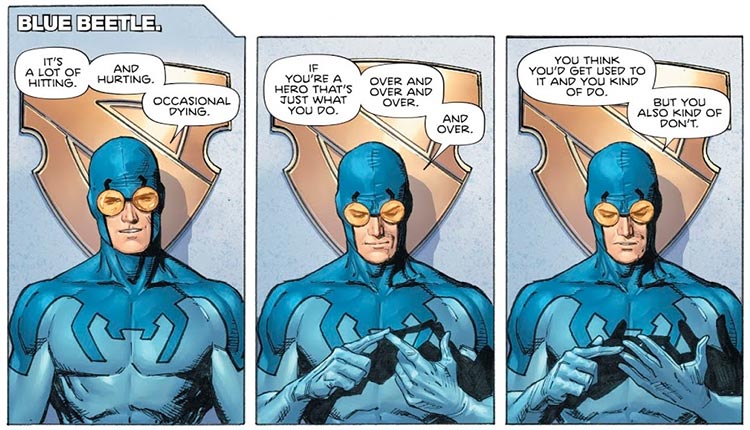 Speaking of murder, that's the real question, isn't it? Is Booster's mental illness severe enough to drive him to kill? Statistical evidence indicates that there are indeed links between PTSD and increased rates of outbursts of anger and violence. However, the odds that PTSD would unbalance a hero enough to engage in a spree killing remain remote.

Experts say that the biggest indicator of how an individual may respond to PTSD is that person's pre-trauma personality. It's true that Booster Gold has always had his own set of foibles, yet he has never killed anyone, even when given the opportunity. At heart, he's no murderer, no matter what Tom King wants to imply.

We'll find out more about Booster Gold's health when Heroes in Crisis #6 is released February 27.

Jonny posted on Feb. 22, 2019 at 11:56 AM
Yeah...if that's true, it's the last straw for me. Especially because Ted is ALIVE in the Rebirth continuity. There is no reason he should be a figment of Booster's imagination. And I don't see Booster being the one to kill. That would tarnish our poor hero even more. I don't think King would do that to Booster.

I honestly enjoy a lot of Tom King's writing, but can admit its all pretty one note, dealing with trauma and mental illness. I just wish this series ends with a light at the end of the tunnel...and hopefully something comes out to undo all this senseless killing.

But hey, at least the art has been good.

Cort posted on Feb. 22, 2019 at 4:13 PM
I hope they dont make him the killer. That'd be a pretty low blow. Booster hallucinating Ted though is heartbreaking. I wouldn't be miffed, it actually makes sense he would fall back to a comfort zone. But sad nonetheless. And yes, while Ted was alive in BB rebirth series but continuity has been touch and go back and forth to Pre Flashpoint and not. Especially in Kings stuff. His Batman ans Catwoman even play with it on when they first met. And the second variant cover did show Wondy snapping Lords neck. So anythings possible.

Patrick posted on Feb. 23, 2019 at 8:43 PM
I would love if DC would do a fun Booster Gold series. Something like Nick Spencer's Ant Man run would be so great.

Eskana posted on Feb. 24, 2019 at 12:31 PM
I've wondered for a while if Ted was a hallucination.... yes, due to the PTSD angle, but on top of that, who knows how much Booster remembers from pre-Flashpoint? If he remembers all of it, then he'd know his best friend died and how he couldn't save him on top of everything else, and even though Ted's alive now in this new continuity, maybe they're not as good friends (even if they are, it's gotta be awkward knowing what happened in Booster Gold 1-12.) As far as I know, we've never seen them interact.

So, it would just be heartbreaking if it turned out that Booster was imagining the version of his best friend that he knew best, the one who died. And you're right, that would be sadder than finding out he's a killer. I don't think he killed anyone, but I know if they did that, he'd never be able to go back to his usual show-boating self.

When Loving Yourself Is Wrong

PSYCHOTHERAPY ASSESSMENT: Michael suffers from generalized anxiety, the "poser" syndrome, mainly because he is…just that. He has little respect for the law or the rights of others and believes that he is entitled to act because the end justifies the means. Yet he still has compassion for others and seeks to redeem himself, primarily through shortcuts that often fail. Michael needs to work on his morality, respecting the rights of others and accepting his limitations. Like most narcissists, he operates on double standards and is truly afraid of genuine intimacy.

I'm no expert on psychology like Mr. Elliott, so I had to look up the last bit of his assessment notes. As defined by the American Psychiatric Association's Diagnostic and Statistical Manual of Mental Disorders, "Axis I" is the classification for almost all psychological diagnostic categories of mental disorders. "ICD" is shorthand for the World Health Organization's International Classification of Diseases system, in which "F411" identifies "Generalized anxiety disorder (GAD)."

According to the National Institute of Mental Health website:

"People with generalized anxiety disorder (GAD) display excessive anxiety or worry, most days for at least 6 months, about a number of things such as personal health, work, social interactions, and everyday routine life circumstances. The fear and anxiety can cause significant problems in areas of their life, such as social interactions, school, and work."

Symptoms for at least six months? Wow. Tom King has really f'd up our hero.

Booster Gold has certainly always exhibited sociopathic and narcissistic traits — that's what we love best about him! — but in recent years he had matured beyond his early days as a "poser." I guess DC's "Rebirth" is about taking everyone back to their roots, but I sure hope that doesn't mean we're going to have to rehash Millennium again. Or Extreme Justice.

You can read Elliott's diagnosis of other heroes, including how damaged Superman really is, in DC Nation #4 for free on Comixology.com. And, of course, you can find Heroes in Crisis #1 for sale in your Local Comic Shop on September 26.

Boosterrific [Official Comment] posted on Sep. 7, 2018 at 4:44 PM
Counterpoint to these diagnoses at
BleedingCool.com
.