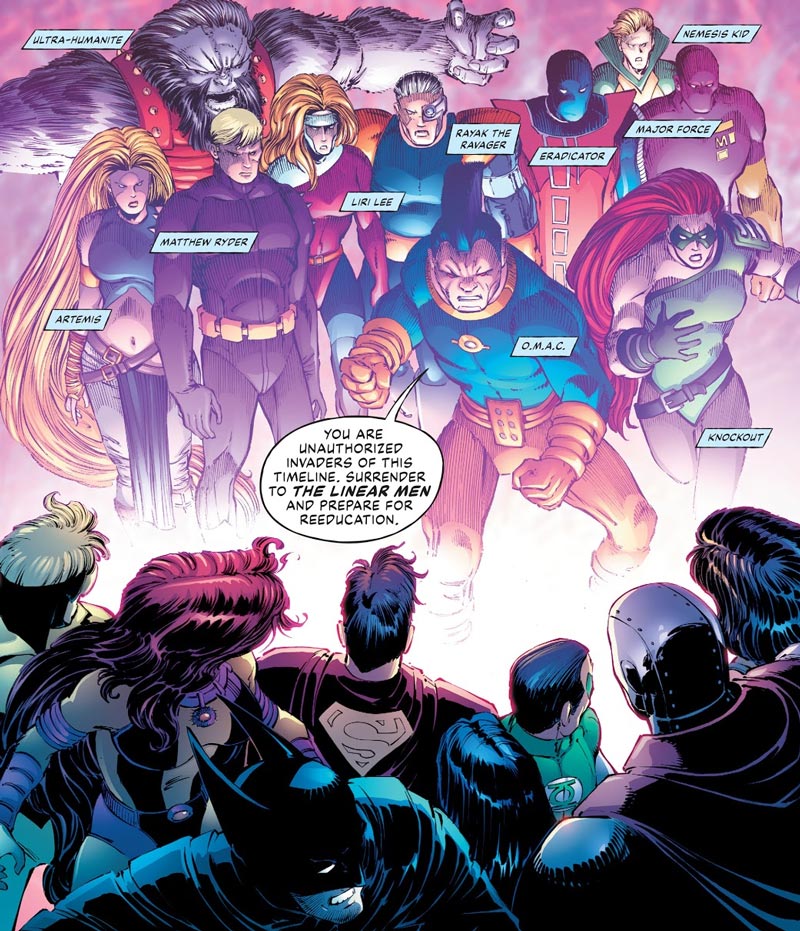 If you've been reading DC Comics for a long of time, you may recognize most of those people, but Booster boosters in particular should probably have a pretty good idea who the Linear Men are. This is an unusual line-up of that team. It's no coincidence that many of them directly pair up with a Multiversal heroic counterpart, a contrivance that is explained in the story as the nearly omnipotent Dominus bends reality to his will.

But even accepting that, one of those Linear Men stands out. Can you spot which one? 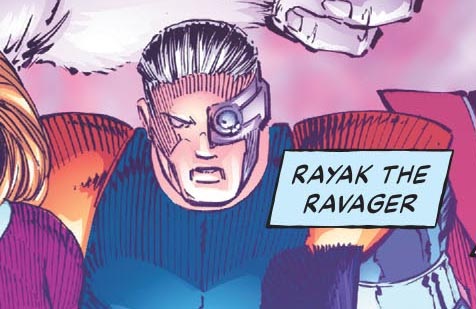 Hint: It's this guy.

Whoever that guy is, I doubt anyone calls him "Rayak the Ravager."

Quick history lesson: The Linear Men concept was created in Adventures of Superman #476 (by Dan Jurgens) in 1991 with the introduction of The (singular) Linear Man.[1] That Linear Man died, sacrificing himself in the 30th-century to "correct" the history he'd unintentionally broken while trying to bring justice to Booster Gold. (You'll find more information on the interactions between the Linear Man and Booster Gold here.)

Shortly thereafter, in Superman #59 (by Dan Jurgens), we learn that the Linear Man was a rogue member of the mysterious Linear Men of Vanishing Point who are "dedicated to guarding the linear sanctity of the time stream." By the time of Superman #73 (by Dan Jurgens), it is well established that there are three remaining Linear Men: Matthew Ryder, Liri Lee, and Hunter.[2] (The impetuous Waverider is often an ally of the group but isn't really a member.[3])

In our group shot at the top of the post, both Liri Lee[4] and Matthew Ryder are clearly identified by name in our Generations: Shattered confrontation. Naturally, the third Linear Man should be Hunter, especially since he appears earlier in the issue beside both Liri and Ryder. 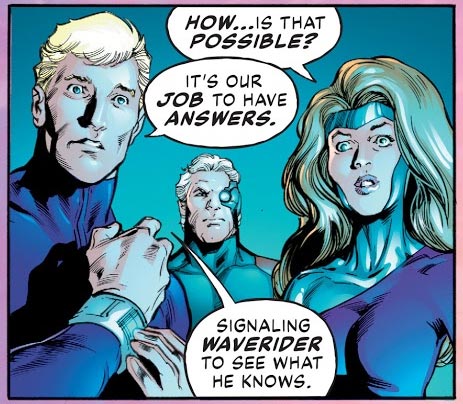 So why in the big team shot is Hunter misidentified as "Rayak the Ravager"?

If I had to take a guess, I'd say that whoever wrote the label was trying to recall the name "Ryak the Rogue" from memory. Ryak is the newest Linear Man — the first not created by Dan Jurgens. Ryak makes his first appearance in The All-New Atom #7 (by Gail Simone) in 2007, and he looks nothing like Hunter. For one thing, he's green. 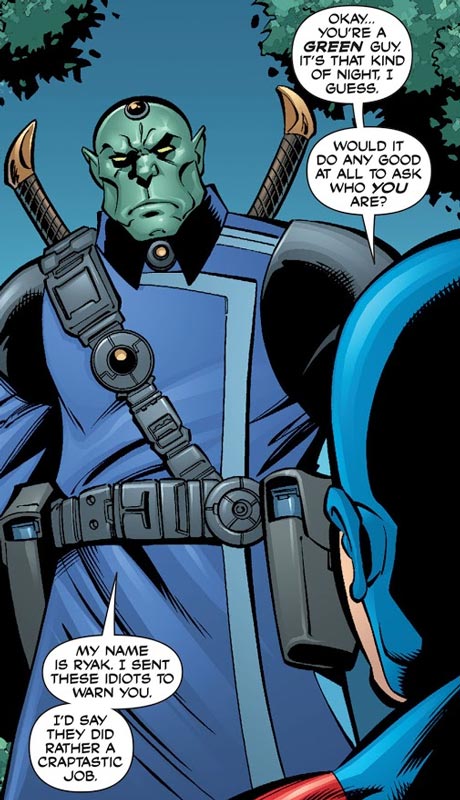 As his moniker might suggest, Ryak was a solo actor in Atom, but he made a cameo appearance beside the other Linear Men on Vanishing Point in Dark Nights: Death Metal: Rise of the New God in 2020. Look closely at that panel, and alongside Ryak you'll spot Ryder, Liri, Rip Hunter, and Waverider, but Hunter is missing, replaced by none other than the original Linear Man himself![5]

As you can see, keeping the Linear Men straight takes as much work as the convoluted continuity they are sworn to protect. The DC Multiverse is a big place. Every once in a while, we should probably expect the writers, artists, or editors to confused a name and a face.

On the other hand, the events of both Dark Knights: Death Metal and Generations: Shattered involve realities and timelines altered by gods themselves. In which case, if Dominus wants to call Hunter "Rayak," who are we, mere mortal readers of comic books, to correct him?

1 As for the original Linear Man's real identity: it is commonly assumed to be Travis O'Connell. That name comes from the "Linear Men" entry in the Who's Who in the DC Universe Update 1993 #2 (by Roger Stern) which identifies four Linear Men by name and states that "[Travis] O'Connell eventually sacrificed his own life in the late 30th Century." Unless there were multiple Linear Mans chasing Booster Gold in the 30th century, I think we've solved that mystery. (DK apparently agrees; they identify O'Connell by name in their entry for the Linear Man in their officially-licensed The DC Comics Encyclopedia.)

2 Hunter is, as you might have guessed, Rip Hunter. But he's not the one we know. According to the story "Falling in Line" in Legends of the DC Universe 80-Page Giant #1 (by Dan Jurgens), Hunter is the evolution of the young, mischievous Rip Hunter from an alternate history that appears to closely mirror the original Rip Hunter, Time Master, whose pre-Crisis on Infinite Earths Earth-1 adventures were chronicled in a book of the same title.

3 Technically, Waverider, like Rip Hunter, is two Linear Men. See, Waverider and Matthew Ryder are the same person, separated into two timelines by the accidental death of his/their parents. In violation of the Linear Men's prime directive, Waverider himself changed the history that forced the divergence that allowed his alternate self to grow into his role as the Linear Men's Ryder. (For details, see Superman #61 by Dan Jurgens.) And while we're on the subject, I might as well mention that Matthew Ryder and Waverider first appeared in Armaggeddon 2001 #1 by Archie Goodwin... and Dan Jurgens.

4 Liri Lee is the only female member of the Linear Men. I probably don't need to tell you, but she was created by Dan Jurgens for Superman #59. She takes the name Linear Woman in Time Masters: Vanishing Point #6 (by... oh, you know). That may take place in a different reality or at a different point in Liri Lee's future chronology than the events of Generations: Shattered. The biggest problem with hanging out at Vanishing Point is that time and space don't have meaning anymore.

5 This isn't the first time O'Connell has been seen since his "death" in Adventures of Superman #478 (by Dan Jurgens), and there are many well-intentioned websites that appear to confuse O'Connell and Hunter, which is understandable. (Heck, I did it myself when I first listed my annotations for the issue, and I obviously know better.) Both O'Connell and Hunter share a 1990s affinity for shoulder pads, pointless belts, and cybernetic parts. And, of course, they are both Dan Jurgens creations. Rule of thumb: if he has black hair and a holster, it's O'Connell; white hair, Hunter.

Xylob posted on Jan. 30, 2021 at 8:36 AM
This is the kind of in-depth and detailed analysis I love!
Excellent article in every regard.
Gawd JR jr's "art" is horrible.... immediately recognizable as his, but most definitely not in a good way.

Bob posted on Jan. 30, 2021 at 9:21 PM
My theory about the linear lady thing is that the different point in time for Lari Lee at least is After Generations Forged and Generations Shattered. That is why they were imprisoned by Rip Hunter in the first place. I was expecting them to turn heel a long time ago.