Justice League Action debuted on Cartoon Network on Friday in a four-part "Shazam Slam" special. Unexpectedly, Booster Gold got in on the action! 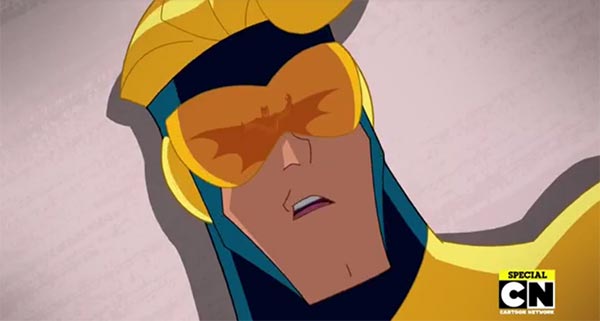 Booster played a small role in episode 3, "Night of the Bat," where he is used exclusively as comic relief. (There's even a quick "Gold's Gym" visual pun.) Diedrich Bader's portrayal of Booster sounds a little more Californian than Boosters past. It's very in keeping with Booster's public image as an idiot.

Although Booster doesn't have much to do in this episode, JLA writer Jonathan Callan called the character "a breakout star" on Twitter.com. Booster voice actor Diedrich Bader responded by saying how much he loves playing the character.

Hopefully, this love fest will translate into bigger roles for Booster in future episodes. We'll be watching.

(Special thanks to Bob in Friday's comments for catching Booster's appearance.)