Booster Gold Versus The Doom Patrol

Today's graph compresses the timeline of yesterday's graph to compare apples to apples: issue by issue of Comicchron.com sales numbers for recently canceled DC titles. The trend becomes pretty obvious here as ballooning early enthusiasm quickly deflates to a sloping plateau before finally petering out altogether. Note the recurring late series crossover spikes as Blue Beetle #20 is a Sinestro Corps crossover and both Manhunter #13 and 26 got boosts from Infinite Crisis-related stories. I wonder how big those spikes would have been if little plastic rings had been involved?

DC's sales cancellation threshold, while dependent on editorial discretion, is approximately 15,000 units. That's the white line in the graph above. Unless "Blackest Night" or the arrival of Keith Giffen can earn Booster Gold some new regular readers, it looks like the series will be targeted for termination by issue 50. I find that unacceptable. So spread the word, Boosterphiles, and lets see if we can't get some more air under Booster's sails.

KMD posted on Feb. 7, 2010 at 3:26 PM
Hopefully JL: Generation Lost can increase sales. We'll see. I am not optimistic though things could change if the "Blue Beetle" co feature is pulled and the price per issue goes back down.

Harry posted on Feb. 8, 2010 at 5:42 PM
Booster will need continual event press to keep sales above the kill line. Its the nature of being a lesser known property. A big name on the new creative team, a featured spot in the bi-weekly series, the return of Ted Kord all seem to be DC's attempt to keep this title alive. That bodes well. Still, as big of a fan as I am, a 50 issue run just may be all the milage there is. Any idea how the collected editions are doing?

Boosterrific [Official Comment] posted on Feb. 9, 2010 at 12:09 AM
KMD: One of the things I discovered in the stats is that the price change did not appear to in any way significantly affect the rate of decline of sales. While I hear that the Beetle co-feature is being canceled, I don't expect that if the price does fall back to $2.99, the change alone will make much of a change in the sales figures.

Harry: The TPB sales, like the individual comic book issues, are sliding, at least so far as direct sales reports are concerned. It is hard to get a grasp on the trade numbers, as distributors don't report sales numbers, and comichron.com only tracks the top 300 sellers each month. For example, Booster's softcover trades have sold approx 1700, 1500, and 1400, each in their opening month of sales.

Harry posted on Feb. 9, 2010 at 11:20 PM
Those TPB sales are better than I expected. If they can sell close to 1500 each TPB edition I think that encourages DC to work to keep the title in circulation. However, it looks like the Jan sales numbers are back to about 20,000. Will we get new graphs Boosterrific? I LOVE graphs!

Boosterrific [Official Comment] posted on Feb. 10, 2010 at 2:21 AM
Harry, I'll definitely be revisiting this topic, and you can be assured that I'll be bringing the graphs.

Harry posted on Feb. 11, 2010 at 11:19 PM
Ditto the appreciation. I never knew I needed a comprehensive collection of all things Booster Gold... but here I am.

Booster Gold Versus The Losers 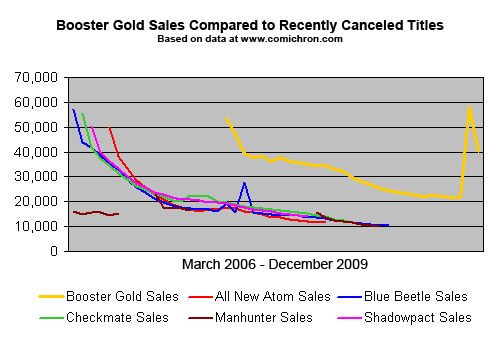 I certainly hope that Booster Gold never gets canceled (again). But curiosity got the better of me, and I compared the sales numbers for Booster Gold against some recent DC titles that got the axe for poor sales. It's pretty easy to spot a recurring trend in Comicchron.com's statistics. Here's hoping Booster Gold's recent sales spike is more than just outlier data.

Booster Gold Versus The 300

Booster Gold Versus The Leader

Comparing monthly sales of Booster Gold Volume 2 to the top monthly seller, it would seem that the series isn't really doing too badly, all things considered. While monthly sales of the "flavor-of-the-month" book vary wildly from month to month, Booster Gold's audience looks comparatively stable despite its naturally shrinking audience. Comicchron.com statistics indicate that industry per unit sales have been declining steadily in recent years (down about 14% since 2006 even as industry revenue is increasing from increased per unit pricing), so some decline in unit sales must be expected beyond those associated with a diminishing audience over time.

Booster Gold Versus The Calculator

According to Comichron.com, Booster Gold Volume 2 debuted with sales of 53,685. That's a pretty respectable number, and it's pretty much in line with the expected sales for a first issue from DC. It's pretty much been the usual slow but steady decline since.

However, that benchmark was topped recently by interest in the "Blackest Night" crossover. As previously mentioned, Booster Gold #26 was part of the "Blackest Night" ring promotion, and retailers were encouraged to increase their orders dramatically to "earn" the option to buy plastic rings for their customers. (I don't mean to sound too disrespectful here. This is a pretty clear indication, if we needed one, that crossover tie-ins to mega events can drive sales. And while I personally don't care for Blackest Night, I certainly do want a Legion of Super-Heroes ring. ) This promotion created a sales aberration in Booster Gold's favor.

The question now is whether that increased exposure will provide any long-term sales boost to the series. We'll take a look at that with a few more graphs later this week.