Paradise by the Karaoke Mic

When I was lost, you took my hand
When life was gray, you made it grand
When I was damned, you knew the deal
When my heard was sand, you made it steel

I'll call you babe, and you call me boo
I'll love you strong, and you love me true!
Until the end of the world, I love you!

Don't be surprised if you don't recognize the song. It's not real. It was created by issue writer Sam Humphries specifically for the occasion ("to pass legal"). But he didn't create it without inspiration.

According Humphries himself (@samhumphries on Twitter.com), the song was inspired by "For Crying Out Loud," written by Jim Steinman and performed by Meat Loaf on his 1977 epic operatic album, Bat Out of Hell.

I've always thought of Booster as more of a U2 fan, but who am I to tell a Justice Leaguer what to sing.

Kevin Munson posted on Feb. 10, 2020 at 8:55 AM
It amazes me how popular Harley is. I went to my local comic book store on Sunday and they were sold out of Harley #70. I still made the best of it and caught up on a few other issues I have missed like Millenium 1 & 2 and DCeased #1

Boosterrific [Official Comment] posted on Feb. 10, 2020 at 2:50 PM
Booster will be in issues 71 and 72 as well, so you might want to warn you Local Comic Shop that you'll be back for those soon. (Or you could wait to get all three at once when the inevitable trade comes out in a few months.)

Booster Gold has been popping up in Harley Quinn stories a lot lately, and I'll let you in on a little secret: I don't understand them. Harley Quinn stories, that is. They all have at least two series of ongoing events, one clearly presented as a fantasy tale and the other as... reality? However, it's often a reality that doesn't quite square with the rest of what's happening in the DCnU or any of the dozen other Harley Quinn appearances each month.

Even in its 70s, Harley's ongoing series continues to sell 5-10 thousand more units than what Booster Gold was moving near the end of his last self-titled series, which is to say that her title has some loyal month-to-month readers. I assume they enjoy the lack of concrete reality in her stories. I've got nothing against them or series' writer Sam Humphries, but you can guess that someone whose hobby is cataloging the minutiae of a fictional super hero's continuity might find such ambiguity unsatisfying. That unsatisfied person is me.

All of which is a long way of saying that I was planning on buying today's Harley Quinn #70 in the hopes that when I pick up next month's Booster Gold appearance, I might have some hope of figuring out what is happening. I say "was" because I've just learned from Booster booster Logan Peterson that Booster is in issue #70, too!

A preview of the issue (which gives no hint of Booster Gold — not that I doubt you, Logan!) is online at CBR.com. Buy it and make Skeets happy.

An April Full of Fools

I hope you enjoy Booster Gold's team-up with DC's omnipresent femme fatale, Harley Quinn, in March's previously-solicited Harley Quinn #71, because the team-up will be continuing this April.

Per the issue solicitation at Newsarama.com:

HARLEY QUINN #71
written by SAM HUMPHRIES
art by SAMI BASRI
cover by GUILLEM MARCH
Some mysteries just don’t want to be solved! As Harley digs deeper into the death of her friend, it becomes clear that there are forces in Los Angeles that don’t want her this close to the truth. Will Harley be broken by the City of Angels, or will she be able to avenge her friend’s death? And will she be able to convince Booster Gold that he is not her crime-fighting partner and never will be?
ON SALE April 1, 2020 · $3.99 US

That soliciation text.... I'm choosing to believe that it's a joke, and that Booster doesn't really want to be the sidekick of the nutcase who tried to kill him in the pages of Heroes in Crisis.

I guess we'll find out the truth this April Fools Day.

Why Don't They Just Get Married Already

A "fictionalized" Booster Gold showed up at the end of Harley Quinn #66 in part to satisfy the title's obligatory "Year of the Villain" crossover event.

The next month, in Harley Quinn #67, faux Booster returned as justification for a trip through the DC Universe's never-ending series of "Crisis" events. (Was this the same "fictionalized" Booster seen in the previous issue, or a different interpretation? It's impossible to tell, so assume whatever you like.)

Finally, this March, it looks like the "real" Harley and Booster will finally cross paths for the first time since Heroes in Crisis.

Per the issue solicitation at Newsarama.com: 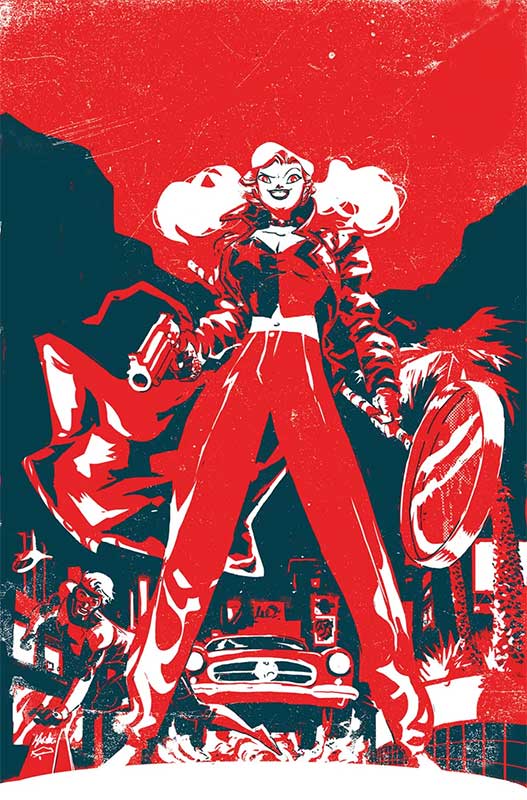 HARLEY QUINN #71
written by SAM HUMPHRIES
art by SAMI BASRI
cover by RILEY ROSSMO
Harley thought a little trip to Los Angeles would help her cope with grief, but grief followed her all the way to the West Coast. When a new friend of hers dies, she knows in her heart there is foul play at work. She’ll have to put down her mallet and pick up a magnifying glass to prove her friend was murdered. And will Booster Gold help her investigation or only hinder it?
ON SALE March 4, 2020 · $3.99 US

Attention DC: you had me at Skeets on the cover.

Thanks to Rob Snow for alerting me to this coming event.

I just enjoy he's being used in any capacity post HiC.