More often than not, making a comic book is a team effort. Many artists and editors are generally involved in the process. As a result, what any one artist puts into their work doesn't necessarily make it to publication. Such was the case with 2008's Justice League Unlimited #43.

The issue's story, "Wannabes," was written by Keith Giffen and penciled by Christopher Jones. All Booster Gold fans know who Giffen is, and Jones will be familiar to fans of DC's Cartoon Network-inspired Unlimited Universe comics. Recently, Jones posted his pencils of the last page on his website, gallery.christopherjonesart.com, and the difference between the final product and his rendering is rather remarkable. 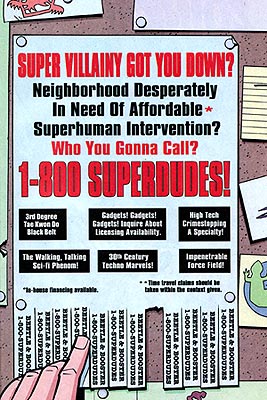 The penciled page has considerably more detail on the bulletins around the edges of the panel and a far more engaging design of the main flyer itself, including hand-written tear-off tabs! Though the essence of the panels remains the same, the change to the fonts and layouts make for a less whimsical finish that deprives the page of most of its humor.

In addition to changes on this page, Jones' hand-lettered sound effects throughout the issue have been replaced in the published edition. Why were these changes made? Why would an artist bother to do so much extra lettering if it wasn't to be published? To answer this question, I asked Jones himself:

As I indicated on my blog, I turned in the pencils for this story and then the whole thing was put on hold for a couple of years. Other than hearing that the story was finally being printed, I never got any more information on any behind-the-scenes details on the inking, lettering or the rest of the production.

I like to letter sound effects, logos and things on pages myself, but one thing that can often happen is that the inker won't touch it figuring that it's the purview of the letterer, and then the letterer never sees what I'd indicated with the pencils.

Jones has posted his pencils to the entire story, including a larger version of this page and two other full pages that were part of the original 22-page commission in 2004 but cut from the 20-page final printing in 2008, in his gallery here. If you would like to read more about the behind-the-scenes trials and tribulations of creating comic books, be sure to stop by Jones' blog, blog.christopherjonesart.com, where Jones is very open about sharing his work -- lately on the comic book adventures of Cartoon Network's Young Justice (which is pretty good save for the glaring omission of Booster Gold).

Thanks to Christopher Jones for being so gracious in responding to questions. Also thanks to site-contributor Morgenstern, for calling attention to Jones' penciled artwork.