The now familiar Chris Batista art of Blue Beetle and Booster Gold running away from an angry mob (as seen in Booster Gold #34) will soon be available as a pair of vinyl decals from Elephant Gun.

Just like the Dynomighty wallet that used the same art, the stickers are a Previews Exclusive available only to comic shops. They'll be available this October with a $6.00 suggested retail price. Remember, if you want it, you'll need to remind your Local Comic Shop to order it!

Remember back in February when we learned about Dan Jurgens' least favorite Booster Gold drawing ever? Now it's available on a wallet!

Though you can have your pick of DC Comics-themed styles of Mighty Wallets on Dynomighty.com, if you want Blue and Gold (as drawn by Chris Batista for Booster Gold, Volume 2, #34), you'll have to order it through your Local Comic Shop. This sucker is a Previews Exclusive. From the item description on previewsworld.com:

The outside of the wallet features images & logos of heroes Booster Gold and Blue Beetle, while the inside features classic artwork from the pages of DC Comics! Made of 100% eco-friendly recyclable, tear-resistant, and water-resistant material. Includes 2 large pockets for cash and receipts, 2 credit card pockets that expand to hold lots of cards, and 2 quick access business card pockets.

(I know this is nit-picky, but that's the Infinite Crisis era Jaime Reyes "Blue Beetle" logo. I hope this is just mock-up art, and the actual wallet has the Crisis on Infinite Earths era Ted Kord "Blue Beetle" logo as seen on Convergence Blue Beetle. I always insist on period accuracy when it comes to the decoration on my wallets.)

The wallet ships in late May, but you'll want to get your order in now!

A few days ago, Booster Gold creator Dan Jurgens made a pretty strong statement on Twitter. 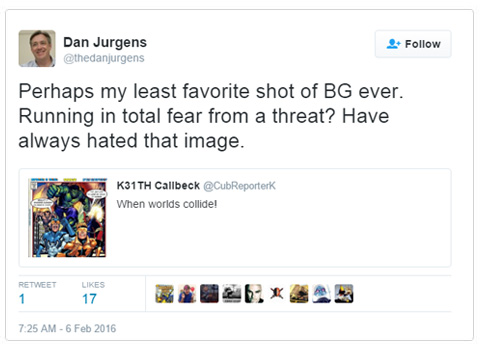 The inspiration for Jurgens' comment was Booster booster Keith Callbeck's post of Ross Pearsall's Super-Team Family mash-up cover of Booster Gold and Blue Beetle running from the Hulk. Pearsall's inspiration was the opening splash page of Booster Gold, Volume 2, #34, drawn by Chris Batista in 2010. Specifically, it is this panel by Batista that Jurgens takes issue with: 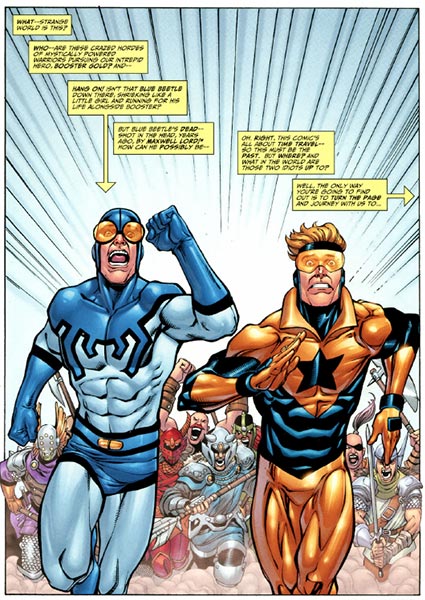 It's easy to understand Jurgens' dissatisfaction with Batista's choice of poses and expressions. That panel has gained some traction on the Internet in recent years. You may have seen it copied by Blue and Gold cosplayers. Howard Porter's 2015 cover for Justice League 3000 #12 saw a similar scene of the panicked pair.

That wasn't always their reaction to trouble. In their Justice League International heyday, Beetle and Booster were chased by mobs of angry citizens, vampires, middle-eastern dictators, runaway islands, demons, and countless super villains. Yet Kevin Maguire, the artist most associated with the Blue and Gold pairing, never showed Blue and Gold turning tail in fear.

So what's the right way to depict Blue Beetle and Booster Gold running for their lives? Here's Dan Jurgens' take on the scenario in Booster Gold, Volume 2, #7 (2008): 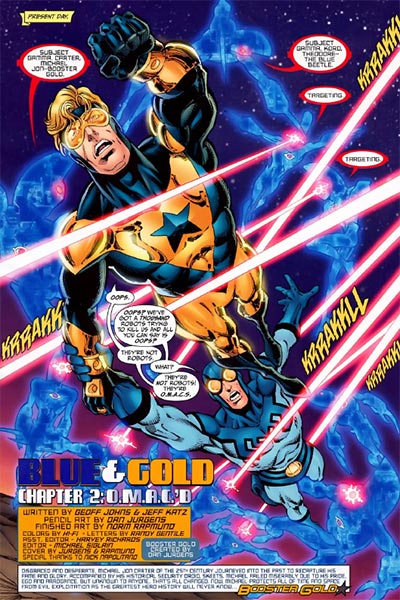 Ok, so maybe Beetle is still scared. But look at Booster. What a hero!

Morgenstern posted on Feb. 11, 2016 at 3:21 PM
I can understand where he is coming from. Often it feels that Booster is written...differently like I see him. To me this seems to come from that to most Booster is seen as a "funny character", so Authors write him as a coward or lecherous, not because those things fit him, but because they consider these things as funny.

Jake Speed posted on Feb. 11, 2016 at 7:46 PM
Agreed. I always thought that any humor around Booster as a character was when he was NOT engaged in super-heroics, out of the suit. You know, when he was a regular guy. Maybe laughing in the face of danger sometimes. I think "I Can't Believe It's Not the Justice League" even though I really enjoyed it, somehow sullied the perception of Booster.

Big week this week as Booster Gold #43 and Justice League: Generation Lost #23 are scheduled to hit stands today. This is the penultimate issue of Generation Lost. After the big reveal in last week's Brightest Day #23, what could be in store for the JLI as they head into "the most awesome fight in comic book history"?

But that's not all! Also due out today is the latest Booster Gold collection, Past Imperfect. This issue collects the first six issues by the creative team of Giffen/DeMatteis/Batista/Perotta. That's pretty good timing, seeing that today's Booster Gold #43 is the last issue created by the Giffen/DeMatteis/Batista/Perotta creative team. (Booster Gold-creator Dan Jurgens makes his return next issue!)

Buy all of them and make Skeets happy.

RussBurlingame posted on Apr. 16, 2011 at 10:34 PM
Didn't the TIME MASTERS: VANISHING POINT collection come out this week also? Huge week to be a Booster fan.

Boosterrific [Official Comment] posted on Apr. 17, 2011 at 2:08 PM
Actually, TM:VP TPB came out last week (as covered here: http://www.boosterrific.com/news.php?id=321&New-Release%3A-Time-Masters-TPB). But it's always a huge week to be a Booster fan!

RussBurlingame posted on Apr. 17, 2011 at 9:24 PM
I keep forgetting that if I order on Amazon to get the savings, the books come a week late. Grumblegrumble.

Yesterday DC released a preview of Booster Gold #42 in the Source, and it's interesting to compare the solicitation cover art with the finished work.

Both images were drawn by Chris Batista and presumably inked by Rich Perotta. The solicitation image on the left was probably colored by a DC staffer; the final image on the right was colored by Hi-Fi Designs. What a difference a bit of computer color makes.

Eyz posted on Mar. 8, 2011 at 2:18 PM
Love the final product... but for some reason I gotta admit, I kinda also dig the simpler coloring on the left.
Reminds me of simpler times (and comics) and how most Euro-comics look (colorists tend to avoid shading and gradients over here)
It looks kinda "classic".

(but the atmosphere is amazing on the right)


ncllcn posted on Mar. 8, 2011 at 2:52 PM
Not the biggest fan of hi-fi but as a Booster Gold fan I'm stuck with them. However, this cover is good. Looks like the Perforated Man upgraded his regular shank on the left to some kind of energy/plasma shank on the right, Booster better be careful! I bet they do the same color change to the cover of issue #44, Jurgens' return.

Jesse posted on Mar. 8, 2011 at 10:15 PM
Booster and the Perforated Man look good but the rest of the cover looks horrible with the computer colors. Comics in general need to go back to simple or we're going to wind up with ugly chromium covers or worse.

Eyz posted on Mar. 9, 2011 at 4:52 AM
Are you talking about the 90s? XD
And all those ol' platinum/shiny/relief/3D/chrome covers that were invading the industry?! XD

harry posted on Mar. 9, 2011 at 11:25 AM
I much prefer the hi-fi cover. I like how the red-grey background sets the mood and brings the focus to the main characters. I like the shiny highlights to BG's costume and the glow added to PM. I guess I am not much for nostalgia.

Maxi posted on Mar. 9, 2011 at 3:17 PM
The first image is only flatted, it's only in the first stage of coloring process, prepared for the main colorist, who later changed the flats to proper colors and then added rendering and special effects.
I don't like the chromium gradient in the background either, people at Hi-Fi usually do better work.