not sure if anyone's tipped you off to this yet, but booster had a speaking appearance in a recent episode of teen titans go! (season 7, episode 46, "TV Knight 7") i can't speak to the quality of the episode as a whole as i've only seen the relevant part (i.e. where booster was on screen), but i'll admit to getting a chuckle or two out of it.

I found some confusion as to whether "TV Knight 7" is Teen Titans Go! season 7 episode 46 as reported on Fandom.com or episode 45 as counted by CartoonNetwork.com. Whatever number it is, it does indeed give Booster Gold his first speaking part in the series. 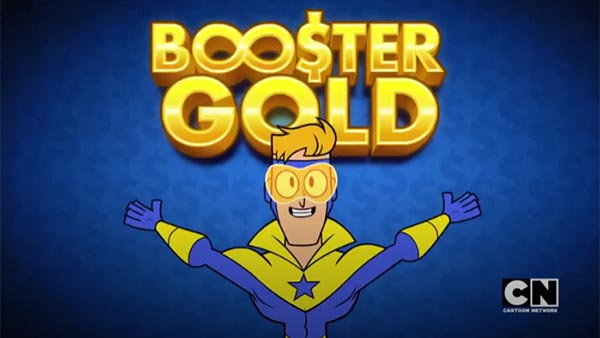 The Cartoon Network link above will take you to a preview of the episode, in which you can hear Booster in action, voiced by Fred Tatasciore.

Unlike Marty, I have watched the entire episode, written by Luke Cormican and Josh Weisbrod and directed by Cormican. It's got a real Robot Chicken feel to it, and like most anthologies, its short, unconnected gags — a Mad-style blend of television and comics tropes — can be a bit hit or miss. I thought the Booster Gold segment was the episode's highlight, but I admit I may have a bit of a bias there. 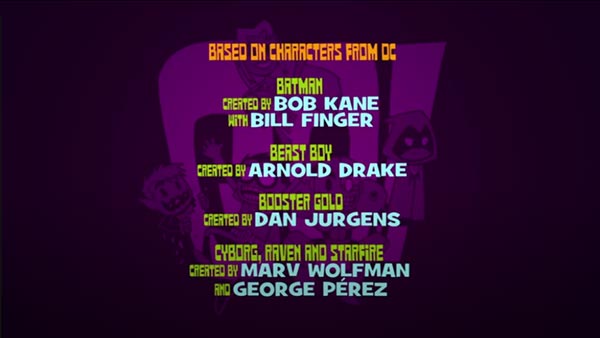 You'll laugh. You'll cry. You'll thank Marty for bringing this to your attention.

No Tips About the Future

According to their press release:

Before you rush out to play, know that DC Comics also released a digital tie-in comic book. The comic's plot actually involves some time travel antics, so naturally Booster Gold has to drop by. His one-panel appearance revisits Rip Hunter's chalkboard from Booster Gold Volume 2. 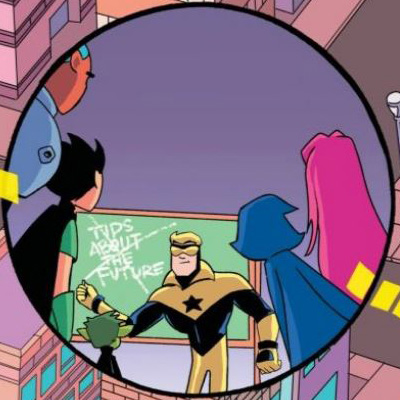 (Yes, the exclamation point is in a different place in those two products. Why? Go figure.)

Thanks to J for letting me know about the comic.

Wake Up to Action Next Week

Grab those rabbit ears, Booster boosters! It looks like Cartoon Network will finally be airing the final 6 Justice League Action episodes next week.

New episodes should air every day next week at 6:15AM Eastern/Pacific, but we've got our eyes out for two in particular. Per the episode synopses reported by SupermanHomepage.com:

“Watchtower Tours”
Monday, May 7 at 6:15 a.m. (ET/PT)
When Booster Gold starts to secretly give tours of the Watchtower to make some extra cash, he inadvertently brings in a super villain disguised as a tourist.

“She Wore Red Velvet”
Saturday, May 12 at 6:15 a.m. (ET/PT)
When Booster and the JLA come under attack by a mysterious and unrelenting new villainess known as Red Velvet, Booster comes to realize she’s actually the fiance he left at the altar in the future.

Dedicated Boosterholics may already be aware that these "new" JLAction episodes have been released overseas and via the Cartoon Network app, but this is the first time they will be coming to American televisions.

I already have my alarm clock set!

Warner Bros. Home Entertainment issued a press release earlier this month to tell the world that Justice League Action would be coming to DVD this October. The first release will be "Season 1 Part 1" and contain the first 26 episodes of the series.

While this is great news for any fan of fun television, beware that Booster Gold appears in only one of those episodes, "Night of the Bat" (the third episode of the series). Presumably we'll have to wait for next year's "Season 1 Part 2" to get the superb "Time Out." But we don't have to wait that long for more Booster Gold.

Tomorrow, Cartoon Network will air the Justice League Action episode "Booster's Gold" for the first time in America. The episode synopsis at CartoonNetwork.com reads "Green Arrow becomes involved with Booster Gold when he discovers that the self-centered superhero has brought dinosaurs back from the past for a money-making venture." Oooh. Count me in.

The episode was written by show producer Jim Krieg and Jake Castorena, director of "Time Out," does the same for "Booster's Gold." So I think we can expect good things.

You Can't Always Get What You Want

So you're still happy, even without Booster, huh?

Last week's poll question: More than six months in, how satisfied are you with Rebirth overall? (59 votes)

Generally speaking, I do think that the Rebirth DC Universe is an improvement over what came before. That said, I'll never be satisfied until I get my Booster Gold back.

On an unrelated note, for those of you like me who missed Booster Gold in the Justice League Action debut in December, TV Guide tells me that Cartoon Network is scheduled to rerun the episode "Night of the Bat" tomorrow morning at 7:30 AM Eastern. Don't miss it twice!

Brady Kj posted on Jan. 7, 2017 at 1:43 PM
You can watch it online. That's how I saw it.
It's a good show, despite its short episode time. DC combined elements from all its successful animated series and gave all the characters designs that suited their personalities.
Booster had a fun introduction. How he's portrayed in the future could go either way, but in the meantime, I thought it was loads of fun.