Gone are the days of "Blue and Gold," but that doesn't mean that Booster Gold is destined to be a loner forever. Remember that although Blue Beetle may have been Booster Gold's familiar partner, he wasn't the only one. For a while in the late 1990s, "Blue and Gold" was replaced with "Red and Gold" as Booster Gold joined forces with Firehawk! 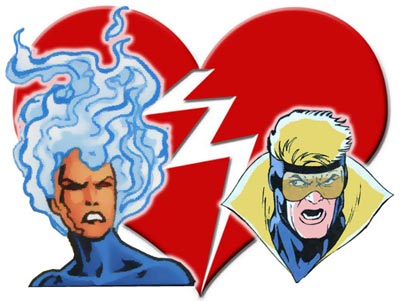 Originally, Firehawk was the partner of Firestorm. Even before her metagene was activated by a villainous science experiment, red-headed Lorraine Reilly had spent most of her time pursuing Firestorm romantically. Once she became Firehawk, Lorraine pulled out all the stops and joined her boyfriend in the never-ending battle against evil. Their relationship, like the Firestorm Matrix itself, ultimately proved unstable, and the pair grew apart.

Like Firehawk, Booster Gold found himself working solo after the dissolution of his Justice League. Blue Beetle had semi-retired from costumed crime-fighting, focusing his energy on inventing and managing a number of corporate enterprises, including Blue and Gold Software and Blue and Gold Express. With Beetle spending all of his time in the lab and Skeets' AI incorporated into his latest Power Suit, Booster was looking for a new partner to add fuel to his smoldering career. 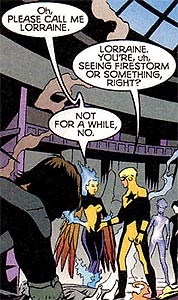 Destiny played its hand at a Teen Titans promotional event in a Metropolis toy store. Firehawk attended in the hopes of joining the reassembled Teen Titans. Booster Gold was crashing the party to promote his own line of "Action Toys." Sparks flew when the pair met, and a partnership was formed.

During the hectic events of the alien "Invasion!", the pair had worked together in Superman's strike-force against the alien's Australian stronghold. Booster no doubt remembered Firehawk's radiant beauty and grace under fire. Certainly Booster has always liked hot chicks, yet it is possible that Booster had even less pure motives when he suggested a partnership. 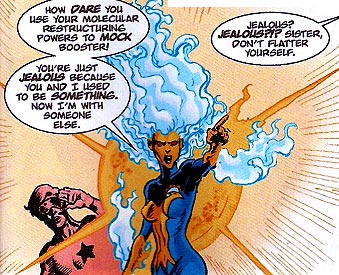 In their days together as teammates of Extreme Justice, Booster Gold and Firestorm had a difficult relationship. At the time Ronnie Raymond was the sole component of the Firestorm Matrix. Raymond's alcoholism resulted in immature, boorish behavior that was openly antagonistic toward Booster, who felt old and trapped in a life-supporting armor. Years later, Booster may have seen a partnership with Firehawk as a good way to get back at his former teammate by stealing Firestorm's old flame.

Given the nickname "Red and Gold" by the mainstream press (despite the fact that Firehawk's wings were now blue, not the red of original costume), Firehawk and Booster Gold were a hot topic of their day. The pair was linked romantically almost as soon as the partnership was formed. Both were coy about the nature of their relationship in public, but friends and family -- including Blue Beetle, who remained Booster's best friend despite the change in their professional relationship -- were aware that the pair had become more than just business partners.

Getting used to a new partnership is difficult with the firmest foundations; it couldn't have helped that Booster Gold and Firehawk were known for wearing their emotions openly. It should be no surprise that the partnership between Booster Gold and Firehawk pair blew hot and cold from the start. Break-ups and make-ups were commonplace between public appearances. As is common for the adrenaline junkies of the super heroic set, happiness eluded the couple as familiarity set in. Over time, the flame of their relationship dimmed and expired.

Exact details are unknown, but Booster had entered semi-retirement by the time of Identity Crisis and Firehawk would soon follow, officially extinguishing their partnership permanently. Both would eventually re-enter public life, but on separate paths. The pair have crossed paths since, but only in large group settings such as the memorial for Conner Kent and the battle against Superman-Prime. It is clear that there will be no rekindling of the old flame between the two. Booster Gold has moved onwards and upwards, leaving his days of playing with Firehawk behind him. 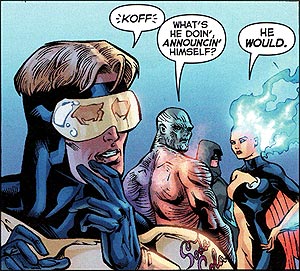 Read more about the disastrous relationship between Firehawk and Booster Gold over at Firestorm Fan.

Morgenstern posted on Feb. 14, 2011 at 11:02 AM
That was an interesting read, but does it make me a bad booster Fan that I have not read a single story that touches on their relationship? (Or even knew that they once were a serious item..or who Firestorm even is..)

Boosterrific [Official Comment] posted on Feb. 14, 2011 at 2:42 PM
Booster and Firehawk were an item for 3 years, and appeared together in 4 comics over that span. (The post-EXTREME JUSTICE, pre-SUPER BUDDIES were lean times for Booster.) So I would say that it does not make you a bad fan to not know about this relationship.

If you don't read a lot of comics or if you haven't been reading long, I would not expect you to know who Firestorm is. However, you will find that Firestorm is much more widely known than Booster Gold among fans of DC super heroes. Firstorm has been around since 1978 joined the Justice League in the 1980s. Firestorm was even a character on the SUPER FRIENDS television cartoon.

Morgenstern posted on Feb. 14, 2011 at 3:36 PM
Sorry I misspoke, I do know Firestorm (at least a bit) but Firehawk was new to mee.
Though I am pretty much out of the loop when it comes to his legacy, afaik there have been at least two or three guys with that name (and those seem to consist out two guys as well)

Kevin posted on Feb. 14, 2011 at 11:31 PM
Newsarama thinks the best Cross-Company girl for Booster would be...Squirrel Girl
...I could actually live with that.

The Irredeemable Shag posted on Feb. 23, 2011 at 10:30 PM
So is anyone going to mention Walter's BRILLIANT hidden code within this post?

Boosterrific [Official Comment] posted on Feb. 24, 2011 at 1:09 AM
In college, a professor once called me "clever, in a bad way," but "brilliant" may be stretching it a bit much, Shag.