Looking Forward to the Past

Bleeding Cool has discovered several yet-to-be-announced upcoming DC comics reprint collections, and one of them includes a Booster Gold adventure: 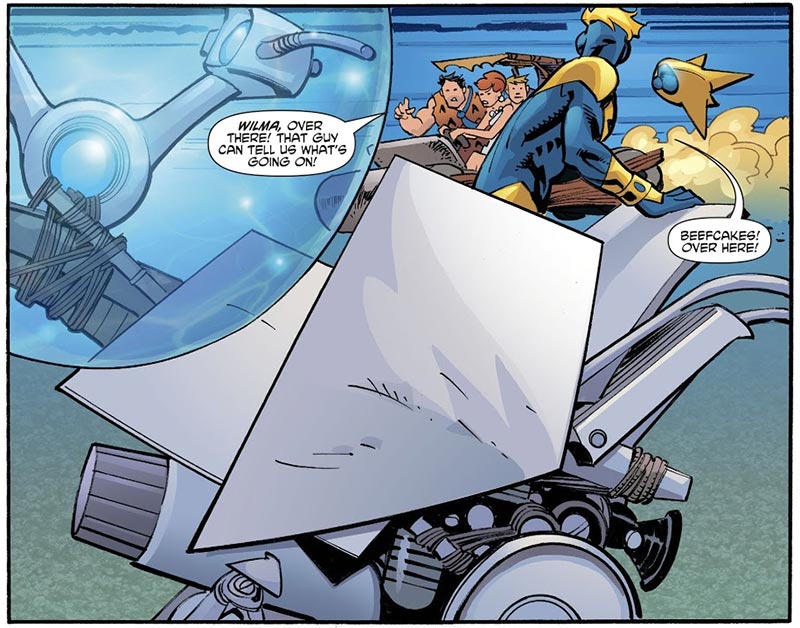 The Flintstones: The Deluxe Edition
HARDCOVER $49.99

Welcome to Bedrock, where Paleolithic humans head to dinner for a taste of artisanal mammoth after shopping at Neandertall & Big Men's Clothing, where Wilma shows her modern art, and where, if you take a plane, you could end up sitting on the literal tail section. It's Fred, Wilma, Pebbles, Dino, Barney, Betty and Bamm-Bamm as you've never seen them before! The Flintstones garnered significant critical acclaim for its modern take on the iconic Hanna-Barbera prime-time animated series. This darkly hilarious title casts an acerbic eye on issues like consumerism, religion, politics, and relationships that's both distinctly 21st century and uniquely the Flintstones!

Booster Gold/The Flintstones Special was released waaaay back in 2017, which feels like a few stone ages ago. Reprinted once already in DC meets Hanna-Barbera collection of out-of-continuity one-shots, it'll be nice to have it reprinted with The Flintstones mini-series (where it really belongs).

The Amazon listing says the book is scheduled for release on February 8, 2022. If you plan ahead, maybe your Local Comic Shop can get you a discount when it does finally come out.

ithildyn posted on Aug. 8, 2021 at 12:52 AM
Heyas! There was a Booster appearance on Teen Titan Go not too long ago. From what I gather, there is a gag where Starfire goes on a matchmaking spree at a superhero party, where she pushes various pairs together like Wondy & Aquaman, Supes & a potted plant, and of course Booster and Beetle.

Boosterrific [Official Comment] posted on Aug. 8, 2021 at 2:56 AM
I saw a picture of that on Twitter, which sent me to do a little digging, and I have updated the Boosterrific.com Other Media section with a more detailed list of Teen Titans Go! episodes Booster has appeared in.

ithildyn posted on Aug. 8, 2021 at 1:02 PM
Thank you as always for your thoroughness! Typo alert though, you accidentally wrote "Beetle Beetle" in the blurb. : )