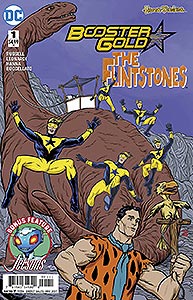 Cover Description: On the standard cover by the Allreds, Booster Gold reproduces Fred Flintstone's famous slide from the opening credits of The Flintstones cartoon.

Brief Synopsis: Booster Gold travels back in time to Bedrock to prevent an alien invasion.

Issue Summary: Booster Gold's date with Amy in 25th-century Gotham City is interrupted by an invasion of reptilian aliens. Reasoning that the race of aliens had visited earth before, he and Skeets travel to the past to confront them.

Arriving in Bedrock in the year 20,000 BC, Booster accidentally kills the alien Gorak. Skeets informs him that this action is what triggered the future invasion.

With the help of Fred Flintstone and Barney Rubble, Booster repairs his time sphere and returns to the future, where fellow time traveler Crabulon, with the aid of a time-displaced Gorak, helps convince the aliens to call off their invasion.

Better off for his misadventure, Booster goes on a second date with Amy.

This story has been reprinted in:
DC Meets Hanna-Barbera (2017)

Page 1, panel 1
FASHION ALERT: Booster Gold, having returned once again to the classic style of his pre-Flashpoint costume, reveals that he also can change goggle colors, if he likes. Skeets, too, has changed looks, returning to a football-shaped shell with four fins.

Page 1, panel 2
Booster keeps souvenirs from his time travel adventures, including a dodo (extinct since the 17th century) and the Arc of the Covenant (as seen in Raiders of the Lost Arc). He uses the Arc as a hope chest for keepsakes.

Page 1, panel 4
HIS STORY: According to Booster Gold's high school annual, he wore the number 5 on the football team, the "North Gotham Swashbucklers."

Page 2, panel 1
Booster Gold and Skeets walk through Crime Alley (the area where Batman's parents were killed) in 25th-century Gotham city on the Ides of March, the day Julius Caesar was killed in 44 BC.

Page 3, panel 1
Booster's exclamation, "Holy Gygax," is both a reference to the 1966 Batman television show, in which Robin often made observational puns, and Gary Gygax, the co-creator of the Dungeons & Dragons role-playing game. This comment is appropriate given the Joker and Waynes role-players seen nearby.

Page 4, panel 2
FIRST APPEARANCE: Booster Gold has a date with Amy at "Le Rat d'Egout," french for "The Sewer Rat." (Rat is one of the 13 remaining species of animals on Earth in the 25th century.)

Page 7, panel 2
BORROWING THE CAR: In DCnU "Rebirth" continuity, Booster's Time Sphere presumably comes not from 20th century Rip Hunter but 31st-century Brainiac 5. (The time sphere that Booster Gold was seen stealing in Convergence was of his time, the 24th century.)

Page 8, panel 4
FIRST APPEARANCE: Booster Gold and Skeets travel backwards through time in pursuit of the alien prophet, Gorak. They arrive in Bedrock in the year 20,000 B.C, so it's only a matter of time before he crosses paths with... 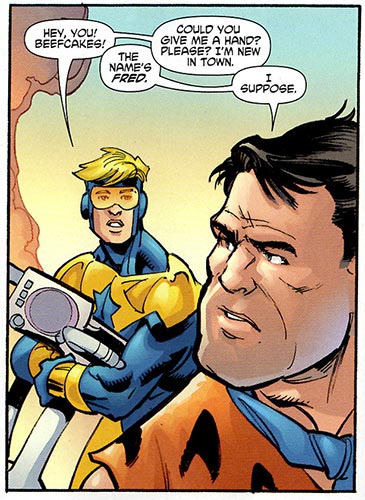 Page 9, panel 3
...Fred Flintstone, star of the Hanna-barbera cartoon The Flintstones, a cartoon broadcast by ABC from 1960 through 1966. Fred has met several aliens, including the Great Gazoo, so it's no surprise that Booster's unusual appearance doesn't faze the caveman.

Page 12, panel 2
Speaking into they Time Sphere's radio, Booster calls himself and Skeets "BG and the Bear." This is in reference to yet another television show, B.J. and the Bear, which aired on NBC between 1797 and 1981. B.J. was played by teen idol Greg Evigan, who would have made a fine Booster Gold.

Page 13, panel 1
FIRST APPEARANCE: It seems that Booster has formed a loose association with other time travelers, several of whom don't have a very good concept of the dangerous times they are visiting. One is eaten by a tyrannosaurus, and another, Dr. Clocker, is caught in the eruption of Mount Vesuvius that destroyed the city of Pompei. A third, Crabulon, attends a The Who concert in the late 20th century, presumably some time in the late 1960s or early 70s.

Page 14, panel 2
Surprisingly, Alfred Pennyworth, Batman's faithful butler, is also listening in to Booster's broadcast in the year 1966. (The date is no coincidence. It's yet another reference to the Batman television show.)

Page 15, panel 3
Booster Gold is assisted by Bedrock scientist Professor Sargon and his "state-of-the-art" Applecus computer (which is little more than an abacus, as first seen in The Flintstones #5). Sargon is a parody of famed astronomer Carl Sagan.

Page 17, panel 1
A PAIR OF DOCS?: Skeets reveals that the alien invasion that started the issue was caused by Booster Gold's having traveled back in time to stop the alien invasion. This is exactly the sort of impossible paradox that Time Masters are supposed to prevent.

Page 25, panel 4
SPOILER WARNING!: The return of Gorak from the afterlife (by way of time travel) is a sly reference to the religious prophet Jesus Christ of the Christian religion. A critical review of the role that religion plays in Bedrock society is one of the recurring themes Mark Russell explores in The Flintstones comic book. Reveal

Page 30, panel 1
Booster's order of a mammoth side of ribs is a reference to the closing credits of the original The Flingstones cartoon.

Boosterrific Review: Comic books are generally better when they aren't taken too seriously, and this is no exception. Writer Mark Russell dials back the satirical tone of his usual The Flintstones stories to deliver this comical farce of time-travel shenanigans appropriate for fans of the cartoon. While the irreverent and lightweight treatment of Booster Gold is sure to rub some fans the wrong way, I found this to be a generally enjoyable comic that only improved on repeated readings.