The Black Beetle Is the Blue Beetle

If we're going to find out who Black Beetle is, we have to start with a few basic assumptions, the first and foremost of which is that such a deduction is possible. If Black Beetle is someone we've never met before, any further detective work is folly. Fortunately for us, this primary assumption is reinforced by genre convention as well as on panel in Booster Gold #17 (in Scar's vision of the future) and Booster Gold #25 (when Skeets scans Black Beetle). Therefore, it's fairly safe to say that we'll know who Black Beetle is when we finally meet him (especially since that's what Dan Jurgens has said, according to "Gold Exchange" columnist Russ Burlingame in 2009).

Assuming that Black Beetle is likely to be someone we already know, we can begin our list of suspects with characters who have already crossed the path of Booster Gold. That includes characters we are really familiar with, like:

Let's start here, if for no other reason than to scratch it off the list. There is almost no reason to believe this is possible.

Besides, Ted is dead. Introducing Ted Kord as Jaime Reyes' greatest enemy in the middle of an adventure in which Booster Gold breaks time in order to save Ted Kord... well, that's a hard sell, even in a comic book about time paradoxes.

No, if any Blue Beetle is the Black Beetle: 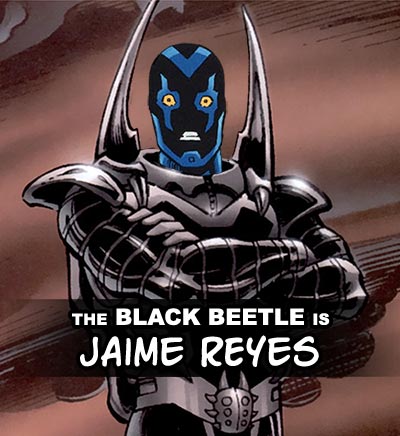 In Booster Gold #10, Black Beetle calls himself Jaime Reyes' greatest enemy. He claims to have the same alien Reach scarab as the other Blue Beetles (Booster Gold #6), and he's certainly done his homework about the Blue Beetles and their fate (Booster Gold #4 and #5). He even wears a costume that looks strikingly similar to Jaime's. That's all circumstantial evidence at best, but there's more.

In addition to being another time paradox, it's not the most convincing story. (If the Black Beetle has Jaime's sentient scarab, why doesn't he talk to it or use it in the same ways that Jaime does?) However, it does explain why Black Beetle suddenly materialized from thin air to pointlessly taunt Jaime in the previous issue, and it does tie-in well with the unexpected emergence of bloodlust in Jaime's scarab.

So is the Black Beetle a liar? Probably. But maybe he's lying to disguise a more plausible origin story that he all but confirmed in the previous issue. We'll cover that possibility tomorrow.

[Follow this link to read Part 2 of this series.]

Tinuvial posted on Sep. 15, 2014 at 3:17 PM
To briefly quibble with some of your facts, I believe I found somewhere online (it's been awhile) where the authors/artists behind BG 1M said that it's Ted Kord who breaks into Kord Industries. In fact, originally it was supposed to be quite clear who was breaking in but the Powers That Be demanded it be more 'mysterious'. So they left us with Ted's signature laugh as a clue to who it was. I wish I could remember exactly where...I believe I found it on an old archived forum thread.

Ryan posted on Sep. 15, 2014 at 4:42 PM
This is a great idea! Lots of good points. I agree it has to be someone that was in the series. I have never considered Jamie as a possibility! I'm excited to read tomorrows!

I'm sure that Geoff Johns and Jeff Katz dropped the epilogue to BOOSTER GOLD 1,000,000 in as a going away present when they left the series, but like so many other teases in BOOSTER GOLD volume 2, it was never resolved conclusively in any way in the published comics (which I always defer to over whatever any creator says outside the medium).

Internet chatter implies that Geoff Johns may have confirmed his intention in a foreword to the 52 PICK-UP trade. (Anyone reading this have a copy to confirm or deny?) There was some miscommunication in the "Gold Exchange" column discussing issue #27 ( http://comicrelated.com/news/4377/the-gold-exchange ) about whether the mysterious figure was intended to be Jason Goldstein or Booster's father. Jurgens has all but denied that it was Ted Kord ("I think Ted died," he told Russ Burlingame, although he teased the possibility that Ted visited his old haunt before returning to his ultimate fate to set the timeline right).

I prefer to think it was older Booster as that makes the most sense given what has published. (Only 2 people can open the door, Ted Kord and Booster Gold, and Ted is dead but we have multiple versions of Booster Gold running about, the logical conclusion is that it was a future version of Booster who opened the door.) However, it remains open to interpretation. I won't be disappointed if someone eventually reveals it to be Ted Kord.


RussBurlingame posted on Sep. 16, 2014 at 2:38 AM
I'll have to dig around to look, but I believe it was Jeff Katz who had said it was Ted Kord, and Jurgens who said otherwise, with Johns remaining silent on the matter.

AJU posted on Sep. 16, 2014 at 12:31 PM
Boosterrific: If I'm not mistaken the door to the Bettle Cave works on Ted and Michael's DNA. So I guess someone like Rip may be able to enter somehow (since Rip is Booster's son).

Boosterrific [Official Comment] posted on Sep. 16, 2014 at 2:46 PM
You're not mistaken. By the same logic, it could also be Daniel Carter or Supernova III. But which of them is going to say "Bwa-ha-ha"?