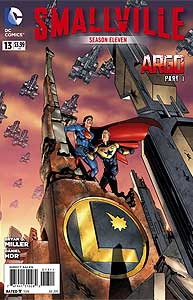 Cover Description: Superman and Booster Gold stand on a spire above the logo of the Legion of Super-Heroes.

Brief Synopsis: Booster Gold unexpectedly loses his powers and finds himself transported to the 31st century with Superman.

Issue Notes: This book was originally released online at Comixology.com in three installments (#42-44) for 99¢ each. This print edition has a cover price of $3.99 — $1.02 more than the cost of the digital issues combined — and for this extra expense this book contains 2 additional pages of original art and character sketches, a 2-page synopsis of Smallville season 7 (episodes 1-10), the DC Comics All Access page, and 11 pages of ads. The digital version of this issue also has a cover by Cat Skaggs that includes Booster Gold.

Page 1, panel 4
This issue continues the story of Booster Gold in Smallville continuity, as last seen in the 10th season television episode "Booster." The issue re-introduces Smallville's Skeets, who is much more than a disembodied voice and takes a far more involved role in the action. Smallville's Skeets looks like a silver beach ball.

Page 1, panel 6
The 66th parallel is roughly the delineation of the Antarctic Circle. Essentially, Skeets is saying that no one rescues antarctic researches better (or more often) than Booster Gold!

Page 2, panel 4
It is implied that the researchers Booster is rescuing are employees of Ted Kord. In the DC Universe, Ted Kord was Booster's friend and teammate, aka the Blue Beetle. In the world of Smallville, Kord is Booster's sometimes employer.

Page 4, panel 1
Booster is saved by the timely intervention of the Blue Beetle. Booster, Blue Beetle Jaime Reyes, and industrialist Ted Kord were all introduced to one another in the "Booster" episode of Smallville.

Page 8, panel 6
Being from the future, Booster Gold is aware of Clark Kent's secret identity as Superman.

Page 11, panel 3
A young boy is chastised by his mother for calling out to Skeets. Popularized in the song "Get Low," the word "skeet" has become American slang for ejaculation.

Page 13, panel 4
Skeets meets Booster Gold in the 31st century. While Booster was transported instantly through time by Legion of Super-Heroes technology, Skeets has come to the 31st century the long way: by waiting in one place for 1,000 years.

Page 18, panel 6
Booster Gold's costume is criticized by bystanders. Booster's 25th-century costume may look futuristic to 21st-century eyes, but it is well out of fashion by the 31st century! (Note also that one of the critics wears what looks like an Omnitrix as seen in the television show Ben 10.) 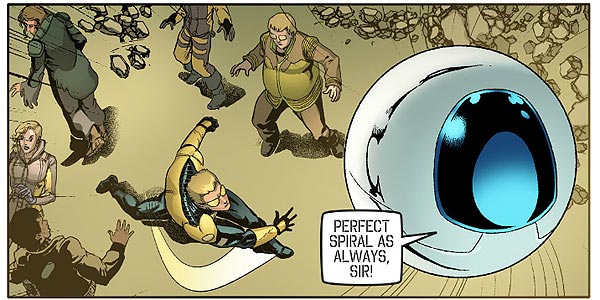 Page 21, panel 4
Skeets is being obsequious. Booster is indubitably the greatest quarterback of all time, but even he cannot throw a "perfect spiral" with a round ball.

Page 22, panel 3
Booster Gold explains that he has traveled through time only once before, from his present in the 25th century to our present in the 21st. In the next panel, Booster describes himself as "the greatest hero you've never heard of," although in the more familiar DC Universe he did not pick up that moniker until after he had joined Rip Hunter as an apprentice time-traveling Time Master.