Cover Description: Booster Gold and Blue Beetle stand on a street outside a brick house while Mister Miracle and Big Barda hide inside, trying not to be seen.

Page 1, panel 1
Appearance of Professor Ivo, a criminally insane genius in the field of robotics. Ivo and his power-duplicating android masterpiece, Amazo, have long been a thorn in the side of the Justice League, first encountering the League in its earliest days in The Brave and the Bold, Vol. 1 #30. Ivo was recently directly responsible for the death of Leaguers Steel II and Vibe.

Page 2, panel 1
Ivo has been watching a double feature of the movies Citizen Kane (1941) and Touch of Evil (1958). Both films featured and were directed by cinema legend Orson Welles and are critically considered among the best films ever made.

Page 6, panel 1
Booster Gold and Blue Beetle II are taking a trip in Beetle's Bug to visit their friend and teammate Mister Miracle in his civilian identity in the fictional town of Bailey, New Hampshire. This is essentially a housewarming visit, since Miracle and his wife Barda have just moved into the new town since the disaster in DC Bonus Book #7.

Page 6, panel 6
Booster makes the offhand comment, "Lord, when will I ever learn?" This reference to the "Lord," commonly an honorarium for the Biblical God, is unexpected if Booster is truly an Atheist (as expressed in Justice League Annual #2). However, it could easily be a thoughtless speech idiom or a reference to Booster's boss, Maxwell Lord.

Page 13, panel 1
For the second time, Beetle calls Booster "the Boy Wonder." Again, Booster offers no rejoinder, perhaps because he's surrounded by a group of fans with stars in their eyes. (See Justice League International #19.) 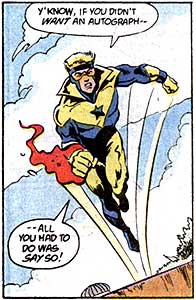 Page 14, panel 4
In order to cover up the fact that the Justice League would visit Scott Free, the civilian identity of Mister Miracle and a general secret, Booster and Beetle pose as impostors of themselves, "actors dressed as your favorite Justice League members," and sign autographs at Miracle's store, Free's Fixit Shop.

Page 16, panel 8
Booster first encounters Ivo, who has arrived to "destroy the Justice League." Despite Ivo's distinctively disfigured appearance (as a result of his attempts at immortality), Booster has no idea who Ivo is. Ivo, however, recognizes Booster Gold as a member of the Justice League. (Membership has its privileges.)

Page 21, panel 1
Despite Booster's previous boast to Superman in Action Comics #594, Booster only recognizes that he is fighting an android when Beetle accidentally rips its scalp off.

Boosterrific Review: Clearly, writers DeMatteis and Wein are interested in delivering a series that turns super-heroics into a classic American sitcom. And they succeed admirably. However, in success is mediocrity, as the classic American sitcom rarely provides groundbreaking entertainment, preferring instead absurdist situations and recycling familiar jokes. Certainly the plot, dialogue, and art are all well-crafted, but the characters seem the hollow caricatures that sitcoms require for their frequent punch lines. An amusing issue that somehow manages to be less than the sum of its parts.