“The One Man Justice League” 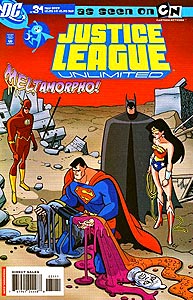 Cover Description: Kneeling in ruins, Superman clasps the melted remains of Metamorpho as Batman, Flash, and Wonder Woman look on. (No Booster Gold.)

Page 5, panel 1
Booster is walking down a corridor when Atom approaches Metamorpho.

Page 9, panel 2
In flashback, Booster is seen with Dr. Light, Green Lantern, Steel, and Skeets when Metamorpho single-handedly defeats the villain Solar Flare (who Booster took down in Justice League Unlimited #25). In this panel, Solar Flare looks a lot like Brimstone (who appeared in the Justice League Unlimited television episode "Initiation").