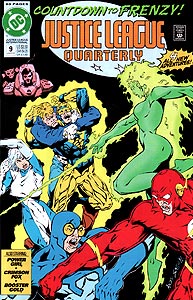 Cover Description: As Ira Quimby watches on in the background, members of the Justice League fight amongst themselves. Booster Gold struggles against a Guy Gardner choke hold, Fire shoots a ray of fire at Ice, and the Flash punches the Blue Beetle.

Brief Synopsis: Booster Gold struggles to salvage a little bit of the future.

Story Notes: According to an editorial box on the first page of this issue, the events in this issue take place prior to the events of Justice League America #69. This story presents another in a line of confusing tales regarding Booster Gold's knowledge of the future, seemingly contradicting previous theories about the nature of time travel in the DC Universe.

Page 59, panel 1
On a Wednesday afternoon, an out-of-uniform Blue Beetle II and Booster Gold are enjoying hamburgers at a diner, comparing how many criminals they have caught in the past week. Booster's costume is presumably in the briefcase that he cradles in his lap. Booster mentions that he had eaten at Nedick's previously in the week. Nedick's was a hot dog chain in New York City throughout most of the twentieth century which went out of business for a time in the 1980s and 1990s before being revived in the year 2002.

Page 59, panel 3
Booster's wallet is stolen by a street urchin... 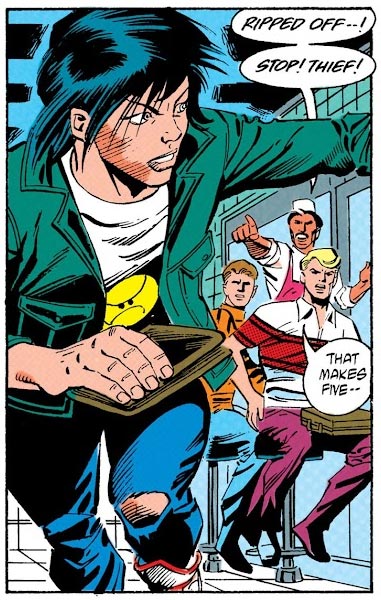 Page 60, panel 2
...leading to Booster's decision to use a Booster Shot to subdue the thief. As a United Nations super hero, Booster doesn't have to worry about such concepts as "undue force."

Page 61, panel 1
EXTRA, EXTRA: Oops. Booster's exploits at lunch land him in the New York News newspaper, much to the displeasure of Maxwell Lord. 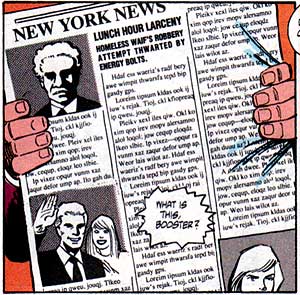 Page 61, panel 4
Booster's room at the Justice League Headquarters is shown to be an unkempt mess. Clothes are strewn around the room and an open aluminum can is under the bed. The sign on the door reads "hazardous waste dump." The only picture seen on the walls is of Booster's favorite person: Booster Gold.

Page 65, panel 1
The business card that Booster has given GiGi reveals his title as "Associate Consul, Super-Hero." Presumably, this same title applies to all active members of the United Nations' sponsored Justice League.

Page 65, panel 5
HIS STORY: Booster reveals that in the future GiGi's birthday, April 9, will be a birthday in 62 states. Notice that he does not say "all 62 states." Just how many states will the United States have in the 25th century? And, more importantly, why would any of them celebrate the birthday of a media personality? (Though this does shine some light on Booster's drive to become a celebrity.)

Page 66, panel 3
Booster insists that his motives in helping GiGi are altruistic. He is merely interested in helping her to avoid some rough personal times. Max doesn't believe him.

Page 69, panel 2
SILVER SCREEN: Max Lord is planning a meeting with a director interested in making a movie about the Justice League International. It has been several years since Booster Gold: The Movie fell through, and if Booster wasn't so preoccupied with GiGi, he would no doubt be chomping at the bit to sit in on the meeting.

Page 69, panel 4
SPOILER WARNING!: As Booster rushes GiGi out the door of the JL Embassy in order to avoid the man that Max is meeting, he makes rushed introductions to Bloodwynd, Blue Beetle, and Maxwell Lord by their actual names. However, he accidentally calls Bloodwynd, "J'onn," a revealing mistake since this book was published months prior to the events of Justice League America #74. Reveal

Page 70, panel 4
Beetle reminisces about the previously undocumented time that a horse ate Booster's Legion Flight Ring. (Now that is a story that needs to be told!)

Page 70, panel 6
HIS STORY: Booster's dialogue reveals that his actions in this story have changed the course of history without his being aware of it. Way back in Booster Gold, Vol. 1, #6, Booster's sidekick Skeets stated that Booster couldn't have returned to the past unless he was supposed to have been in the past. However, after the events of this issue, it becomes clear that if Booster did return to the past, he would change his own timeline and those affected by it, mandating that in the future, they would recognize that he must return to the past. In other words, Skeets' argument in favor of predestination was incorrect, though he couldn't have had the knowledge to know that he was incorrect because he would be eternally unaware of changes in history. What this story reveals definitively is that in the DC Universe, an individual can change events in time to alter history, as any readers of Armageddon 2001 already know. (For a more complete consideration of time travel in the DC Universe, go here.)

Boosterrific Review: Four stories comprise this anthology issue. "Cherchez L'Homme" (Crimson Fox) and "You Bet Your Life" (Power Girl) showcase the Justice League Europe/International. Booster Gold appears in "Frenzy" and "Tomorrow Belongs to Geralyn." For a change in this anthology series of varying quality, every story in this issue is above average, making this issue an enjoyable read.

For the second issue in a row, Mark Waid once again uses a familiar plot device to pit the Justice League against itself in the story "Frenzy." This would be a better story if Blue Beetle's math was better, but the average reader probably won't notice the failure and will find something to enjoy in the tense situation.

Booster Gold shines in the spotlight story "Tomorrow Belongs to Geralyn." Booster successfully straddles the line between his buffoonish public persona and the inner hero known to his friends and fans. Writer Elliot S! Maggin toys with the repercussions of time travel in the DC Universe, creating a plausible explanation for all future continuity revisions without blatantly contradicting past stories. This story is fun all the way around.

(1 vote)
Rally York (Feb. 20, 2018, 13:26:09)
This is the way time travel ought to be treated. People can change the past all right, but when they return to their "present" the changed events eventually reclaim their consciousness - pretty much as fast as brain cells are replenished.