“Only the Lucky Ones Die!” 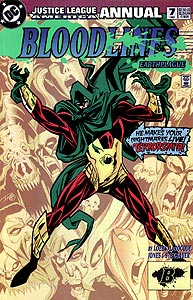 Cover Description: Terrorsmith poses while the faces of several Leaguers and aliens become distorted in the background. (No Booster Gold.)

Brief Synopsis: The Justice League attempts to quell the growing public panic over the rash of attacks from monstrous space parasites.

Issue Notes: The events in this issue most likely take place following Guy Gardner #15. Booster Gold debuted his new armor in Justice League America #80, and there isn't an opportunity for the events in this story to take place until immediately prior to Justice League America #84. This issue is a tie-in to the summer-long "Bloodlines" storyline running throughout the 1993 DC annuals. 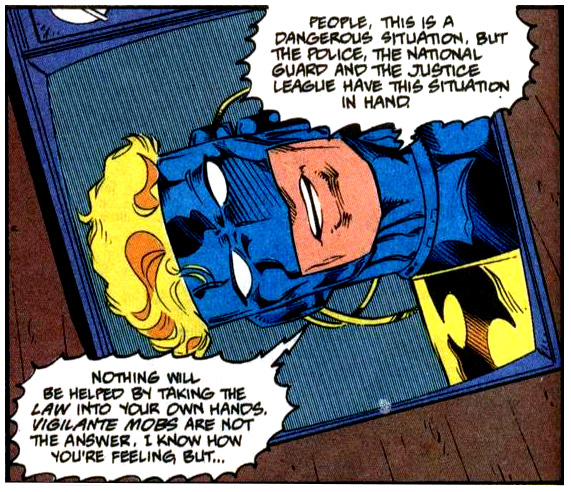 Page 5, panel 1
MEET THE PRESS: Booster Gold appears on television, making a public address to calm the fears of a public panicking in the wake of several dozen attacks from a group of alien parasites that consume human spinal fluid. Booster wears his new Mark II exoskeleton, unveiled in Justice League America #80.

Page 13, panel 4
Booster Gold joins Guy Gardner in an assault against Angon, one of the so-called "space parasites" at a high-rise construction site. The large, red beast holds two hostages as it towers above a frightened crowd of onlookers. As one of only three of the space parasites without wings, it is unclear how Angon climbed so high while holding two humans hostage.

Page 16, panel 3
After a powerless Fire saves Guy Gardner from falling to death, Booster Gold carries Guy back into the fight, chastising him all the while for his "impetuous" actions. Meanwhile, Angon escapes.

Page 26, panel 1
Inside the JLA Headquarters, Booster complains to Maxwell Lord that he hates making the previously seen public service announcements about the space parasites, much to Oberon's amusement. Booster feels that it is lying to the public, and he doesn't care for it. It would seem that the only thing that Booster likes to sell anymore is Booster Gold.

Page 26, panel 4
BUSTER GOLD: From off-panel, someone calls Booster "Buster," reviving the "no respect" running gag not seen in over a year. It is never made exactly clear who delivers the classic line this time.

Page 27, panel 1
FIRST APPEARANCE: First appearance of Krag, Shadowstrike, and Slingshot, three new heroes created by the side effect of the space parasites' attacks on them. They are assisting the Justice League, and Maxwell Lord introduces them to Booster Gold.

Page 28, panel 4
Booster attacks Shadowstrike after Shadowstrike attacks Guy Gardner, kicking off another of the Justice League's recurring hero-on-hero battles. In a rare twist on a familiar setting, it's not Booster fighting Guy, but the two against a third hero.

Page 36, panel 1
The fight between Booster, Guy, and the New Breed heroes is anticlimactically ended by the arrival of Fire, Maxima, Ray II, and Wonder Woman.

Boosterrific Review: A standard super hero action tale, this issue does little, if anything, to advance the summer-long "Bloodlines" storyline.