Brief Synopsis: As the Justice League waits outside of Maxwell Lord's hospital room, Waverider travels the time stream to visit their futures.

Issue Notes: Events in this book take place immediately following the events of Justice League America #52, which does not include an appearance by Booster Gold. This story in this book is a tie-in to the summer-long "Armageddon 2001" storyline running throughout the 1991 DC annuals. The future events depicted in this issue, since proven impossible in DC Universe continuity, are still very similar to the events depicted in issues of the mini-series Formerly Known as the Justice League.

This issue was promoted via house ads that include Booster Gold.

Page 29, panel 1
Booster Gold arrives at the New York Justice League International Embassy to join the vigil for Maxwell Lord. Already present are Blue Beetle, Fire, General Glory, Ice, L-Ron, and Waverider, who is disguised as Captain Atom. Though not pictured, Martian Manhunter is in the building.

Page 29, panel 3
Booster has brought "gourmet treats" from the restaurant Ivory Tower, a fictional restaurant likely based on the White Castle chain of fast food eateries.

Page 30, panel 1
ALTERNATE REALITY: Waverider's investigation of Booster Gold's future sees him returned to the 25th century and once again employed as a janitor in the Space Museum. Booster explains that he sold the costume and rights to "Booster Gold" in order to finance a scheme with Blue Beetle. While this is a plausible future, it is not necessarily the actual future. Waverider's trips through time have a tendency to change the events that he observes, meaning that what he sees is likely to not be the way the future will play out.

Page 31, panel 3
Booster's name tag identifies him as "M. Carter," employee # 00769480 of Drooley Janitorial Services. Presumably, the Space Museum employs contract firms for sanitation services, explaining why a convicted time offender like Michael Jon Carter would be allowed to return to work in the same museum he once stole a time machine from. 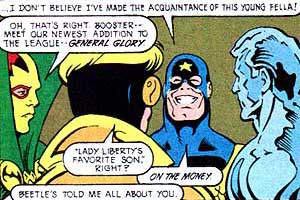 Page 45, panel 1
In another one of Waveriders visions of a potential future, Booster appears in a future incarnation of the Justice League with Aquaman, Blue Beetle, Echo, General Glory, Guy Gardner, Ice, and Vapor.

Page 50, panel 1
In a third vision by Waverider, Booster is seen traveling (uncomfortably) through time in a cube.

Boosterrific Review: A fantastic annual that manages to tell an engaging story utilizing the entire ensemble cast while staying within the confines of the DC Universe spanning "Armageddon 2001" storyline formula while still advancing the plot of the ongoing Justice League titles. If the issue has any drawbacks, it would be an overdose of silly humor, but that shouldn't be a deterrent to the fans of the series most likely to be interested in reading an annual.

(1 vote)
KMD (Feb. 7, 2010, 15:32:15)
A lot of cheep laughs but an interesing look at the JLI. Waverider makes a shrewd observation in this issue-the JLI, while often at each other's throats, are tied together with strong bonds of affection despite it all. Interesting look at the future and nice to see Booster Gold use his brain a bit.