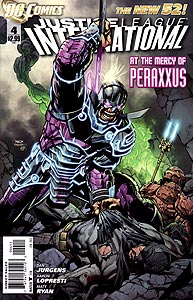 Cover Description: With August General and Fire incapacitated in the background, Peraxxus stands over the fallen Batman, preparing to deliver a fatal blow. (No Booster Gold.)

Brief Synopsis: The JLI's encounter with the Signal Men goes from bad to worse with the arrival of Peraxxas and his plan for destroying the world.

Issue Summary: Booster Gold and Batman continue their struggle against the animated rock creatures in the Signal Man's underground Peruvian lair. Despite their best efforts, they are soon overwhelmed.

Meanwhile, Guy Gardner regains consciousness on an alien space ship orbiting the Earth. Gardner's investigation of the ship reveals that it is tracking the actions of the Justice League International and the Signal Men. Before Gardner can react to this information, he is again assaulted by Peraxxus. This rematch last longer than their first fight, but ends the same way as Gardner is defeated and teleported to Peru.

In Washington, D.C., Andre Briggs and Emerson Esposito cope with the political fallout from the JLI's apparent failure across the globe. The pair have lost contact with the League and are unaware that the entire team has been captured and teleported to Peru.

Though immobile, Batman manages to coerce Peraxxus into willingly revealing his plan to use the ancient Signal Men to destroy the Earth for its natural resources. Hearing this news, the JLI breaks free of their restraints and attacks Perraxus. After a brief battle, Peraxxus initiates his plan and begins the destruction of the world.

Issue Notes: Peraxxus' alien dialogue is written in a cryptographic substitution code based on the Comicraft font GobbledyGook that can be deciphered with the following key:

Page 2, panel 1
Booster Gold and Batman battle the overwhelming army of rocky artificial life-forms that guard the underground lair of the Signal Men. Needless to say, their original plan to sneak in and discover the Signal Men's plans has not gone well.

Page 2, panel 3
POWER DOWN: Booster is overwhelmed by the rock men (who for the second time in two issues are described as having grabby hands). It is unclear how the creatures could be grabbing Booster through his force field.

Page 5, panel 2
Peraxxus's alien speech translates to "The alarm! There is an intruder!" Of course, Peraxxus is responsible for knocking out Guy Gardner in the previous issue, so his appearance here shouldn't be a surprise.

Page 6, panel 1
Peraxxus' dialogue is intended to translate to "Puny Green Lantern! I will defeat you with ease!" There are two typos in the dialogue ("ease!" is actually printed as "eae!"), but this is understandable as it is doubtful that any DC copy editors can proofread alien languages.

Page 7, panel 2
Peraxxus' dialogue likely translates to "I shall not need a third!" (The one-word glyph appearing here in the printed text is not repeated anywhere else in this issue and is different from the previous glyph used for the letter "I".)

Page 7, panel 3
Peraxxus' dialogue translates to "I will simply destroy you now!" This sentence contains the third different glyph used to represent the capital letter "I" in Peraxxus' alien language. Apparently, aliens of Peraxxus' race have rather large egos.

Page 8, panel 2
Peraxxus' dialogue translates to "I've had enough of your chatter, earthling!"

Page 8, panel 3
Peraxxus' dialogue translates to "The translators in my ship...". This sentence as published contains a typo: "translators" literally translates to "tanslators" (missing an "r"). Grammar fans will note that a literal translation of this sentence creates a subject-verb disagreement with the conclusion of the sentence in the next panel (plural "translators" vs singular "enables"). What a crazy alien language.

Page 9, panel 4
Peraxxus and Guy Gardner unexpectedly teleport into the Peruvian lair where Batman and Booster Gold are being held captive by the rock men. Moments later...

Page 11, panel 4
...Peraxxus teleports the other captured members of the JLI into the chamber. Ice and Rocket Red were captured in Russia; Vixen and Fire, in South Africa; Godiva and August General in Iron, in Canada.

Page 12, panel 1
Peraxxus reveals that his motivation for the invasion of Earth is to mine the planet for its mineral wealth. This makes Peraxxus a member of a long line of alien invaders in popular media -- from novels like H.G. Wells War of the Worlds to television's V to movie Independence Day -- who seek to exploit the Earth's natural resources. The website tvtropes.org refers to this type of alien as a "Planet Looter."

Page 12, panel 6
Peraxxus describes the Signal Men as artificial sentinels of a long-dead race of aliens. That makes the Signal Men a member of a long line of alien invaders in popular media -- from novels like Larry Niven's Ringworld to television's Stargate to the movie 2001: A Space Odyssey -- who seeded life throughout the galaxy. The website tvtropes.org refers to this type of alien as a "Precursor."

Page 14, panel 3
If anyone should know the outcome of this event, it should be the time-traveler Booster Gold, who seems to insist that the end of the world is not imminent. As though to illustrate this, Ice chooses this moment to demonstrate her usefulness to the team. Though the artificial rock that holds the members of the JLI captive can absorb the energy blasts of Booster Gold, Fire, and Rocket Red, they are susceptible to the powers of Ice. Unlike her fellow members who generate energy, Ice's power absorbs (or at least redistributes) energy, specifically heat energy. This seems to be weaken the team's bonds considerably, allowing them to enforce Booster's declaration of resistance (or inevitability?). 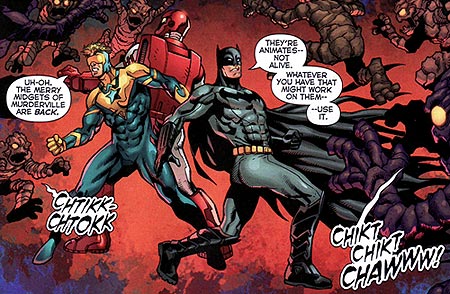 Page 18, panel 6
Despite the JLI's efforts, their lack of teamwork allows Peraxxus to enact his plan to destroy the world.

Page 20, panel 5
SPOILER WARNING!: From orbit, the energy of the four Signal Men can be seen erupting from the Earth. According to the story, the Signal Men are in Canada (green energy), Peru (yellow energy), Russia (red energy), and South Africa (blue energy). However the energy beams seen on this panel do not align with any of those four locations. Instead, the green energy seems to erupt from Australia instead of Canada; yellow energy, the Caribbean Sea instead of Peru; red energy, Hawaii instead of Russia; blue energy, the North Pole instead of Russia. Reveal

Boosterrific Review: This issue is mainly set-up for the climax, and the heroes play a minor role in events. Much of the issue is spent with the heroes helpless as the villain and his motivation are established. This change of focus, while frustrating, is welcome after the repetitive and unproductive events of issue #3. Cumulatively, this issue is far better than the previous issue, and that's good enough for now.