“Cult of the Machine, Part One: Where the Day Takes You” 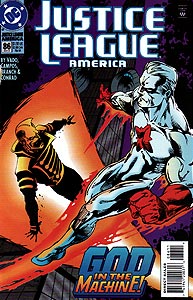 Brief Synopsis: Separated to deal with crises across the globe, the Justice League is faced with an old and powerful foe. 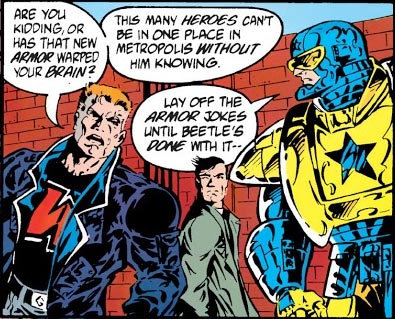 Page 1, panel 1
FASHION ALERT: Booster Gold joins his teammates Guy Gardner, Maxima, Maxwell Lord, and Wonder Woman on a rooftop with a view of the Daily Planet Building, the Galaxy Building, and Lexcorp Tower in Metropolis. Booster showcases his new, Blue Beetle-designed exoskeleton version Mark III, a much more graceful, if slightly bulkier version of his previous Mark II armor. The most notable changes to this armor from the previous version are the addition of the utility belt and enclosed helmet. There is now a blue star on Booster's forehead in addition to the star on his chest.

Page 3, panel 1
The Justice League is joined by Superman, who refuses to rejoin the team. A year after dying in Superman, Vol. 2, #75, the Man of Steel is back in action.

Page 4, panel 3
POWER UP: Booster flies away from the rooftop with no visible means of propulsion. Presumably he is using his Legion Flight Ring instead of any thrust generated by the armor.

Page 13, panel 1
Booster joins Fire, Guy Gardner, and Wonder Woman for Ice's "welcome home" party. Ice has refused to attend, angering Guy Gardner. Ice is still mourning the death of her father and adjusting to the dramatic increase in her level of power following the death of her brother at her hands in Justice League America #85.

Page 17, panel 1
Booster, Fire, and Ice watch as Wonder Woman orders Captain Atom, apparently returned to active duty since the previous issue, to aid the F.B.I. in serving a warrant. Also present are Blue Beetle II, Oberon, and the Ray II, who standby for future action as the world seems to spiral into chaos.

Boosterrific Review: Emotional instability meets terrible artwork in this issue as the Brazilian Marc Campos takes over drawing duties. Campos' artwork, an affront to quality, is indicative of the excessive use of line and emotional expression rife throughout the artwork of the 1990s. The frenetic artwork is especially discordant when coupled with the issue's content, primarily small-scale character-building vignettes.