“Lo! There Shall Come An Ending (And None Too Soon!)” 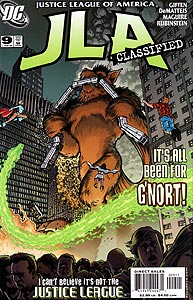 Cover Description: A giant G'Nort destroys a subway train and a high-rise building while Power Girl, Mary Marvel, and Guy Gardner fly towards him. (No Booster Gold.)

Issue Notes: Originally written and promoted in 2004 as the mini-series I Can't Believe It's Not the Justice League, this story was published in 2005 due to conflicting events occurring in the Identity Crisis mini-series. Events in this story must take place prior to Identity Crisis #1 for obvious reasons. Also, events of the Infinite Crisis mini-series have possibly erased some or all of the events in this issue from history.

This story has been reprinted in:
I Can't Believe It's Not The Justice League (2005)

Page 9, panel 1
ALTERNATE REALITY: In much the same manner as Booster Gold saved Captain Atom from Mary Marvel in Formerly Known as the Justice League #4, Booster arrives in the nick of time (overcoming the evil Oberon) to save Fire from Tiffany, an evil, parallel universe version of Ice, with his force field.

Page 9, panel 3
Booster explains to the evil Maxwell Lord that accidentally sending his friends to Hell (in JLA Classified #5) served as notification that his playing the role of a buffoon had gone too far. For the first time in some time, Booster acts truly heroically, saving first Fire then Blue Beetle II from the evil Metamorpho.

Page 11, panel 6
Booster Gold comes face-to-face with his parallel universe, "evil" self. Booster takes the experience as a lesson, learning what could happen to him if he doesn't change his moronic behavior pattern. (During the team's trip to this alternate dimension, only Booster and Mary Marvel meet the alternate versions of themselves, leaving us to speculate what alternate Blue Beetle is like. Perhaps, like Mr. Spock, in the Star Trek episode "Mirror, Mirror," he is similar to the Blue Beetle we know.)

Page 22, panel 1
Following the latest in the series of harrowing ordeals that they call their life, Fire apologizes to Booster Gold for her recent behavior and invites him to dinner. The two have a long history together, first meeting one another off-panel in Justice League International, Vol. 1, #14. Notably, both heroes lost their powers and were relegated temporarily to the sidelines of the Justice League following their beating at the hands of Doomsday in Superman, Vol. 2, #74. Fire's invitation could be the beginning of a romantic relationship, or it could simply be dinner between two old friends with a lot in common.

Page 22, panel 7
BUSTER GOLD: In the final panel of this issue, Blue Beetle and Maxwell Lord are shown side-by-side, joking about Booster's insecurities. (Lord has just revived the "Buster" joke with Sue.) This panel was published after the events of Countdown to Infinite Crisis #1, which would be the final meeting between these two characters.

Boosterrific Review: The most bittersweet of all issues, this comic is as sad as it is hysterical. It becomes clear to the reader by the end of this issue that the creators of the Super Buddies realize that the good times have come to an end. It wasn't just good while it lasted, it was great.