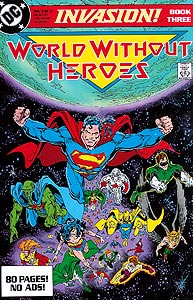 Brief Synopsis: Heroes of the DC universe with active metagenes (the innate natural ability in a percentage of the population responsible for the development of super-powers) are struck down by the detonation of the Dominator Gene Bomb and the remaining heroes of Earth must rush to find a cure.

Issue Notes: This is the second of three books in the Invasion! crossover event.

Page 1, panel 1
At the start of the issue, the Dominators have detonated their Gene Bomb. The bomb is designed to disable the superheroes of Earth in the wake of the failed alien alliance to overthrown the planet. The resulting explosion will cause the powers of human heroes whose special abilities are a result of an active genetic mutation, the so-called "metagene," to lose control of those powers as, in some cases, they surge to dangerous levels. The effects of the detonation of the Gene Bomb are felt throughout the world and will have lasting consequences in the DC Universe. Booster Gold, who derives his super-powers from his advanced technology, is unaffected by the bomb's detonation.

Page 11, panel 3
When Fire and Ice lose control of their powers in the wake of the Gene Bomb's detonation, Booster must save Martian Manhunter from Fire's out-of-control flames.

Page 16, panel 1
Booster and Beetle take the JLI shuttle on a "field trip" to Marineworld, Florida, where they find Animal Man's powers running amok and endangering the lives of all nearby animals. It is not revealed why Beetle is not flying his trademark Bug. Marineworld, a fictional aquatic based tourist attraction, is likely based either on Seaworld or Marineland (or some amalgamation of the two) in Orlando and St. Augustine, Florida, respectively.

Page 16, panel 3
Booster seems determined to work in as many pop-culture references as possible in these panels. There's this overt comparison to Alfred Hitchcock's horror masterpiece...

Page 17, panel 1
...and Excedrin pain reliever's commercial catch phrase ("I've got a headache this big..."). Later Beetle will join in the fun by paraphrasing the lyrics to the theme song for George of the Jungle! Is this a war zone or a comedy show?

Page 17, panel 4
POWER UP: Booster projects his force field to use as an entrapping tractor beam, scooping up the disoriented Animal Man at a safe distance.

Page 34, panel 1
While the chaos in the wake of the Gene Bomb continues, Booster and Beetle are reportedly "battling villains" in New York City. Those villains will turn out to be...

Page 40, panel 6
...Two-Face and Strobe. Booster and Beetle are shown descending from the Bug to attack Batman's oft-nemesis Two-Face and the infrequently encountered Strobe, who has previously combated the Atom. Neither villain has tangled with Booster Gold before.

Boosterrific Review: While the previous issues of this mini-series featured a physical confrontation between the heroes of Earth and the Alien Alliance, this issue takes a more subversive angle as the heroes must come to terms with the unleashing of an otherworldly weapon of mass destruction: the Gene Bomb. This tense story is well told and illustrated, but suffers from some uneven pacing and lacks a satisfying conclusion as it allows the denouement to play out in elsewhere in the DC universe.