Issue Summary: Batgirl, Blue Beetle, Booster Gold, and Harley Quinn arrive just in time to prevent Wally West from killing himself. They discuss what Wally has done then agree to help find a solution to his problems. Reveal Potential Spoilers

Page 6, panel 1
To prevent Flash from killing himself (quite literally — there are two Flashes present, one five days older than the other), Booster Gold crashes the Blue Beetle's Bug airship into them, which would be counterproductive if both Flashes weren't the fastest men alive. Accompanying Booster are Blue Beetle, Batgirl, and Harley Quinn. They will soon be joined by the regrown Poison Ivy.

Page 8, panel 2
While recapping current events, Booster explains that for his last birthday Skeets gave him a "Crappy" gift. Booster begins to say that he went back in time, presumably to tell Skeets to give him a better gift. Skeets is notably absent from this scene, not having appeared since Heroes in Crisis #5.

Page 19, panel 6
SPOILER WARNING!: After Flash admits that he accidentally killed his fellow patients at Sanctuary and then framed Booster and Harley by killing his older self and planting the body, Booster says that no one else has to die. He can solve the problem by going to the 25th century and creating a "speed-clone" of the Flash that they can plant instead. The older Flash knew that Booster would say this, which would means that the Flash corpse discovered in Heroes in Crisis #1 was always the clone planted by Booster Gold and he has always been (unwittingly) complicit in the cover up of the killings. Reveal 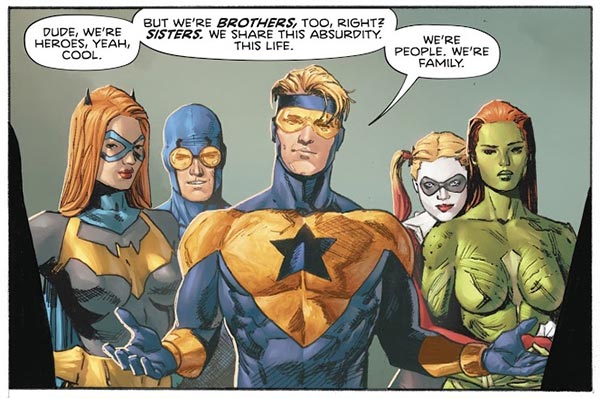 Page 20, panel 2
When asked why he would help Wally atone for his mistakes, Booster explains that all heroes are family. It is a delightfully "love thy neighbor" sentiment, but it rings hollow considering that the murderers Harley Quinn and Poison Ivy are standing behind him.

Boosterrific Review: Talk about going out with a whimper. Even Clay Mann's exquisite landscapes cannot salvage the morass of this story. It ends so abruptly (and unsatisfyingly), I get the impression that even Tom King just wants it to be over.