“Then I Became Superman” 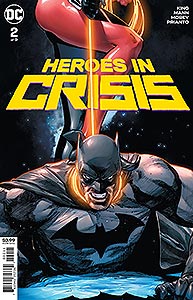 Cover Description: This book has 2 different covers, neither of which includes Booster Gold.

Brief Synopsis: Booster Gold begins his own investigation into the truth of what happened to Sanctuary.

Issue Summary: Batman, Superman, and Wonder Woman conduct an autopsy on Commander Steel and find a set of wind-up chattering teeth in his throat. That evidence leads them to confront Harley Quinn in one of Penguin's safehouses. Harley lifts Wonder Woman's magic lasso and uses it on Batman to steal his kryptonite and keep Superman at bay. Before fleeing, she accuses Booster Gold of committing the Sanctuary massacre.

Elsewhere, Booster Gold has been healed by Skeets and decided to start his own investigation into the real culprit behind the murders. He goes straight to Barry Allen (The Flash), who was unaware that Wally West was among the victims until Booster told him. Barry blames Booster, and attacks him.

Meanwhile, a whistleblower from inside Sanctuary has contacted Lois Lane at the Daily Planet with evidence of the hero testimonials recorded at Sanctuary, testimonials that may reveal all of the heroes greatest secrets.

Page 8, panel 3
POWER UP: When Booster Gold regains consciousness in a field outside Gordon, Nebraska, Skeets explains it used "technology beyond the understanding of this era" to heal the stab wounds Booster received from Harley Quinn in the previous issue.

Page 8, panel 5
POWER UP: Booster recaps the events of Heroes in Crisis #1 for Skeets, mentioning that his force field wasn't working. Is this a clue to what happened at Sanctuary? It is presumably working again, since it appears that Skeets has repaired the damage to Booster's costume.

Booster also repeats his own claim that Harley Quinn is responsible for the massacre at Sanctuary and Harley's counter-accusation that he is the guilty one. If Harley really believed that, why didn't she finish Booster off when she had the opportunity before she departed for Gotham City?

Speaking of Gotham City, how far is it from Gordon? How long has Booster been unconscious if Harley had time to get to Gotham, acquire a safe house from the Penguin, and get a complete change of clothes? Google Maps suggests that Gordon and Gotham are at least 25 hours apart if traveling by car. Gordon doesn't have an airport, but if Harley was able to hitchhike to Chadron, 25 miles away, she could conceivably catch a flight to Gotham by way of Denver. That might take as few as 6 or 7 hours. Either way, that's a long time for Booster to be lying in a field.

Page 11, panel 4
Booster decides that the best way to get to the truth of what happened at Sanctuary is to run his own investigation... because that's what Batman would do.

Page 12, panel 4
Speaking of Batman, he, Superman, and Wonder Woman are indeed running their own investigation. They confront Harley Quinn in her hideout in Gotham City. Harley tells them that "Booster Gold killed everyone." And then she tells them that she killed Booster. Since we know the second statement is false, it makes it harder to believe the first statement.

Page 14, panel 6
Harley Quinn defeats Batman and Superman. (Wonder Woman doesn't get involved in the fight at all.) As Harley flees the scene with a handful of kryptonite, she blames Booster again. Why did Harley need kryptonite? And why is she so intent on pitting the heroes against Booster Gold?

Page 16, panel 1
Booster travels to Central City to seek out the help of The Flash. (Flash was busy fighting a group of Samuroids — robots dressed as Japanese samurai warriors — at the time, but that never takes him long.) In his civilian identity, Barry Allen is a police forensic scientist and therefore would be an ideal ally in investigating a crime. Unfortunately...

Page 16, panel 7
SPOILER WARNING!: ... no one had told Allen that his nephew and sidekick, Wally West, was among the dead. He does not take this news well. Reveal 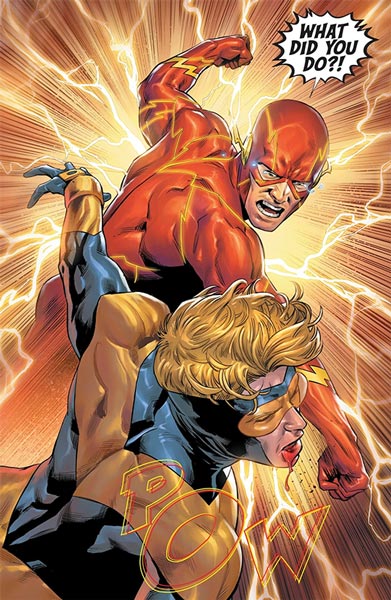 Boosterrific Review: Better than the first issue. Finally, we're starting to get a good view of the story (and the real mystery), although there is still too much unexplained, seemingly out-of-character behavior from established DC heroes for me to be truly enthusiastic. If the path to the solution to this mystery requires Batman, Superman, Wonder Woman — and especially Booster Gold — to act like characters I've never met before, it won't be a very satisfying reveal.