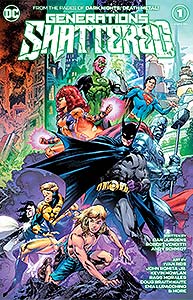 Cover Description: This book has two covers with equal distribution (one by Ivan Reis, Joe Prado, and Hi-Fi; another by Lee Bermejo). Both feature Booster Gold.

Page 4, panel 6
Kamandi, the so-called "Last Boy on Earth" after the Great Disaster ravaged his world, is saved from a gang of bats and a "doom cloud" of "Goneness" by the timely intervention of...

Page 6, panel 1
FASHION ALERT: ...Booster Gold, Time Master. Booster is wearing a similar costume as last seen in Batman Beyond #49, but he is clearly much older. He has a gray beard, uses a cane, and appears to have lost an eye. Skeets has been changed to fit in a gauntlet on Booster's left arm.

Page 7, panel 2
NOT ALTERNATE REALITY?: The last time Booster and Kamandi met was in the artificial environment of Booster Gold: Futures End (2014). In that case, Booster wasn't jumping through time as much as he was jumping through space, across the Multiverse. Here, Booster expressly says that their travel will be through time, meaning that either A) this isn't the Kamandi of Earth-51 (or the Booster Gold of New Earth/Earth Prime) or B) Kamandi's world has been integrated with Booster's world in the aftermath of Rebirth or Death Metal. As a general rule of thumb, it's generally best not to think too hard about these things.

Page 7, panel 5
POWER DOWN: Booster is struck in the shoulder by an arrow. It would seem that he has lost his impenetrable force field.

Page 8, panel 3
Recognizing that time is short and his injury will slow him too much to complete his mission, Booster passes Skeets to Kamandi and sends them to "save time" without him.

Page 8, panel 6
Skeets obediently teleports Kamandi away, leaving Booster to be erased by the approaching Goneness.

Page 10, panel 3
SPOILER WARNING!: Recognizing trouble in the timestream, Waverider arrives in the nick of time to save Booster. Reveal

Page 35, panel 3
Skeets confirms that he is the same entity (though further along in his chronology) as the Skeets first introduced in Booster Gold #1, 1985.

Boosterrific Review: How can I give an 80-page book celebrating 80 years of DC history written by Dan Jurgens starring two versions of Booster Gold (and Skeets!) anything other than five stars? I cannot. Despite its small flaws, it really showcases the depth of material that DC comics have to offer to fans interested in going much, much deeper than any 2-hour movie can ever manage.