Formerly Known as the Justice League

“Deja Vu All Over Again” 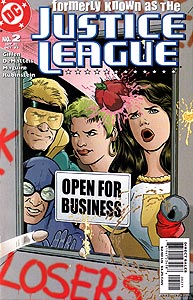 Cover Description: Blue Beetle, Booster Gold, Fire, and Mary Marvel stand behind a window, protected from the eggs and tomatoes thrown their way.

Issue Notes: This mini-series re-unites the characters of the original Justice League International in the hands of the original writers and artists. It was a critical and sales success, spawning a sequel. Events of the Infinite Crisis mini-series have possibly erased some or all of the events in this issue from history.

This story has been reprinted in:
Formerly Known as the Justice League (2004)

Page 9, panel 1
Flying to Queens, New York in Beetle's Bug airship, Blue Beetle II echoes Maxwell Lord's surprise that Booster Gold would marry a 65-year old woman. Since Beetle, Booster Gold's best friend and former business partner, was unaware of Booster's marriage, it is likely that the marriage was a recent development. After all, the two characters appeared together as recently as Superman: Day of Doom #1 in January of this year. (Also, if Booster's wife is 30 years older than he is, and she is 65-years old, then he must be 35.)

Page 9, panel 2
FASHION ALERT: Booster is wearing a facsimile of his original, classic costume. This costume is likely a redesign of his previous Mark XI costume which had already incorporated Booster's 25th-century technology with present-day S.T.A.R. Labs and LexCorp technology. For the sake of clarity, this power suit should be designated the Mark XII "Classic" armor. This Mark XII armor should have all the powers and abilities of Booster's original costume, though apparently without the inclusion of Skeets as in the Mark XI costume. It is somewhat fitting that Booster would return to his classic costume shortly after appearing in a comic book celebrating the ten-year anniversary of the Death of Superman, the storyline that saw the demise of his original costume.

Page 10, panel 2
Beetle's aforementioned heart condition was diagnosed in Birds of Prey #39. His doctor at the time warned him to avoid exerting himself physically. It is medical advice that Beetle has had a hard time adhering to.

Page 10, panel 5
Mary Marvel recognizes Booster Gold. Booster and Mary Marvel likely met during the Sun-Eater's attack on the Earth's sun in the Final Night mini-series. Mary Marvel is Captain Marvel's sister, first appearing alongside the Big Red Cheese in 1942. She has decided to join this group after Captain Marvel, a founding member of Lord's Justice League, has refused to participate.

Page 11, panel 2
In their strip-mall headquarters, Booster and Booster are reintroduced to Captain Atom, Elongated Man, and Fire. The five heroes last appeared together in a battle against Amazo in JLA #27. Captain Atom is concerned over Mary Marvel's belief that he is radioactive. (In fact, Atom is tied into quantum energy, and has to this point in his career not demonstrated any radioactive properties, though his ability to manipulate matter and energy could indeed be used to create radioactive material.) Booster insults Fire's cheese-cake pinup website, blazingfire.com, where she posts pictures of herself in her flame form. (Booster once tricked Fire, a professional model, into posing for a lingerie calendar in Justice League America #67. When she discovered that it was Booster who was producing the calendar, she destroyed the print run. Apparently, her problem was not with the concept, but rather with Booster's involvement.) Also present for this reassembly of former Justice Leaguers is Sue Dibny, Ralph's wife and honorary Leaguer.

Page 11, panel 4
Overseeing the reassembled heroes are Maxwell Lord and L-Ron. L-Ron, having applied for United States citizenship, was previously working in a Big Belly Burger fast food franchise. It remains unclear how L-Ron returned to his cybernetic body, as his consciousness was last seen still possessing Despero's body in Supergirl, Vol. 4, issues 17-18.

Boosterrific Review: The laughs continue as Maxwell Lord tries to rebuild his legacy in the face of some well-educated opposition. Noticeably missing from the early issues of this story is any significant threat facing our heroes. This lack of tension is but a small complaint, and is easy to overlook in the deluge of nonstop jokes.