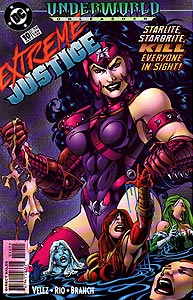 Cover Description: A towering Star Sapphire looms over Crimson Fox, Fire, Ice Maiden, and Maxima, all of whom appear to be drowning. (No Booster Gold.)

Brief Synopsis: The pending nuptials between Captain Atom and Plastique lead towards a confrontation with Star Sapphire.

Issue Summary: The Extreme Justice team investigates the spaceship that crash landed in the Kiscogee Desert in Arizona. In order to further the investigation, they tow it to their Mount Thunder, Nevada, headquarters.

A week later, the team has a meeting about their operations and mandate. Booster Gold volunteers to fund the team with proceeds from his business, Lightspeed Entertainment. Following the meeting Captain Atom asks Maxima to plan for Plastique's wedding shower.

One month later, Carol Ferris is hired as the Mount Thunder facilities manager. In the Deep Room, Blue Beetle, Booster Gold and Firestorm conduct a training exercise. Booster takes out his growing frustration on Firestorm.

The next day is Plastique's wedding shower, and Plastique's old compatriots Lashina and Molly have been invited, as well as Carol Ferris and Justice Leaguers Fire and Ice Maiden. The party is crashed by Neron and Star Sapphire.

Issue Notes: This issue is a tie-in with the Underworld Unleashed mini-series.

Page 3, panel 5
FASHION ALERT: As Beetle studies the design and construction of the newfound spacecraft, a new suit of armor for Booster Gold is visible on a computer monitor behind him. This armor is strongly based on Booster's classic suit, though with slightly more bulk.

Page 6, panel 3
Booster Gold attends a team luncheon with his teammates and Plastique. This is Booster's first meeting with Plastique, a former for of Firestorm's and Captain Atom's fiance. 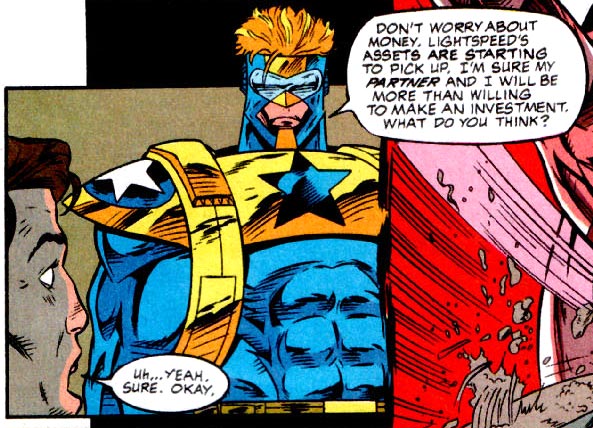 Page 7, panel 3
At a meeting to discuss the running of their team, Booster volunteers to "invest" some of the assets of Lightspeed Entertainment in Captain Atom's Justice League. This is the first time that Booster has had operational control of any team that he has belonged to. His previous Justice League teams were funded by Maxwell Lord or the United Nations, and the Conglomerate was funded by several of the biggest businesses in the DC Universe.

Page 8, panel 1
When Beetle tells Booster that he may have a way to "solve all your problems," Booster remains uncharacteristically pessimistic. Booster no doubt remains bitter about Beetle's friendship with Firestorm.

Page 9, panel 1
Appearance of Carol Ferris, President of Ferris Aircraft. Despite the fact that Ferris Aircraft was once a backer of Booster Gold's Conglomerate and will now be running operations at Mount Thunder, she and Booster have never to this point appeared on-panel together.

Page 12, panel 4
Tired of Firestorm's taunting (including challenging his football skills and his humanity while trapped inside his armor) during a training exercise, Booster attacks Firestorm with unnecessary force and quits the exercise, leaving Blue Beetle and Firestorm alone.

Boosterrific Review: Few tie-in stories for the "Underworld Unleashed" event manage to evoke the gut-wrenching disgust and horror that this issue produces when its seemingly endless cheesecake pin-up poses dissolves into a disturbing ending involving what seems to be a sword-wielding fetus. This comic series continues to provide fine characterization for some familiar DC Universe faces coupled with disappointing art.