Cover Description: This issue has multiple covers. Booster Gold appears on none of them.

Issue Notes: This series takes place on Earth-63 in the Multiverse born from Dark Crisis.

Page 2, panel 2
Having somehow survived the events of the previous issue, Booster Gold joins Deathstroke, Mary Marvel, and Midnighter on a bus to Central City. 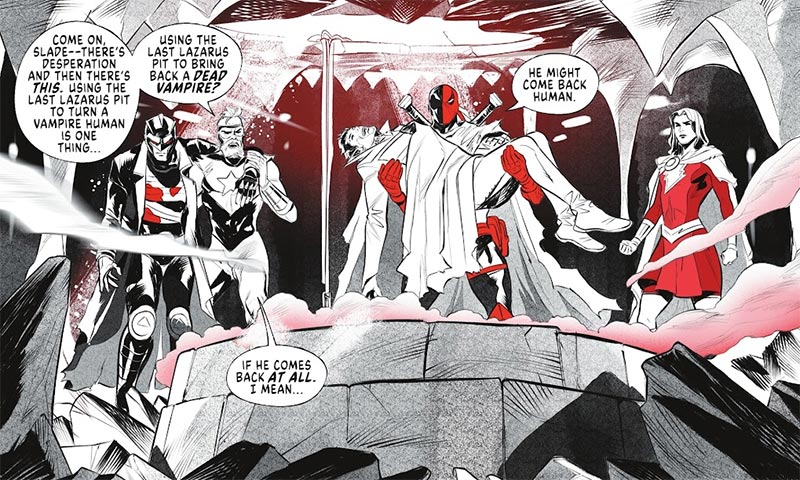 Page 10, panel 1
Deathstroke is criticized after the Weather Wizard's resurrection goes poorly. In Deathstroke's defense, a Lazarus Pit worked to resurrect a vampire into a human in DC Vs. Vampire: All-Out War #1, so there was no reason to suspect it wouldn't work here. (Of course, the character resurrected in issue #1 chose to be a vampire again in issue #4, but that wasn't the Lazarus Pit's fault.)

Page 11, panel 3
POWER UP: Booster somehow "stop[s] the bleeding" from the wound in Deathstroke's neck without sealing it. Like everything else in this book, this use of Booster's powers makes no sense. He could be using his Booster Shot energy rays to cauterize the wound closed, but following panels in which Mary Marvel closes the wound with a magic sword (that the art implies she pulls from her butt) make it clear this isn't what Booster is doing. Is he projecting a force field small enough to put pressure on the neck? Is he punching the blood back in? In the land of vampires, resurrection pits, and holy butt swords, anything goes.

Page 21, panel 3
Booster laments that Mary Marvel has to fight her brother, repeating the line, "she's his sister." Is this a reference to Booster's own twin sister, Michelle — is Goldstar a vampire in this timeline? Or perhaps this is intended as a callback to the Wonder Twin Zayna, who was the first to call the alarm about the mysterious death of her brother in DC Vs. Vampires #2?

Page 22, panel 5
Nope, neither of those things. Booster's dialogue is only a foreshadowing of vampire Mary's fratricide.

Boosterrific Review: Congratulations to the entire creative staff for finding new ways to make each issue of this series worse than the one before it.