Cover Description: Booster Gold and Skeets float outside a Time Sphere with the 25th century visible in the background.

Brief Synopsis: Booster Gold travels back in time to ensure the destruction of Coast City.

Page 1, panel 1
Booster Gold and Skeets are flying, presumably over United States airspace, probably in the state of Florida, as the events of the previous issue concluded "a few minutes ago"

Page 4, panel 1
SPOILER WARNING!: Beginning in Superman, Volume 2, #78, Hank Henshaw was one of four men who began masquerading as Superman following Superman's apparent death at the hands of Doomsday. At the time in the "Reign of the Supermen!" storyline, it was widely believed within the DCU that Henshaw, known widely as Cyborg Superman, was actually Superman, resurrected through the use of advanced Kryptonian technology. Reveal

Page 7, panel 5
Despite Booster's protestations, he shares Hunter's philosophy regarding time maintenance, or he wouldn't perform his role as time policeman. Hunter is concerned with the natural maintenance of the Space-Time Continuum, which he philosophically defines as a fragile fabric that must be defended from manipulation by self-serving individuals. How Hunter comes to this rational decision or why he has appointed himself as time's guardian is never well explained, but there have been innumerable examples throughout the new DC 52-verse indicating that his fears are relevant and his job is necessary. Note that it is unlikely that Hunter's philosophy allows for the existence of Free Will, as he is privy to the knowledge of time from beginning to end. (A further discussion on the philosophies of time in the DCU can be found here.)

Page 9, panel 4
Kids, when Michelle Carter mentions a "payphone," she is talking about a publicly accessible coin-operated telephone. Prior to the widespread popularity of cellular phones in the early 21st century, they were a common sight in developed population areas. You don't see them much anymore.

Page 10, panel 1
There is no evidence in Booster Gold's adventures to date of Booster having ever visited Coast City prior to its destruction. His first known trip to Coast City was in Green Lantern, Volume 3, #81.

Page 11, panel 1
The "Federal Emergency Contact Line" in this case presumably connects to the Federal Bureau of Investigation (FBI), which handles potential terrorist investigations within the United States. While the FBI does have a national hotline for reporting "major cases," they recommend contacting local offices whenever possible. The closest FBI Offices to Coast City, California would be the office in the state capital, Sacramento.

Page 12, panel 1
For the second time, Booster Gold comes face to face with the mysterious Project Slipshift agent. And he calls her "Sweet cheeks." 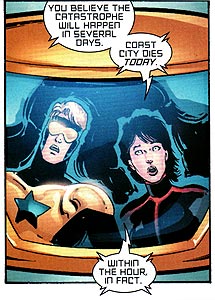 Page 14, panel 6
According to Skeets, the events of this issue are concurrent with the events previously depicted in 1993's Superman, Volume 2, #80, written and drawn by none other than Dan Jurgens.

Page 15, panel 4
Booster compares the destruction of Coast City and its 7 million inhabitants to several other major catastrophes:

Page 18, panel 3
According to the American Cancer Society, Cancer was known to be curable via operation by the middle of the 18th century. Chemotherapy wasn't discovered until the mid-20th century.

Boosterrific Review: This is an engaging issue that relies heavily on long-established DC continuity for dramatic tension. Because Michelle Carter has never been firmly established as a character, it is easy to believe that the destruction of Coast City may be her destruction as well. After all, an alien invasion and potential destruction of a major metropolis were both key elements in her first "death" back in Booster Gold, Volume 1, #22.

(2 votes)
Harry (Feb. 13, 2010, 22:02:03)
A build up issue. If the payoff next issue is worth the build up, then this issue will be viewed more favorably. Would have been a great time for the back-up feature to provide dramatic payoff that was missing in the main story... but the Blue Beetle story fell flat to me.
KMD (Feb. 11, 2010, 09:49:34)
An alright issue with some fun conversation between Cpt. Crain and Booster. While the tension builds in the issue, not much actually happens. The scenes with Michelle do nothing to help the issue.