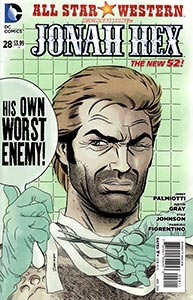 Cover Description: Jonah Hex looks at his newly repaired face in a mirror. (No Booster Gold.)

Brief Synopsis: Jonah Hex recovers from an automobile accident to find that his face has been surgically repaired.

Issue Summary: Over a period of months, Gina Green visits Metropolis General Hosptital where Jonah Hex lies in a coma following an automobile accident. Gina makes friends with the hospital staff and even meets with her father. She never waivers in her devotion to Hex.

Eventually, Hex wakes up to find that the doctors have surgically repaired his face. He helps the police subdue an unruly patient, and relaxes with a cigarette.

When Hex is discharged from the hospital, he is met by Booster Gold, who has come to return him to his proper place and time in the 19th century. Gina refuses to let Hex go without her, so Booster agrees to transport her, too.

Hex is disappointed to learn that Booster has teleported him so far from shelter. Things get worse when he is approached by Gray bear and his tribe of angry Apache Indians.

Issue Notes: This issue credits its illustrations to "artists" Staz Johnson and Fabrizio Fiorentino. According to the website of Staz Johnson (stazjohnson.blogspot.com), Johnson provided pencils and inks for the first 12 pages with Fiorentino working on the rest. Because Booster Gold does not appear in the book before page 15, Johnson is not listed here as an artist.

Story Notes: Although Booster Gold most likely experienced the events of Convergence before he appears in this issue, this issue was published over a year prior to Convergence. Chronologically, this was Booster's first published appearance in the DCnU since All-Star Western #21 seven months earlier, and would be the last issue to feature Booster until Booster Gold: Futures End, seven months later.

Page 15, panel 1
FASHION ALERT: Booster Gold has returned to Metropolis General Hospital (where he was himself a patient in Booster Gold, Volume 1, #13) to restore Jonah Hex to the 19th century. In the aftermath of Convergence, Booster has regained his memory and his job as Time Master. He has also changed his costume to resemble his pre-Flashpoint design, most obviously returning to his gold pants. In fact, the only aspect of Booster's New 52 costume still intact is the unusual gauntlets and the bands under the arms... 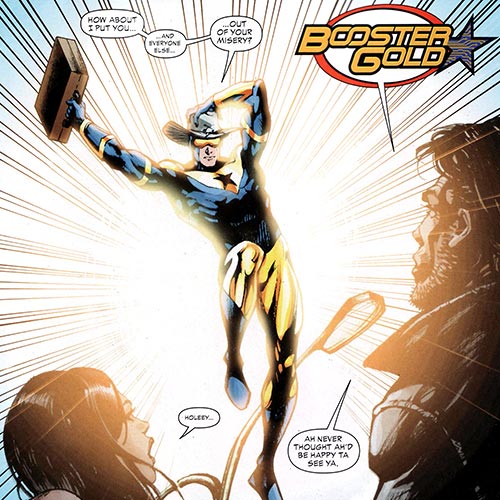 Page 16, panel 1
FASHION ALERT: ...lines which have disappeared by the next panel. This issue credits two artists, and it is unclear whether these reversions to Booster's older costume are intentional or a side effect of rushed art from an artist unfamiliar with the character's New 52 style.

Page 16, panel 2
Hex responds to Booster's apology by punching Booster in the face. These two were fighting when they last parted (in All-Star Western, Volume 3, #21), so Hex is really picking up where he left off.

Page 16, panel 5
Booster has brought Hex an authentic Confederate States military uniform direct from a nineteenth-century Confederate armory (including a cadet gray slouch hat with a golden Cavalry officer's cord he gave Hex in a previous panel), just as Hex wore in the Old West. Booster implies that he is trying to preserve history in his role as time policeman...

Page 17, panel 4
It's true that "the average person only lived to be forty" in late nineteenth century America. However, that number includes the high infant mortality rate. Someone who had already reached her 20s would be much more likely to live into her 60s.

Page 17, panel 5
SPOILER WARNING!: ...but then he agrees to send 21st-century Gina Green back in time to the 19th-century with Jonah Hex. What good is being a time cop if you can't break a few rules? Reveal

Page 17, panel 6
POWER UP: Booster sends Hex back in time without traveling himself. This is not something that Booster used to be able to do. Booster has been busy since we last saw him.

Boosterrific Review: The story is slow and feels mostly like epilogue and exposition for other stories (in no small part because of the disconnect between the style of the issue's two artists). However, there are plenty of nice character moments that make it an enjoyable read for fans of either Hex or Booster Gold.