“Looking Back at Tomorrow” 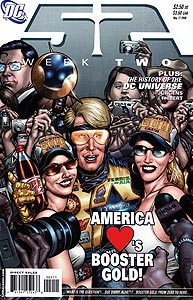 Cover Description: With a beautiful girl on each arm, Booster Gold is surrounded by the media and cameras as Skeets I (erroneously appearing in place of Skeets II) and Clark Kent look on. Booster wears a racing jacket covered with sponsors and holds aloft a promotional bottle of soda.

Brief Synopsis: The heroes of the DC Universe face a new series of unexpected mysteries.

Page 2, panel 2
PRODUCT PLACEMENT: The groundskeeper at the cemetery where Sue Dibny has been buried is wearing a Booster Gear jacket and an OPrK t-shirt, both apparel products endorsed by Booster Gold.

Page 4, panel 2
"Week 2, Day 1." Booster Gold has brought Skeets II to Will Magnus, "the 21st century's foremost authority on android A.I.," in order to investigate and hopefully repair the malfunction Skeets experienced two days prior in the previous issue. Magnus describes Skeets as a "self-repairing valet module." Skeets was previously identified as a "BX9 Security 'Bot," though that was before his recent rebirth following Booster's latest trip back to the future in Infinite Crisis. Booster holds the inert head of Platinum, the female member of Magnus' famed Metal Men, while an also inert Iron lies nearby.

Page 4, panel 4
PRODUCT PLACEMENT: It would seem that Booster spent the intervening time since his last appearance signing new sponsors. His uniform now features an advertisement for the unknown companies Star Burger (difficult to make out until future issues) and OPrK (which is presumably a clothing brand similar to DKNY). Added to the back of his costume since his last appearance are the slogans "Super Size Mi" and "Just Made It," word plays on slogans used by McDonalds restaurants and Nike shoes.

Page 12, panel 2
MEET THE PRESS: "Week 2, Day 4." Booster Gold departs from an apparent interview with Jimmy Olsen and others on the roof of the Daily Planet Building in order to intercept a damaged airliner, Ferris Air Flight 2824. Skeets announces that "this looks like a job for Booster Gold," his second reference to familiar Superman slogans in as many issues.

Page 13, panel 4
POWER UP: Skeets utilizes a previously unrevealed appendage to open the falling plane's landing gear. This is the first time that any version of Skeets has demonstrated a functional appendage of any sort.

Page 14, panel 5
BOOSTERRIFIC! COUNT: 8. This is the first time that Booster's personal catchphrase has been uttered on-panel by anyone since Millennium #7 in 1988. If Booster wasn't so irritated by the near bungling of the rescue of Flight 2824, he would probably be very pleased that it was suggested by a member of the press as a headline.

Boosterrific Review: The rebirth of Booster Gold continues. (Worth purchasing for the cover alone.) Another great read that manages to continue to establish the soap opera style of the series while simultaneously being able to stand alone. Well done by everyone involved.