My list of the twelve best Booster Gold comics is presented in chronological order of publication. Otherwise, entry number 8 would have appeared much higher.

May I present to you the glory that is 52 Week Fifteen, the "Booster Gold Memorial Issue" and one of the earliest inspirations for what would become Boosterrific.com.

For most of the early 2000s, Booster Gold was an afterthought, a wash-up has-been of a hero out of the public eye. His time in the shadows was preparing him for a new turn in the spotlight. But before Booster could soar, he had to fall. When Booster Gold does something, he doesn't settle for half measures. 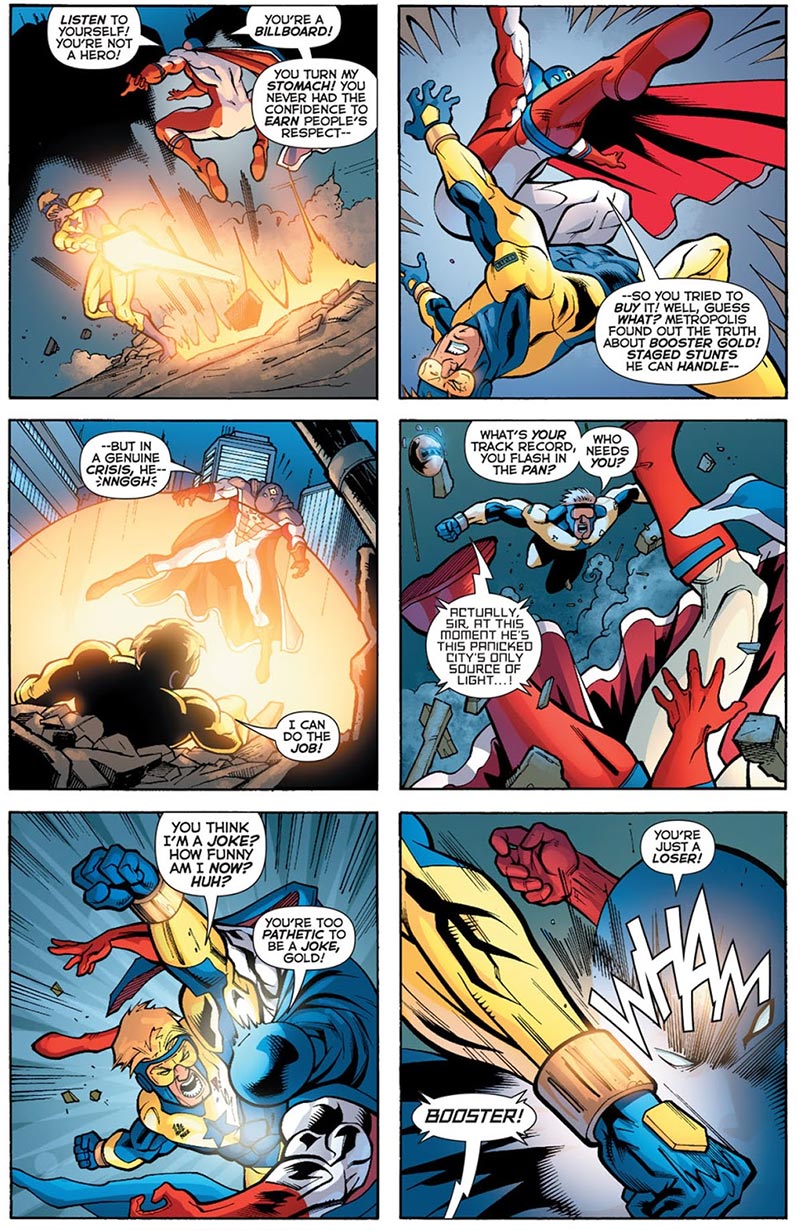 If I didn't know better, I'd say don't be so hard on yourself, Booster. But this is only the first level of the inception.

Re-reading those panels once you learn who's wearing the Supernova costume and why, you'll start to see the play within the play. (Booster Gold as a Shakespearean tragic hero? Yes, please!) Who can't respect a character who is willing to go that far to save his friends?

I'm hesitant to say too much, as the Booster Gold story running throughout the ensemble series is as much a mystery as it is a tale of redemption. If you've never read 52 cover to cover, do yourself the favor of correcting that mistake. With all due credit to every writer, artist, and editor involved (including Dan DiDio), I say that 52 is about as great as long form American super hero comics storytelling can get.

And issue 15 is particularly good, certainly good enough to be included among the twelve best Booster Gold comics.

BoosterCola posted on Aug. 17, 2020 at 4:34 PM
52 is still one of my favorite comic book story lines! It gives so much development to Booster Gold as a character and his possibility as a hero!

Booster boosters know that much of Booster's origin was based on elements of Superman's Silver Age continuity (as covered on several pages of this site, including the Boosterrific! Blog post from December 4, 2015. But just because Booster became a successful hero in his own right didn't mean he was done "borrowing" from costumes and powers from Superman 's history.

Introduced in 52 Week 8 (2006), mysterious Metropolis hero Supernova's secret identity stumped even veteran reporter Clark Kent. Few at the time guessed that underneath his mask, Supernova was really the disgraced hero Booster Gold using the powers of flight and teleportation.

How did he do it? His teleportation was a clever manipulation of the Kryptonian Phantom Zone projector technology invented by Jor-El, Superman's father (first seen in Adventure Comics #283, 1961). And he flew by way of Booster's own 30th-century Legion Flight Ring, which in pre-Crisis on Infinite Earths continuity had originally been Superboy's (first seen in Adventure Comics #329, 1965).

The best part is even the concept of Supernova as one-hero-disguised-as-another was a nod to something Superman once did.

First seen in World's Finest Comics #178, 1968, the "Nova" persona was adopted by Superman as a way to continue fighting crime following an unfortunate encounter with an alien invader that left him powerless.

Nova used Batman's utility belt as his inspiration to create a costume with its own powers. Amusingly enough, this included a cape created by Leonardo da Vinci that Superman had picked up during an earlier time-traveling adventure. (In fact, Superman and Leonardo da Vinci had worked together as recently as the previous issue!)

The Nova personality was used only for a few misadventures, including a villainous turn against Batman and the triumphant defeat of a criminal mastermind. The costume was eventually shelved as Superman returned to his former costumed identity.

Every Nova adventure took place in one of DC's infamous "imaginary" stories, but that doesn't make them any less influential. Booster Gold may be a thief, but at least he steals from the World's Finest!

Cort posted on Jul. 1, 2019 at 1:29 PM
This is why I come to this website. The great deep dives into lore and Booster comics history like this. I had no idea about Nova from the silver age like this. What wacky fun.

The life of any comic book hero would be a lonely one if not for the many characters who have made up their supporting cast. Just as Superman has Lois Lane and Batman has Alfred, Booster Gold has also shared his adventures with quite a few people over the years. Today we look at one of those, Daniel Carter.

After a gruesome injury ruined his promising football career, Daniel Carter had became stuck in an unfulfilling job as Evergreen Insurance Company's fifth-best term-life salesman. He dreamed of being a super hero and reclaiming his lost glory. Perhaps it was that dream — or maybe it was fate — that lured him to Booster Gold's sparsely attended funeral in 52 #18.

Daniel was completely unaware that Michael Jon "Booster Gold" Carter was his descendant until Skeets told him the truth. Unfortunately for Daniel, that was the only truth Skeets told him (52 #19).

Skeets wasn't Skeets at all, but the villainous Mr. Mind in disguise. Fortunately for Daniel, Rip Hunter was already aware of Mr. Mind's schemes. Hunter enlisted Daniel to become the second Carter to don the mask of Supernova, world-famous super hero. Together with faked-his-own-death Booster Gold, Daniel defeated Mr. Mind and saved the multiverse (52 #52). Daniel Carter's dreams had come true!

Afterwards, Booster and Daniel became roommates (Booster Gold Volume 2, #1). Though Daniel meant well, he was also rather stupid. He was often left behind while Booster was out adventuring. This made it easy for Booster's ne'er-do-well father to steal the Supernova costume and use it for evil (Booster Gold Volume 2, #2). It would also present the opportunity for Daniel to meet his future wife, reporter Rose Levin, when she came snooping into Booster Gold's personal life (Booster Gold, Volume 2, #3).

Rip Hunter would eventually recover the Supernova costume, and Daniel would continue to play the role of hero for Rose. He traveled through time to find his wife the perfect gift — and only accidentally gave longtime Justice League foe Starro the Conqueror the ability to conquer all history (Booster Gold, Volume 2, #13). He would redeem himself by protecting Rose from a maurading Black Lantern Blue Beetle in Booster Gold, Volume 2, #27.

Supernova hasn't been seen since Flashpoint, but so long as Booster Gold is still around, Daniel and Rose have to be out there somewhere.

Salesman of the Future 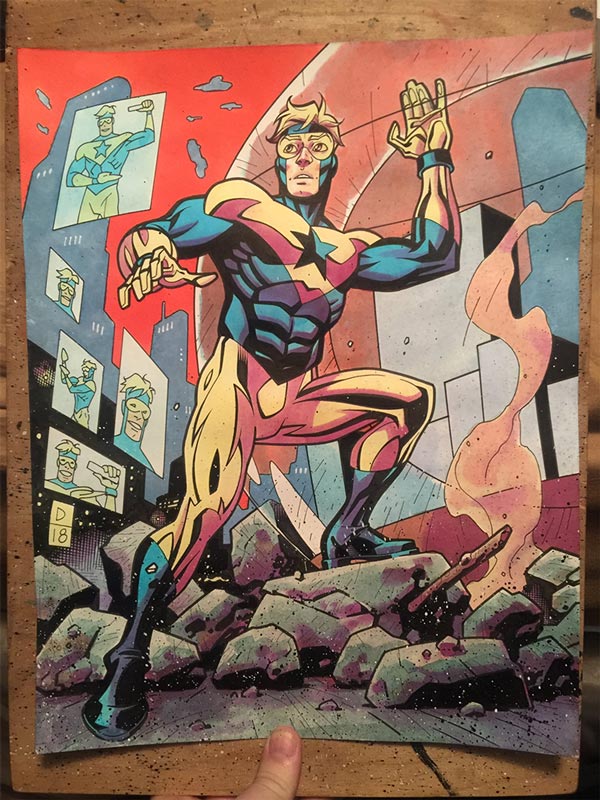 Donovan posted this recent commission on Twitter as @DerecDonovan74. If you like what you see, you might want to know that he's still taking orders for Christmas commissions through December 15.