My friends Mike and Keith are big fans of "The Dresden Files" books by Jim Butcher, and they were eager to tell me that Booster Gold is name-checked in the latest book, Battle Ground, as you can see below. 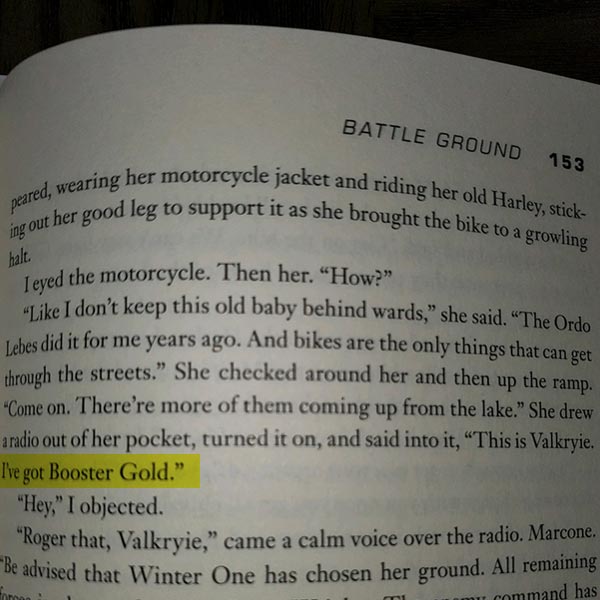 That page makes no sense to me, but I suppose jumping into any novel on page 153 would be confusing.

Despite my friends' urging, I have not read any of "The Dresden Files" books. I bought the first one, Storm Front, but only got through the first chapter before loaning it to my father, who was looking for something new to read in the hospital. I haven't seen it since (though Dad has now read the first 16 in the series).

Apparently, fans of the series know what I didn't, that protagonist wizard Harry Dresden — as Wikipedia tells us:

Harry prefers to drive his Volkswagen Beetle because the simple technology powering it makes it less likely to be adversely affected by his magic, and it can be fixed easily. He refers to it as the "Blue Beetle" due to its original color, though damage by supernatural creatures has forced him to replace several pieces of the bodywork in different colors.

Despite Harry's objection, comic book fans will agree that "Booster Gold" is the prefect callsign for someone associated with the Blue Beetle.

For the record, Battle Ground, the 17th "Dresden" book, was released in September. It can now be found in fine bookstores everywhere (and I'm sure it will make a good gift for my father this Christmas).

ithildyn posted on Nov. 30, 2020 at 1:52 PM
Oh hey I've read the series up until Peace Talk (the book right prior) and so was aware of the vehicular Blue Beetle, but now this new reference is making me extra delighted!

Kevin posted on Nov. 30, 2020 at 9:08 PM
I know nothing about the Dresden Files. Are the books episodic or do I need to read the other books to know what's going on?

Cort posted on Dec. 3, 2020 at 12:14 AM
This is awesome, been waiting for the new book to drop. Dresden File is something I started reading in 2000-2001. Has been a fun series to read when they come out. And its even better now that it has a Booster Gold reference. The Blue Beetle and other comic nods were always fun.

ithildyn posted on Dec. 21, 2020 at 7:02 PM
@Kevin (super late sorry, you probably won't see this) It's not episodic, no, though you could pick one of the maybe first 3-4 novels without having read the others. But it's been what, a dozen+ now, so yeah it's gotten quite the storyline. That being said, the first book can be read as a standalone since Jim Butcher wasn't sure if his "Private Eye/Wizard Urban Fantasy" shtick would work out (he kinda wrote it at first to be contrarian against his editor, haha). There are also a bunch of short stories he wrote over the years that can be a good "appetizer" to see if you might like the main course. Some are gathered in antologies along with stories of multiple authors, and some are collected into a complete book format.

Also, I need to mention I happen not to have read the series per se : I listened to the audiobook version (motion sickness + long commutes pre-COVID made those a godsend). The narrator on these honestly does a real good job, I feel it actually adds to the story.