My Name Is Booster Gold and I'm Here to Say...

Sometimes I need a reminder that the world is full of creative people doing good things, and that's what Ithildyn gave us this weekend. Specifically, we got a link to this video:

I've never been any good at rhythm games (I have two left thumbs), so I'm content to watch the video. If you're the sort who's into playing such things, there are resource links in the video description.

UPDATE 2021-04-15: Mod creator CosmicBeetle dropped by the comments with a link to the official trailer (also viewable on YouTube), so I've removed the gameplay video I'd originally embedded above. Sorry about that, CB. You've done good work.

CosmicBeetle posted on Apr. 15, 2021 at 1:38 AM
UM, HI, this is my mod. I appreciate that you liked it,tho i'd rather you post the "official" mod trailer instead of some random person's video. those videos are makin me real nervous. anyway here it is: https://youtu.be/suASS4WEXt0
also, if anyone is interested, my twitter is @Cosmic_Beetle
i'm actually working on Week 6 now, theres a clip of it there

No Booster Gold? No Way

DC Comics has taken the unusual tact of pitting its potential audience against itself in whittling down pitches for upcoming books with its current "Round Robin" tournament.

If you are unaware, DC has revealed 16 different comic book concepts by 16 different art teams. These concepts were set in paired brackets, and fans are asked to vote for their favorite in each pairing. After four rounds, the winning pitch is promised a series. There's one big problem with this plan:

None of these concepts include Booster Gold.

One round has already been completed. You can find details and concept art for the potential books still in the tournament at community.dcuniverseinfinite.com.

Go ahead and vote for the ones you like. (The Jaime Reyes Blue Beetle soldiers on, but Justice League Pets has already been eliminated, and I can't bring myself to care about the rest.) I offer my congratulations to whoever wins. But don't be surprised if I keep a firm hold on my purse strings until such time as Booster Gold reappears in the DC Universe.

If it might cheer you up somehow, a dedicated soul made an mod to re-skin a rythm game called Friday Night Funkin with Blue & Gold (and friends)!
Have a look-see: https://youtu.be/rRlM-f2de_0

There are a lot of cameos in the background of some levels! See who you can spot! :)

DC released barely any new comics this week, at least none with Booster Gold in them. However, they did re-release a collected edition of their 1996 four-issue event mini-series, Final Night.

In this story, the star-devouring Sun Eater has devoured Earth's star, and the heroes of the DC Universe do what they can to prevent the complete collapse of civilization. It's kind of a dark story.

If you weren't around to read it the first time around, here's Booster Gold's entire contribution to the event: 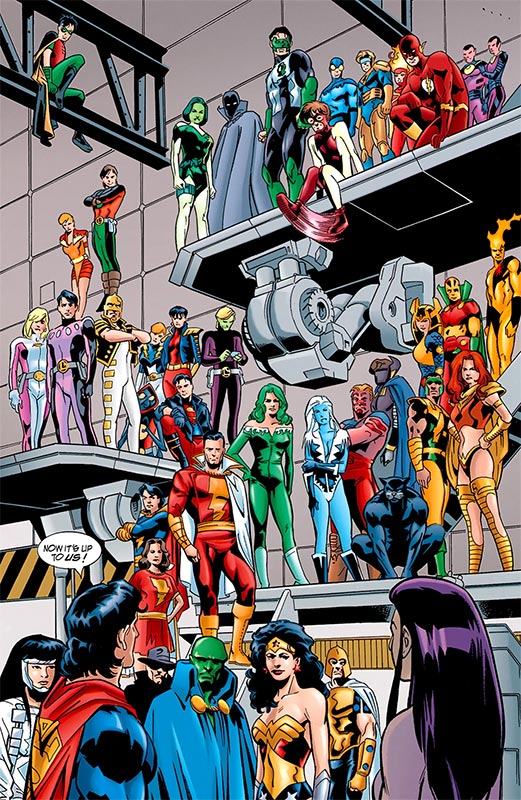 And that's it. Not even a line of dialogue! The "Extreme Justice"-era was a lean time for our hero. (I'm sure he was very busy behind the scenes.)

Booster Gold's involvement aside, the mini-series is better known as the first step on the road to redeeming fallen hero Hal Jordan. It's also the event that kick-starts the infamous electric Superman Red/Superman Blue era. (Is it just a coincidence this collection is being released a week before DC launches the new Superman: Red and Blue title next week? I think not!)

It's not a bad story, and if you're not familiar, give it a look. At the very least, you're going to want to know what "really" happened before you read the inevitable Tales of the Dark Multiverse version.

The future is here! 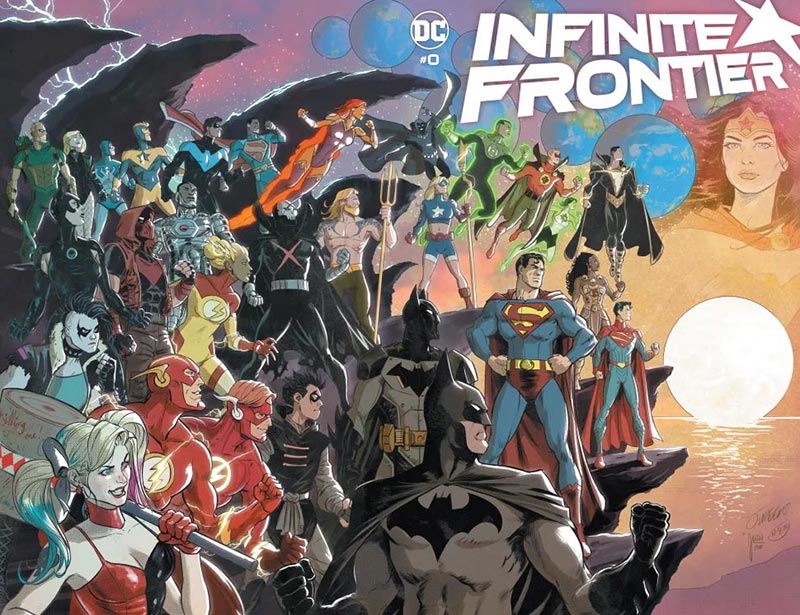 If Booster Gold's appearance on Dan Jurgens' cover of this week's Infinite Frontier #0 wasn't enough to get you to buy the issue, how about if I tell you that our hero also makes a surprise cameo appearance on the pages within? 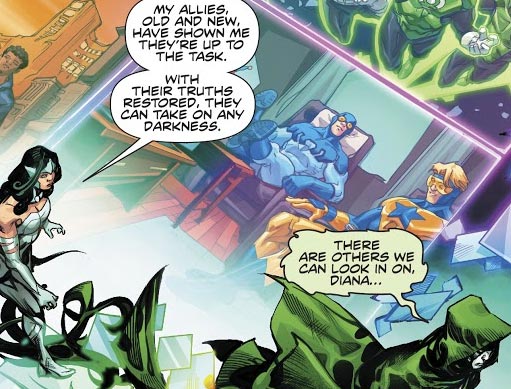 Sadly, that is the totality of Booster's participation in this issue. Still, that's an infinite amount more Booster than most of the other books on the shelves of your Local Comic Shop.

Buy this issue (for that sweet cover) and make Skeets happy.

Cort posted on Mar. 3, 2021 at 7:19 PM
Well considering a lot of the other pictures in that spread are for upcoming titles, some of the images directly (like for Supergirl) or some hinted at like the known Crush & Lobo book, this could be good news. A Blue and Gold book could be just around the corner!

Boosterrific [Official Comment] posted on Mar. 4, 2021 at 12:38 AM
I wish I was feeling as optimistic. Maybe I'm suffering from reboot fatigue.

Kevin posted on Mar. 6, 2021 at 11:35 PM
I think Skeets hacked the computer at my local comic shop. I went in to buy Generations Forged and somehow Infinite Frontier was added to my pull order.

Boosterrific [Official Comment] posted on Mar. 7, 2021 at 1:56 AM
Like any good sidekick, Skeets has your back, Kevin.