Booster's just being coy. I'm sure he'd gladly campaign for whomever offered him a Cabinet position.

Meanwhile, I stayed up too late watching election returns, and all I did was damage my emotional health. I'm going back to sleep. Wake me when it's finally over.

Last week, I mentioned as one of the reasons that I still liked single-issue floppies was in large part because I love the cover art. That conditioning led me to do something yesterday that I almost never do: I paid far more than cover price just to buy a variant cover, and it doesn't have anything to do with Booster Gold. 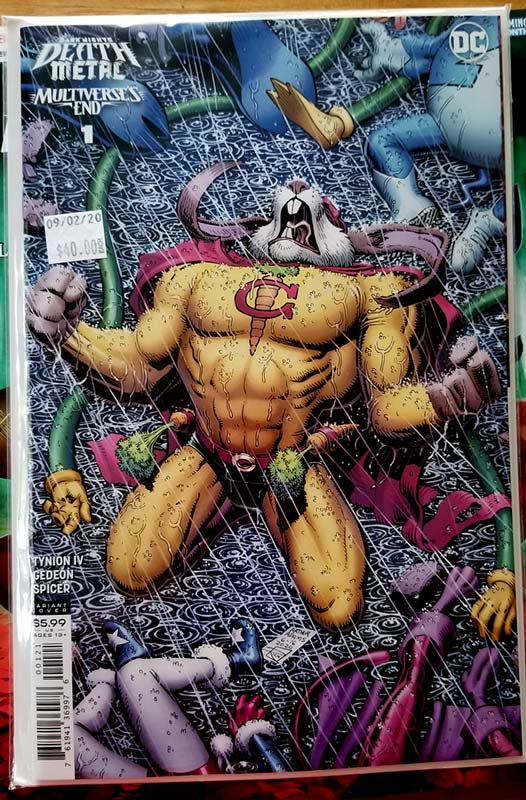 As satisfied as I am to have an Art Adams-drawn Captain Carrot cover (and I consider $40 a small price to pay against the amount I would have paid over the past 3 decades if DC had chosen to give me any ongoing Zoo Crew comics), I do have to admit that the Booster Gold trades were money better spent.

You can still get both Booster Gold: The Big Fall and Booster Gold: Future Lost at Amazon.com (and maybe a Local Comic Shop near you).

Until the Heat Death of the DC Universe

Some time back, Drake tweeted:

I can speak only for myself, but I *do* still love floppies, largely because in my mind, that's what a comic book *is*.

I agree that the writing is on the wall for single issue floppies and that the future of the comics lies in an inevitable shift to more consumer-friendly mass market trade collections. However, once upon a time, buying single issues at a newsstand was the only way to follow the adventures of your favorite hero. You were soon conditioned that if you missed an issue, there wasn't going to be a second chance. If you wanted to read comics, a weekly trip to the store was the only way to do it.

For example, Booster Gold Volume 1, first released in 1986, was out of print for decades, and children of the 80s had no reason to believe it ever would be seen again. A full-color reprint only arrived in the past year, and I just got my hand on the second half, Booster Gold: Future Lost, last week. 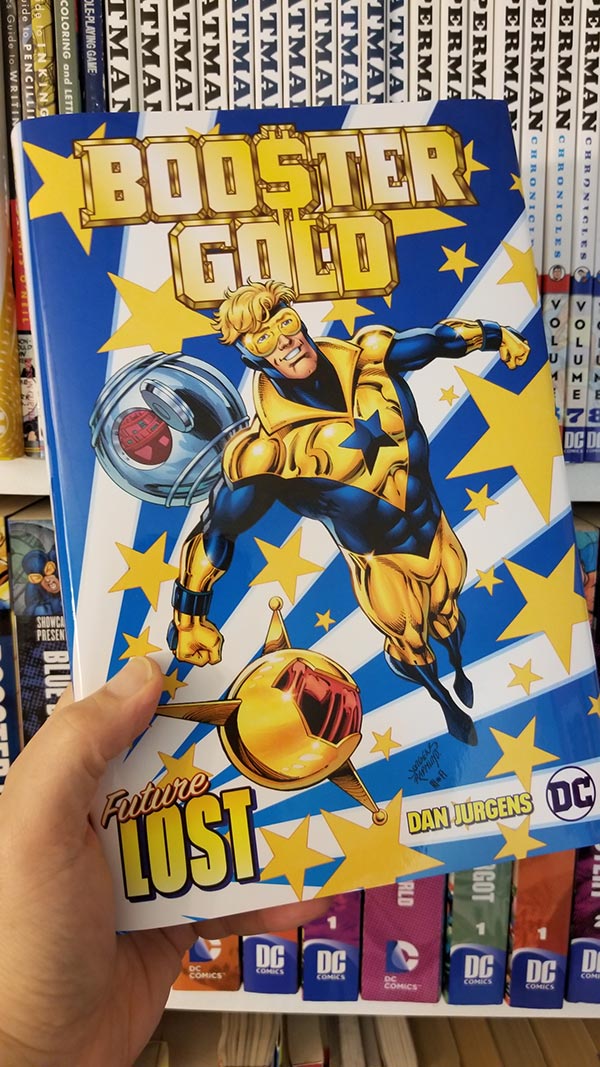 Now available at a fine retailer near you!

Comic book retailing has changed a lot since your drugstore's spinner rack, but until the publishers finally throw in the towel, I think I'll stick to my singles. It may be more expensive, more labor intensive, and more often than not, an inferior reading experience, but at least I still get to look at all that great comic cover art.

No matter what anyone else tells you, we do buy them for the pictures.

I remember a time when single issues had enough content and the reader was satisfied after reading them. Each issue had a complete story in it even when that issue was part of a bigger arc.

I think the problem is not the format; instead, the problem is the content. Today comics can be read in 5 minutes and you reach the final page with the feeling that you paid a lot of many for a very minor section of a story. 6 issues arcs todays tell the same amount of story that 1 or 2 issues 20/30 years ago.

So, you can "chew" a lot if you read comics from the 70s and 80s and 90s. The single issue format is not the problem. The Claremont, Cockrum and Byrne Uncanny X-men shattered the comic book industry and the periodicity was bi-monthly (each issue was two months apart).

So, I don't blame single issues. I blame lazy writers and artists.

Boosterrific [Official Comment] posted on Sep. 28, 2020 at 3:02 PM
Great points, Ariel. We call that thinning of content "decompression," and it's been a problem for most of the 21st century. There's a great discussion of the problem here: http://absorbascon.blogspot.com/2007/05/war-against-true-enemy-of-comic-books.html. (That post is 13 years old and just as relevant today!)

I have to confess that I'm not a big fan of digital comics. I have several reasons for that, but they mostly boil down to "I grew up reading paper comics, and I intend to die reading paper comics." That's looking increasingly likely in the current COVID-19 era.

That said, digital comics have long had their fans, and now they have a few benefits that old-fashioned paper comics, or "floppies," don't. With so many comic shops and publishers still shuttered, digital comics allow you to remain socially distant and disease-free (assuming no one else is using your keyboard) while still supporting the companies and artists whose work you enjoy. It's a win-win in an otherwise uncertain world.

Which brings me to the DC Universe streaming service. I think it's a great boon for DC fans looking to scratch their super-hero itch. While it would be easy for them to focus on the A-listers like Batman, Superman, Wonder Woman and the Justice League, they also manage to support the lesser known heroes, like Booster Gold.

Why is Booster Gold the perfect agent to protect the timeline? Because he's the last person you'd ever expect to be crucially important to its survival. To keep time bandits from interfering with Booster's work, his crucial time traveling missions must be kept absolutely secret… making Booster Gold the first great Super Hero whose secret identity is an incompetent Super Hero. But with all of time at his fingertips, can Booster avoid the pitfalls of trying to "fix" the tragedies which must come to pass? And if not, will the timeline himself even let him succeed? And what exactly is the mysterious connection between Booster Gold and his Time Master mentor, Rip Hunter? All will be revealed, or at least alluded to, in esoteric continuity clues scrawled onto chalkboards. Whether you're obsessed with continuity or merely the idea of it, this series is a comic binger's dream.

He's right. It's a pretty good series, especially for DC continuity nuts like me. I think I'll go re-read the series myself. And maybe I'll do it digitally. I'd hate to risk getting virus all over my longboxes.

It caught my attention earlier this week that DC Universe Online, the massive multiplayer online video game from Daybreak Game Company (formerly Sony Online Entertainment), is celebrating its 6th anniversary. No celebration of time would be complete without Booster Gold!

Booster Gold is filling up Time Capsules with lots of useful and exciting items to send through the Multiverse to you!

The current in-game event where you can earn Stabilizer Fragments is "Antimatter Research." The Anti-Monitor is sending his Qwardian allies to weaken the Earth, and it is up to you to stop them.

Once you use a stabilizer to open a capsule, you'll see what sort of goodies Booster Gold has sent to you!

These Time Capsules first appeared in August of 2016, meaning that in recent months, Booster Gold has appeared on television shows and in video games, but not comic books. I didn't think I'd live to see the day!