Now I Think DC Is Just Messing with Us

First Booster Gold showed up on the cover of Futures End #25, despite appearing nowhere in the book. Then he was on the cover of last week's Smallville: Continuity #1 without participating in that issue. Now, DC has announced that March will be "Movie Cover" theme month, including this cover featured on Buzzfeed.com: 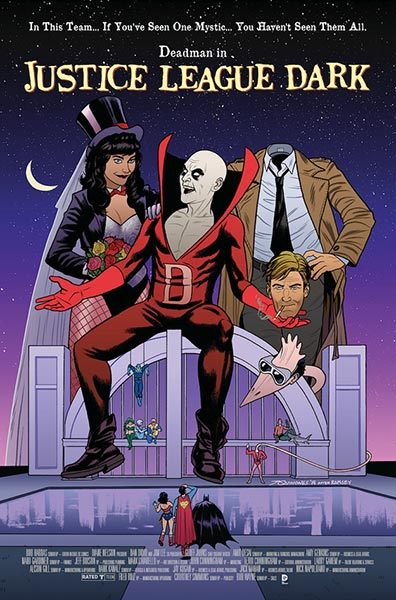 Can you see the little Blue and Gold and Fire and Ice sitting on the Hall of Justice between Beetlejuice's Deadman's legs? That's the variant cover by Joe Quinones. The regular cover gives no hint that the classic JLI are around, but perhaps the solicitation does:

They've been to the edge of time and back again, but now the arcane forces with which they've fought will make one last attempt at eradicating the Justice League Dark from existence. Major changes are in store as the team faces its final fate!

Will those "major changes" include an appearance by the JLI? Doubtful, but I guess we'll find out for sure on March 25. Thanks to Swingin' Around for the spot.