Booster Gold selected August 21, 1985, to make his public debut because he knew that was the day an assassin would make an attempt on the life of United States President Ronald Reagan. But what if Booster had chosen another red-letter day in American presidential history to make his debut?

Before election day, November 2, 1948, incumbent president Harry Truman was polling far behind his challenger, Thomas Dewey. No one outside of Truman's camp thought the President could pull out a second term. So remote were Truman's chances, that the Chicago Daily Tribune printed a headline declaring Dewey champion before the results were in. 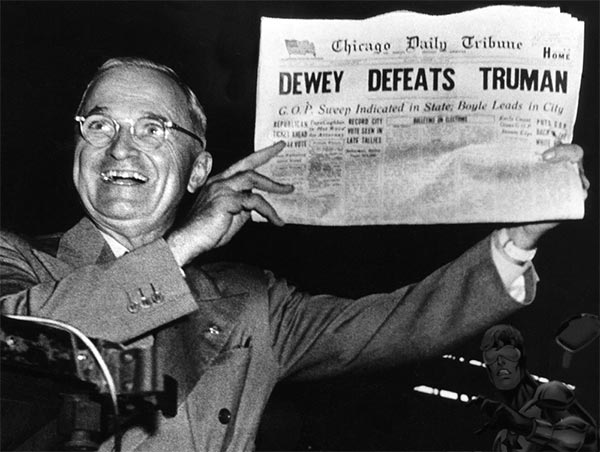 Booster Gold could have earned a friend in high office and the general public alike if he'd arrived from the future and publicly thrown his support behind Truman, whose campaign against a "Do Nothing Congress" resonated with voters.

Of course, Truman's second term saw the Soviets get the Bomb, the war in Korean, McCarthy's Red Scare, and the Kefauver Committee against organized crime in America. Worse, 1948 saw the emergence of Fredric Wertham's campaign against super heroes. Maybe Booster decided that was all just too much trouble for one hero.

Or maybe a history student like Booster Gold preferred to make his debut closer to the dawn of the 90s, when technology would begin an unprecedented leap forward. It would be awfully hard for a guy with a robot sidekick to live in an era of vacuum tubes.