"The second day of July, 1776, will be the most memorable epocha in the history of America. I am apt to believe that it will be celebrated by succeeding generations as the great anniversary festival."
-- John Adams

July 2, not July 4, is the actual date that the Second Continental Congress voted to secede from the British Empire. July 4 is the date that the declaration of that decision of independence was signed, and has since become the national Independence Day holiday. One would think that this sort of discrepancy, coupled with the significance of the event, would cause the time period to attract trouble. And it has. 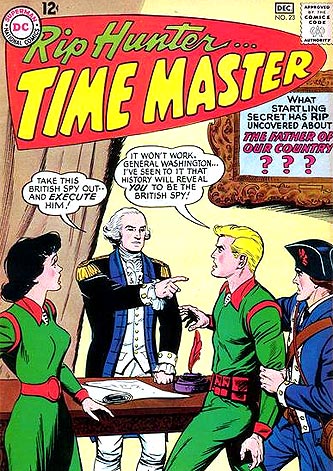 TGB posted on Jul. 2, 2010 at 9:45 PM
I would argue that Booster Gold is a truer American hero than most others. Check out my blog!

Boosterrific [Official Comment] posted on Jul. 2, 2010 at 10:50 PM
I swear I thought these comment forms worked until you got your hands on them, TGB. I see that your link from your name works, so I know that works as it should. Are you saying that you had trouble inserting an html <a> link in the comment field itself? Oh, just what I wanted to do for Independence Day: bug hunt. Heh. Though I suppose nothing is more patriotic than repelling invaders and saboteurs.

Boosterrific [Official Comment] posted on Jul. 2, 2010 at 10:57 PM
And now that I've read your column, I must say that I like the parallel of Booster Gold as Paris Hilton. (Sorry, I would've posted at your comments form, TGB, but Google threw me an error and deleted my comment when I tried to post. Made me feel not so terrible about my comment form, that's for sure.)

Boosterrific [Official Comment] posted on Jul. 3, 2010 at 1:30 AM
What? You don't think I'd really put your email address out there for spam-bots to discover, do you? Oooh, no, sir!

But seriously, no need to apologize. I don't make it clear what I'm doing with your link on the comment form, so how would you have known? As a partial solution, I've gone ahead and bold-faced your name to indicate that it is a url link. That's how some other comments forms do it, so we'll try it their way. If that turns out not to be good enough, I'll tweak it some more.