This Day in History: History Repeats Itself

Booster Gold had been erased from time through the events of earlier issues, and this issue doesn't actually show Booster return. However, he's around for Extreme Justice #0 a few months later, so I think we can safely assume he got back just fine. Here's hoping he can repeat that feat by 2014!

Over the years Zero Hours has been much criticized as a mediocre event used to justify rewriting the convoluted history of the DC Universe. In that way it was similar to Flashpoint. 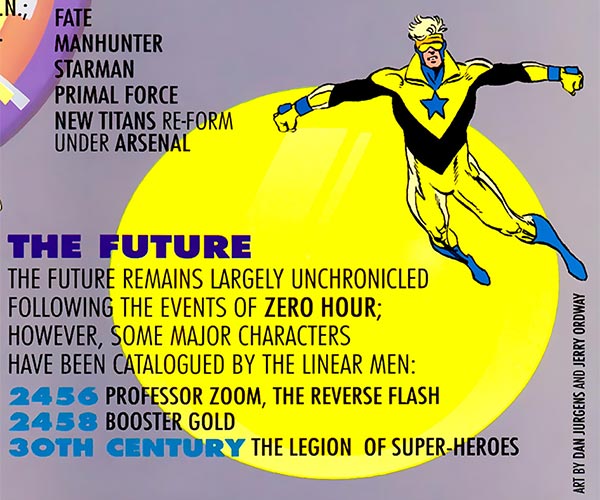 Where Zero Hour is drastically superior to Flashpoint is in the fold-out timeline on the back cover that shows explicitly what history had been changed by the event. Two years into the New 52, we still don't have any such guide for whatever nebulous changes Flashpoint made.

It isn't surprising that history repeats itself. It's just interesting to see the new wrinkles as it does so.

Grimmy posted on Aug. 10, 2013 at 1:53 AM
Dude, I can't believe no one has commented on this (whats wrong with you people?!?) The new52 is nothing more than a hyped up money grab (which in my case worked like a charm) and I (being ambivalent about continuity) ignore all the "these guys are only 12 years old again" BS and just read the compelling stories in Batman, Flash and Dial H (which just got cancelled dammit). People get what they ask for, which is why McDonalds is the number one restaurant in the world, and Justice League of WECANTGET ALONG is the number one book at DC and sports figures who act the worst make the most money. Nobody makes money, unless we give it to them, SHAME!!!

WonderCon 2013 was this past weekend, and DC went ahead and made it official that Booster Gold will be guest-starring in All-Star Western #19-21. Our pal Russ Burlingame at ComicBook.com reports writer Jimmy Palmiotti's quote from the "DC All Access Panel" yesterday:

In the next issue of Jonah Hex, we have a special guest... running around with Jonah Hex will be none other than Booster Gold.

You can read details from the whole panel at Newsarama.com, but the fact that Booster will be in All-Star Western isn't really new news. However, something else I found reported from WonderCon is a little more exciting.

AnotherMealTicket.com reports that the "f" in the "WTF" issues appearing this month from DC will stand for "Flashpoint," and it seems that Booster won't just be travelling across the DCU, he'll be remembering it:

...Inside sources at DC were overheard this weekend at WonderCon 2013 saying we should expect to see plenty of the mysterious Pandora and finally hear Booster Gold admit that he remembers the old DC Universe!

It's about time! Thanks to MetalWoman and Morgenstern for posting the news in the Boosterrific Forum.

Boosterrific [Official Comment] posted on Apr. 1, 2013 at 10:47 PM
Eyz, if it were an April Fool's Day joke, would Bleeding Cool have the same story?
www.bleedingcool.com/2013/04/01/what-the-flashpoint-whats-booster-gold-up-to/

The final issues of Booster Gold Vol. 2 hit the stands again today, collected in the Flashpoint: the World of Flashpoint Featuring Superman. That title may seem unnecessarily long, but then so did Flashpoint.

Other than Booster Gold issues #44 through #47, the collection includes The Canterbury Cricket one-shot and the complete Project Superman and World of Flashpoint mini-series. With a retail price of $17.99, that's eleven comics for the price of six! With pricing like this, why would anyone bother buying individual issues anymore?

If you have any interest in the expanded Flashpoint universe, you can't fault the value here. This volume contains the last appearance of Skeets to date if nothing else. Buy this collection and let DC know that you want more Skeets.

And even those four Booster Gold Comics leave a bitter aftertaste in my mouth, knowing that this is how the volume ends.

Boosterrific [Official Comment] posted on Mar. 14, 2012 at 2:31 PM
Wow, you're a grouchy bunch today! Just think, since DC is the new Marvel, in 10 years, we'll get a whole assortment of FLASHPOINT-themed anniversary issues about what has been happening in that universe during the intervening time. (That's a joke, DC. Please, no.)

Jesster posted on Mar. 14, 2012 at 5:45 PM
If DC is the new Marvel then I shudder to think what Marvel must be now.
Dear DC: More Skeets Immediately. That is all.

Nowen posted on Mar. 18, 2012 at 12:32 PM
Why did they do this? Now I'm going to have one random ass Flashpoint book mixed in with my Booster Gold collection. Why couldn't they have just released the last few issues in their own separate book? Damn you DC damn you.

Today marks the end of the DCU, as represented by Flashpoint #5, and the dawn of the DCnU, to be seen in Justice League, Volume 2, #1. It seems very unlikely that Booster Gold will appear in either book, though both affect his stories. By this time, I'm sure anyone reading this has an opinion about the Great DC Reboot of 2010, so buy them or not: Skeets is indifferent.

Readers love 'em, as evidenced by the fact that they sell like wildfire. But event books -- those mega summer crossovers -- have treated Booster Gold very poorly.

Booster lost his wealth and his title to Millennium. He temporarily ceased to exist in Zero Hour. Identity Crisis -- admittedly a downer for everyone in the DCU thanks to the the inferiority-complex driven rapist super villain and the ethically challenged heroes as a glorified red herring -- killed his relationship with Firehawk. Infinite Crisis went a step further and killed his best friend. And now Flashpoint has him failing at his job and losing his second title.

Those don't even include losing his powers to "Death of Superman" or his sidekick to evil in 52, both of which are more media stunts than event-driven mini-series. (If "Death of Superman" were done today, there would be 14 tie-in mini-series.) Booster should probably count his blessings that his involvement in Underworld Unleashed and Final Crisis was so limited.

Kevin posted on Aug. 18, 2011 at 12:00 PM
Infinite Crisis brought about 52, otherwise known as the start of Booster's glory days (with Skeets returning to live) and the creation of his Vol. 2. Blackest Night, allowed Booster to put the ghosts of Ted to rest at long last. Flashpoint did not see him fail (how can you say he failed when you haven't even seen the final issue yet?) and also leads to him being the leader of the Justice League International, which puts him squarely as a near A-Level hero now.

Besides, all events cause badness for the heroes...if they were all about roses and happiness, then they wouldn't be interesting, would they?

I loved 52, and we don't get to 52 without DC trying to further cash in on INFINITE CRISIS. INFINITE CRISIS was itself a very entertaining story with a lot of positives for a lot of characters. But don't forget that it killed Ted Kord to make Max Lord "Evil." Booster's role in the story was merely to involve the new Blue Beetle, himself a Deus Ex Machina device: new character debuts with exactly the power needed to defeat the machine that Batman can't beat! Argue anything else you want to about it, but in terms of character development: the key element for Booster Gold in INFINITE CRISIS is that it killed his best friend.

I will agree that it's fair to say that I don't know the ultimate outcome of FLASHPOINT, but DC hasn't exactly been subtle about the fact that it will mark a turning point in DC Universe history. How can he be a success in maintaining history when history will be changed at the end of the series? Is your argument that Booster was supposed to participate in FLASHPOINT and time was supposed to change around him? From that fatalistic point of view, Booster was doomed to fail, but still he failed.

I like the sound of Booster Gold called an A-Level hero, but I don't believe it for a second. A team with Guy Gardner, Fire, Ice, Rocket Red, Godiva, August General and Vixen is not a squad of A-listers, which is probably a good thing. I think you'll find that a team of B's is a far, far better read because the characters can be challenged and developed in ways that A-level characters cannot. But I refuse to get excited about a book where Booster is a 1/8 of a team after the cancellation of a title where Booster was featured in 100% of the adventures. Replace Booster in your argument with Batman, a popular character shoe-horned into JLI in a blatant attempt to cash-in on his rampant popularity. If DC had just cancelled BATMAN to put the character on JUSTICE LEAGUE, would a Batman fan be excited about that?


Kevin posted on Aug. 18, 2011 at 3:40 PM
No, but Booster didn't have Batman's popularity, did he? Let's be honest...the numbers for Booster's book SUCKED by the end. It was going to get canceled. But instead of shunting Booster off like they did in the 90s, they are making him the leader of a Justice League team. A book that has been one of the top ten books DC has been soliting each month. For Booster this is a GIANT step up, better than merely having a self-titled series that sold low. You also forget that it is being written by the man that created Booster.

But of course, if you've already made up you mind to hate something before even reading it, that wouldn't really matter, would it?

Boosterrific [Official Comment] posted on Aug. 18, 2011 at 4:50 PM
First, yes, Booster's book was selling poorly, but not because I wasn't buying it. I never said I wasn't looking forward to JUSTICE LEAGUE INTERNATIONAL. I merely said that I was disappointed by the cancellation of BOOSTER GOLD. If you loved chocolate ice cream but discovered that the only available ice cream parlor didn't carry chocolate ice cream, would you be excited that you had to settle for Neapolitan ice cream to get your chocolate fix? You are asking me to be excited by a diluted form of something I enjoyed. I'll take it, I have no choice. However, that doesn't lessen my disappointment.

Second, no, I have not forgotten that Jurgens will be writing the book, but that doesn't give me cause for excitement. With all due respect to Dan Jurgens, his work on team books has never impressed me. His work on JUSTICE LEAGUE AMERICA in 1992 focused on inter-squad squabbles and battles with aliens at the expense of realistic characterization. TEEN TITANS in 1996 was a weaker effort, attempting to give voice to the angst of super-powered teens in the eXtreme 1990s and instead creating a team of cardboard stereotypes. Like everyone else, Dan Jurgens has strengths; I do not consider writing team books to be among them.