Gone with the Wind was a huge smash hit in 1939. Adjusting for inflation, it's still the biggest blockbuster of all time — by 200 million dollars! Isn't it ironic that a movie sympathetic to the antebellum South would be the catalyst for the first African-American to win an Academy Award on February 29, 1940?

Back then, the Academy Awards still tended to reward movies that people had actually seen in theaters. The financial success of Gone with the Wind carried over into eight Oscar wins, including Best Supporting Actress for Hattie McDaniel, the movie's delightful "Mammy." 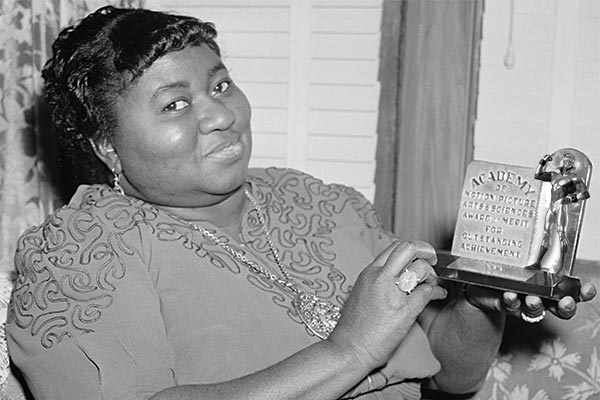 There's a long-standing, unsubstantiated rumor that Mexican actor Emilio "El Indio" Fernandez was the model for the now-familiar Oscar award first introduced in 1929. However, you can't help but notice the similarity between the famous golden statuette and a certain, golden time-traveler ("The Greatest Model You've Never Heard Of").

Given how much attention has been given lately to the Academy's preference for lily-white talent, ask yourself which is more far-fetched: that the Academy Award of Merit was modeled on a white time-traveler or that it was based on a Mexican? You be the judge.