Frequent Boosterrific.com commenter Eyz recently reviewed the Eaglemoss Booster Gold figurine on his blog G33k Life. (Most of you probably know Eyz from his Heroes! parody comic strips.) The statuette was produced in September 2009 as the 20th in a series of licensed DC Comics characters especially for the European market. Eyz was kind enough to share some information about the accompanying DC Super Hero Figure Collectible Magazine for inclusion on Boosterrific.com:

"The DC magazines that come with the figurines all use the same template, that is 20 pages in full colors of bio and various information. Basically, it's sort of what you'd find on Wikipedia but only illustrated by various scans. (Well, more like Boosterrific itself in that regards!)" 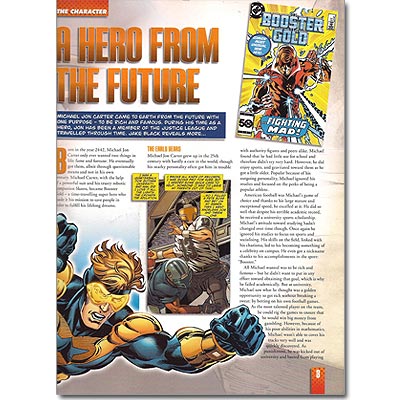 "Then there's a 3 pages spread 'Classic Storylines' narrating important moments of the character. For Booster it concerns the original arc against the 100 and then 52!"

"After that, there are 3 pages on allies & enemies -- Max, Ted Kord, Jaime, Rip Hunter, etc. -- with pictures and all as well. This is followed by a double page spread on his costume and powers." 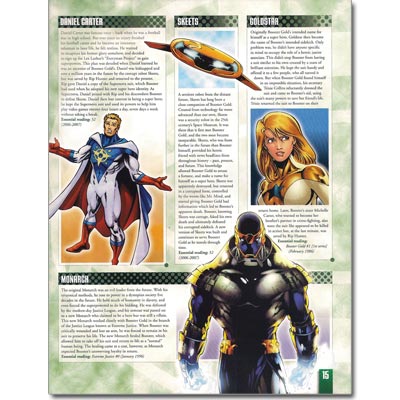 "The last two pages are the same for all figurines/characters. It's the 'DC Comics Timeline', narrating the whole DC Universe from the creation of the universe, medieval times with Etrigan, the old west, etc. [The timeline section] in Booster's magazine is 'Part 11: 10,000 to 9,000 Years ago'."

Big thanks to Eyz for the details.

Shawn posted on Aug. 1, 2011 at 11:36 AM
A good read but full of inacuracies, it's like the author was making up things as he went. The figure's allright except the black power bracelets

Eyz posted on Aug. 2, 2011 at 3:15 AM
I find the books pretty decent :)
They're supposed to work as an introduction to these characters, most people who are collecting these aren't that expert on everything DC/Marvel to begin with!

I'm a big fan of Blue Beetle for example. (even having bought and read a couple of times the Blue Beetle: Companion book) I found Beetle's book pretty good, a light read into the history of Ted Kord, even if it missed details and trivia.

On other hands, books on more popular characters with bigger history, like Superman or Spider-man are the less organized and clearer ones. Following Supes history in so little pages was much more of a mess than the Booster one!