It's that time of year again when thousands of pop culture fans flood San Diego. That's right, it's time for Comic-Con!

The picture above of a gender-flipped JLI was taken by David "DTJAAAAM" Ngo at last year's Comic-Con. You can find more of Ngo's cosplay pics at his website, www.dtjaaaam.com. Who knows what his lens will find this year?

You can find the whole @Midnight episode online at cc.com. (Be warned. It's funny, but its got some salty language.)

I really wish I'd found this sooner: 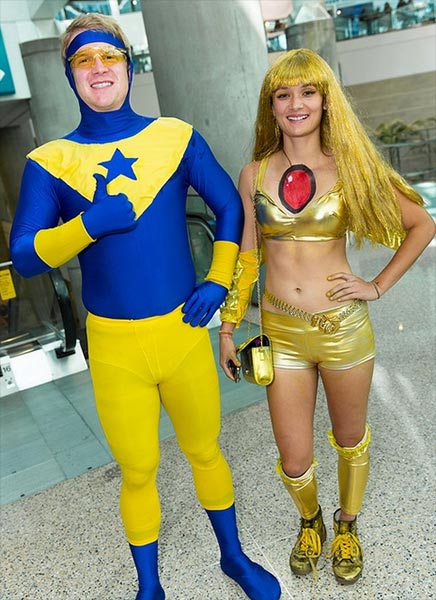 On DeviantArt.com, cosplayer Vanessa takes credit for her role as a humanoid Skeets:

This is from about a year back [at Stan Lee's Comikaze Expo 2013] where my bf and I were Booster Gold and a humanoid Skeets at Comikaze. :D It was our first cosplay and we really didn't know what the hell we were doing. Only one person got that I was Skeets (lol), but after I told the admiring Booster Gold fans, they were very excited. I've never seen a Skeets cosplay, so I thought I was pretty darn original, and the people who got it loved it. The best part was that every time I sat down I would leave a glittering gold butt print. It was great.

What a great idea!

The photo was taken by David Ngo, whose cosplay galleries on Flickr.com are truly staggering. You can see more of Vanessa's ideas at Fatalist555.DeviantArt.com.