This week DC released Bizarro Comics: The Deluxe Edition, which is a collection of two earlier collections, Bizaro Comics and Bizarro World. Booster Gold makes a very brief cameo in the former:

Granted, that panel might not be significant enough to encourage you to buy a $50 book, but it's not the smallest Booster Gold appearance this week. That honor belongs to Teen Titans Academy #5:

No, he's not Red X. (At least, I don't think so.) Look under the "W" on the bulletin board. That golden hair couldn't possibly belong to anyone else!

To prove I'm not crazy (about this), here's the better look at the bulletin board we got in last month's previous issue: 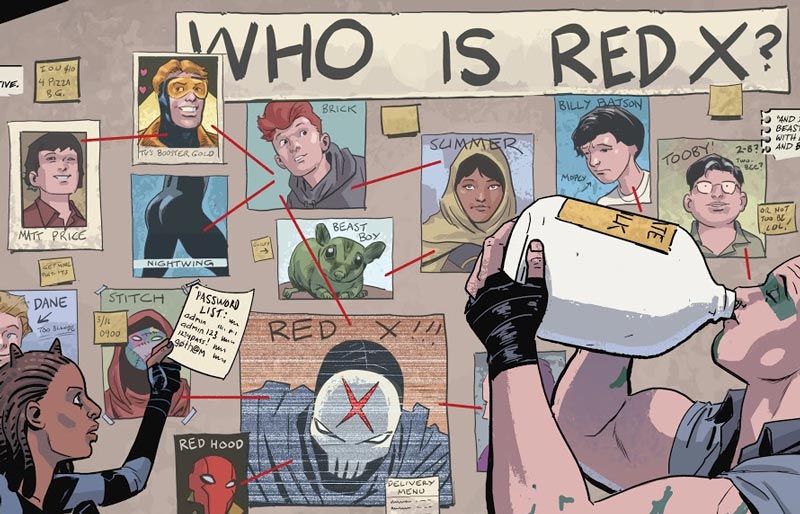 Thanks to Logan for bringing that panel to our attention. I can't imagine a Booster cameo getting much smaller than that.

For the record, that's not the only Booster in Teen Titans Academy #5. Blue and Gold appear twice in this house ads, once in the Infinite Frontier promotion that's now on it's third week, and once in Director Bones' newest Multiversal Monitor.

Catching Up on Solicitations

I've already covered Booster Gold's appearance in the upcoming Generations Forged (due February 23), but that's not the only BG appearance included in DC's February solicitation as provided by GamesRadar.com.

First up is the collected edition of Booster's recent guest-starring role in Batman Beyond #47, #48, and #49:

BATMAN BEYOND VOL. 8: THE ERADICATION AGENDA TP
written by DAN JURGENS art by SEAN CHEN, SEAN PARSON, PAUL PELLETIER, and NORM RAPMUND
In the final volume of Batman Beyond, Batman and Batman Beyond meet at least, with Booster Gold caught in the middle! But first, Terry McGinnis forges an uneasy alliance with Damian Wayne in order to stop Mr. Zero and his radical faction from turning Gotham City into an ice-covered hellscape. To set things right, Batman, Damian, and Batwoman Beyond must declare war on the League of Assassins! And one more thing: Inque returns, posing as Batman and wreaking havoc in Gotham City! Collects Batman Beyond #43-50.
On sale March 16, 2021

But that's not all!

Whew! That's a lot of comics in one book. I recommend reading it at a table. If you try to read it in your lap, you might lose circulation in your legs.

And, since we were very recently on the subject, I should mention that BleedingCool.com has uncovered that a new edition of Bizarro Comics is coming in the summer:

BIZARRO COMICS THE DELUXE EDITION
Comic icons come together to tell the strange and wonderful tales of BIZARRO! The tales of Superman's twisted doppelganger, BIZARRO, are collected in this brilliant deluxe edition format! Follow along as Bizarro decides to publish his own comics from BIZARRO COMICS HC #1 and through the strange and wonderful tales told in BIZARRO WORLD!
On sale June 22, 2021

(Bleeding Cool also alerts us to an upcoming 10th Anniversary collection for the New 52 relaunch due in August, but so far it looks like it will just be a select few titles and will not include Booster Gold's Justice League International. I'll be sure to let you know if that changes.)

Obviously none of those are new Booster Gold appearances, but I'm sure many of these books will introduce Booster to new audiences, and that's a good thing, too.

Booster Gold Am Not Here

For many reasons (not the least of which was that as a poor college student I didn't have $30 in discretionary funding to spend at that time), I didn't pick up Bizarro Comics when it was released in 2001. I only finally read it last week, and was pleasantly surprised to find Booster Gold making a very brief cameo appearance when Mr. Mxyzptlk takes a look at what goes on inside Bizzaro's addled brain.

My brain might be just as addled. I've always thought that "Metropolis' Golden Guardian" would be a great nickname for Booster Gold... if it wasn't already the name of another DC character!

Jim Harper debuted as the shield-carrying policeman known as Guardian in 1942, but his clone used the "Golden Guardian" name in the 1970s. They were originally created and named by the comic book gods Joe Simon and Jack Kirby, you know, the same guys who get credit for a certain shield-carrying super soldier.

Of course, that pedigree and seniority only carry weight if you respect them. if Booster really wanted the title, he'd just take it. Maybe I should, too.