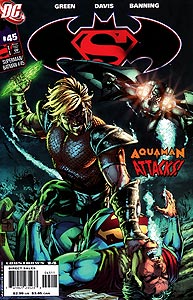 Cover Description: Aquaman II attacks Superman underwater with a piece of Kryptonite while Batman rushes to Superman's the rescue. (No Booster Gold.)

Brief Synopsis: Batman and Superman engage on a worldwide hunt to collect all the kryptonite fragments on Earth.

Page 4, panel 1
Aboard the Justice League's orbiting headquarters, Booster Gold waits his turn in line to meet with Superman. Other heroes clearly visible in the Watchtower in this panel are Batman, Firestorm V, Hawkgirl II, Martian Manhunter, and Starfire.

Page 4, panel 3
Booster indicates that he recovered a fragment of kryptonite in Molepolole, Botswana, a location that he had "never even heard of" until presumably Superman had asked him to recover the kryptonite. Botswana is a country in southern Africa, landlocked in the Kalahari Desert. Molepolole is a culturally significant city in the country, home to the Bakwena tribe of the country's ethnic majority Tswana people. It's no surprise that Booster has never heard of the city, as even in the 21st century it is not uncommon for members of the area's dominant Bakwena tribe to trade cattle for goods and services, a currency in which Booster has never shown any interest. 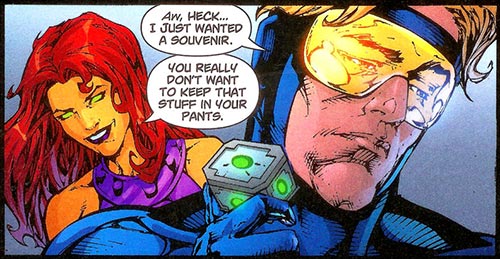 Page 4, panel 5
This is the second time that Booster has had his hands on kryptonite, and the second time that Booster has considered keeping it. (See Booster Gold, Vol. 1, #23 for details.) He might have gotten away with it, too, if it hadn't been for Batman's interference. (Note that in a previous panel, Superman gently rebuffed Firestorm's weak attempt to use the recovery of kryptonite to curry favor with the Justice League by calling Firestorm's participation in the kryptonite recovery operation an act of "friendship." Far more Machiavellian than the young Firestorm, Booster wisely kept his mouth shut about his motivations, but still failed to get away with a sliver of kryptonite.) Starfire's comment, "you really don't want to keep that stuff in your pants," is a reference to the fatal side-effect that naturally radioactive kryptonite has on human tissue.

Boosterrific Review: Issues of Superman/Batman often feel like unnecessarily extended stories based on Silver Age comic book covers, and this story is no exception. Sure it's fun to see the World's Finest hang out with the rest of the DC Universe, but somehow it always seems like the pair are taking the long way to solving all of their problems just to see how convoluted they can make each issue.