“Caution to the Wind, Part Two of Two: Blood Honor” 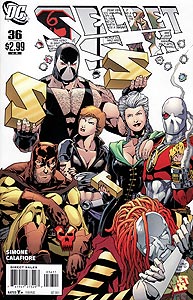 Cover Description: The Secret Six interact with their environment: a cover to their own comic book. (No Booster Gold.)

Brief Synopsis: The Secret Six find themselves in a stand-off with heroes that may spell the end for the team of villains.

Story Notes: This is the final issue of this series, canceled to allow for DC Comics' line-wide relaunch following the Flashpoint mini-series. 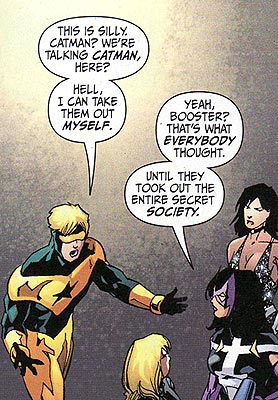 Page 17, panel 2
Just before the fight breaks out between the heroes and villains, Booster is seen standing near the previously unseen Dr. Light.

Page 19, panel 12
Following the battle, a battered Booster is tended to by Blue Beetle.

Boosterrific Review: Gail Simone's dialogue sparkles as always, but the events of this issue feel contrived, an ending shoehorned unnaturally into place for a book that is being canceled.