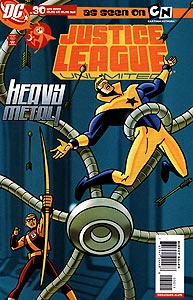 Page 1, panel 3
Booster Gold and Speedy are the only Justice League members on the League's satellite Watchtower. Come to think of it, if Speedy, the Green Arrow's sidekick, is a member of the Justice League, is Skeets?

Page 2, panel 3
Skeets knows English grammar. When Speedy refers to himself in the sentence, "me" is the predicate nominative and should therefore be the nominative first-person pronoun "I." And, of course, the personal pronoun should always come last in a series.

Page 2, panel 3
Skeets says Booster is writing a book, but he doesn't tell us what the book will be about. An autobiography, perhaps?

Page 8, panel 4
Booster knows football. This is the first of many references to American football in the issue. Punting is a specialized play in American football that surrenders possession of the ball in exchange for a a significant gain in field position. Punting is a common tactic when a team thinks that it will be unable to gain the required number of yards to maintain possession at the end of a series of downs.

Page 14, panel 1
Dr. Polaris knows chemistry. debates Skeets' non-ferrous composition. Earlier in the issue, Polaris had magnetically controlled Skeets, implying that Booster's sidekick contains at least some magnetic metal (such as iron, nickel, cobalt, or some alloy containing these or some other rare earth metal). This eliminates the possibility that Skeets is made of solid gold!

Page 14, panel 2
Booster does not know medicine. Booster's suggestion that Dr. Polaris' disassociative identity disorder (better known as multiple personality disorder) is a side effect of his brain constantly "reversing polarities" is not supported by medical science. (It sounds like Booster has been watching too much Star Trek.)

Page 16, panel 2
Speedy knows pop culture. The Apple iPod portable media player debuted in 2001. And as of 2007, they still couldn't fly. (Though the similarity in appearance between Skeets' eye and the signature iPod "click wheel" interface cannot be denied.)

Page 16, panel 3
Booster knows history! How is it that Booster Gold is lecturing Green Arrow's sidekick Speedy on archery lessons? Incidentally, the Battle of Agincourt was also the climax of William Shakespeare's play, Henry V.

Page 17, panel 1
Booster does not know physics. Booster's example of an arrow in space is fundamentally inaccurate. The force imparted to the arrow by the bow string is finite, and will be expended as soon as the arrow and string are no longer in contact with one another. Afterwards, the arrow will not continue to accelerate because there is no force to provide continued acceleration. Inertia in a near frictionless environment like space will ensure that the arrow continues to fly, but not that it continue to speed up.

Page 20, panel 5
After all is said and done, Batman, Superman, and Wonder Woman put in an appearance. I wonder what they know?